Today is Sunday, so it’s time to review the second new Code film which I watched this week. This is not only the seventh week in 2020 but the seventh week in PEPS’s series for discovering films from the American Breen Era (1934-1954) which we haven’t seen yet, 100 New Code Films. From comedies to dramas to musicals to historical pieces and so much more, there are countless Code films which I haven’t seen yet. By committing to watching 100 of these great, undiscovered films this year, I am making a dent in the reserve! 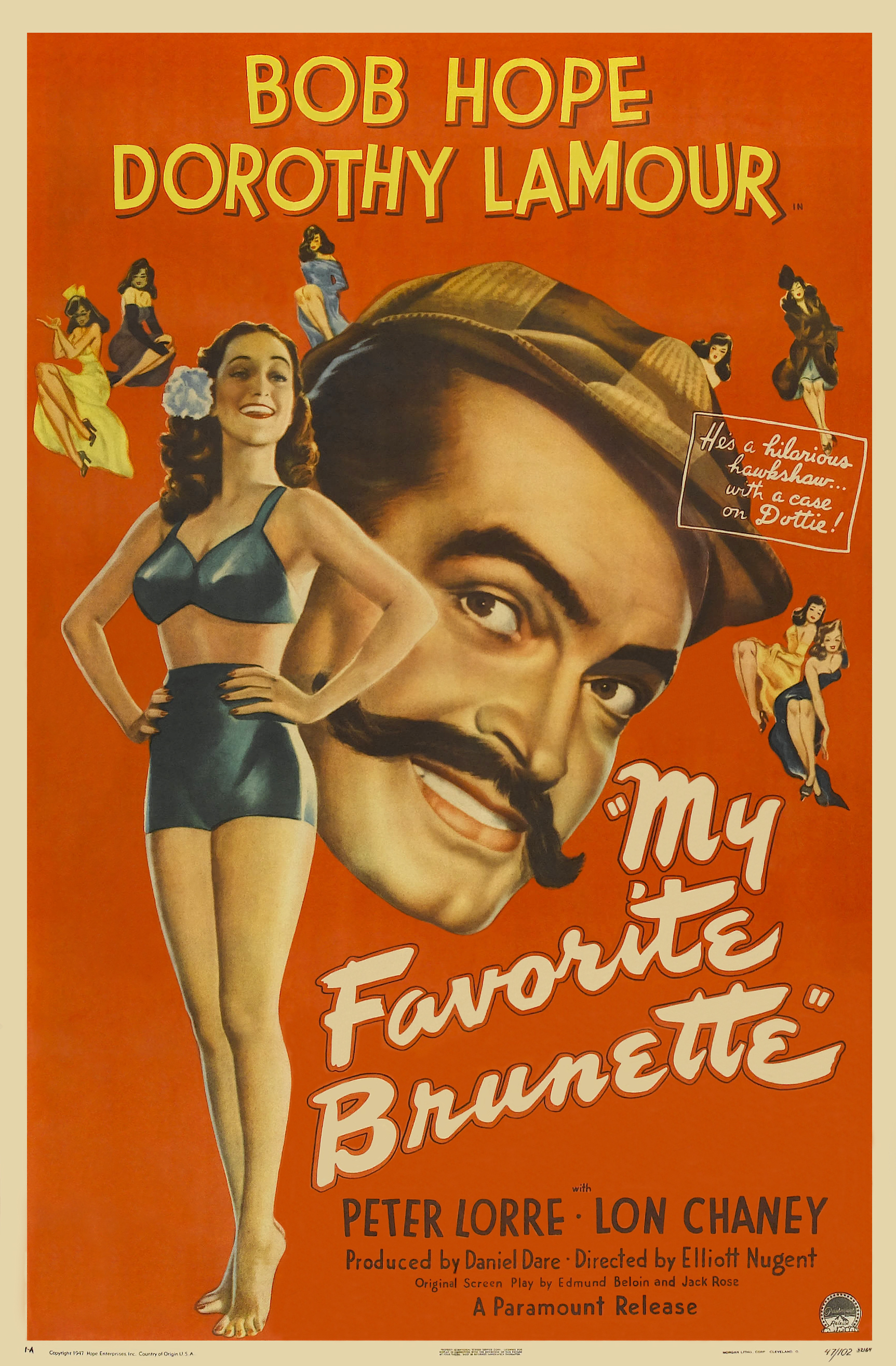 My topic for today is My Favorite Brunette from 1947. We have this movie on VHS in our collection, so I have considered it as an option for a new Code film for a few weeks. The premise described on the cover sounded hilarious, and I was eager to see another pairing of Bob Hope and Dorothy Lamour after reviewing the first Road movie two weeks ago, Road to Singapore from 1940. My friend Movie Critic left a comment on that article, mentioning how much she enjoyed another Bob Hope film, My Favorite Brunette. Her recommendation encouraged me to make this my second topic for this week. I watched this film this morning. 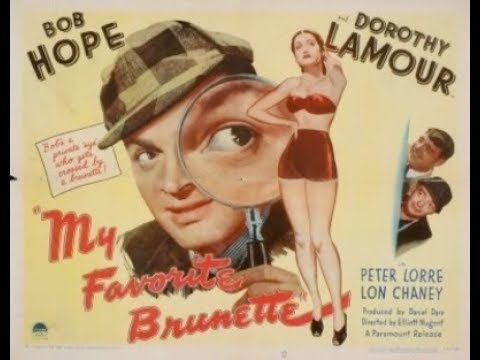 A baby photographer who has always wanted to be a detective gets his chance when a beautiful young baroness mistakes him for the private investigator who works next door but is away on business. Her uncle has gone missing, so she asks for the investigator’s help, giving him a map which he must guard with his life. Soon, the make-believe detective finds himself in the middle of a complex scheme involving valuable mineral deposits, disappearing imposters, planted clues, and murder attempts which may even send him to the chair! This film stars Bob Hope, Dorothy Lamour, Peter Lorre, and Lon Chaney Jr. Supporting actors include John Hoyt, Charles Dingle, Reginald Denny, Frank Puglia, and Alan Ladd in what is almost a cameo appearance as a detective. Bing Crosby appears in the final scene in a cameo role, spoofing his rivalry with Bob Hope in their Road Movies.

This film was directed by Elliott Nugent. It was produced by Daniel Dare. This was the first film produced by Hope Enterprises. It was distributed by Paramount Pictures.  The original screenplay was written by Edmund Beloin and Jack Rose. Bob Hope was an uncredited producer and contributing writer to the golf scenes. 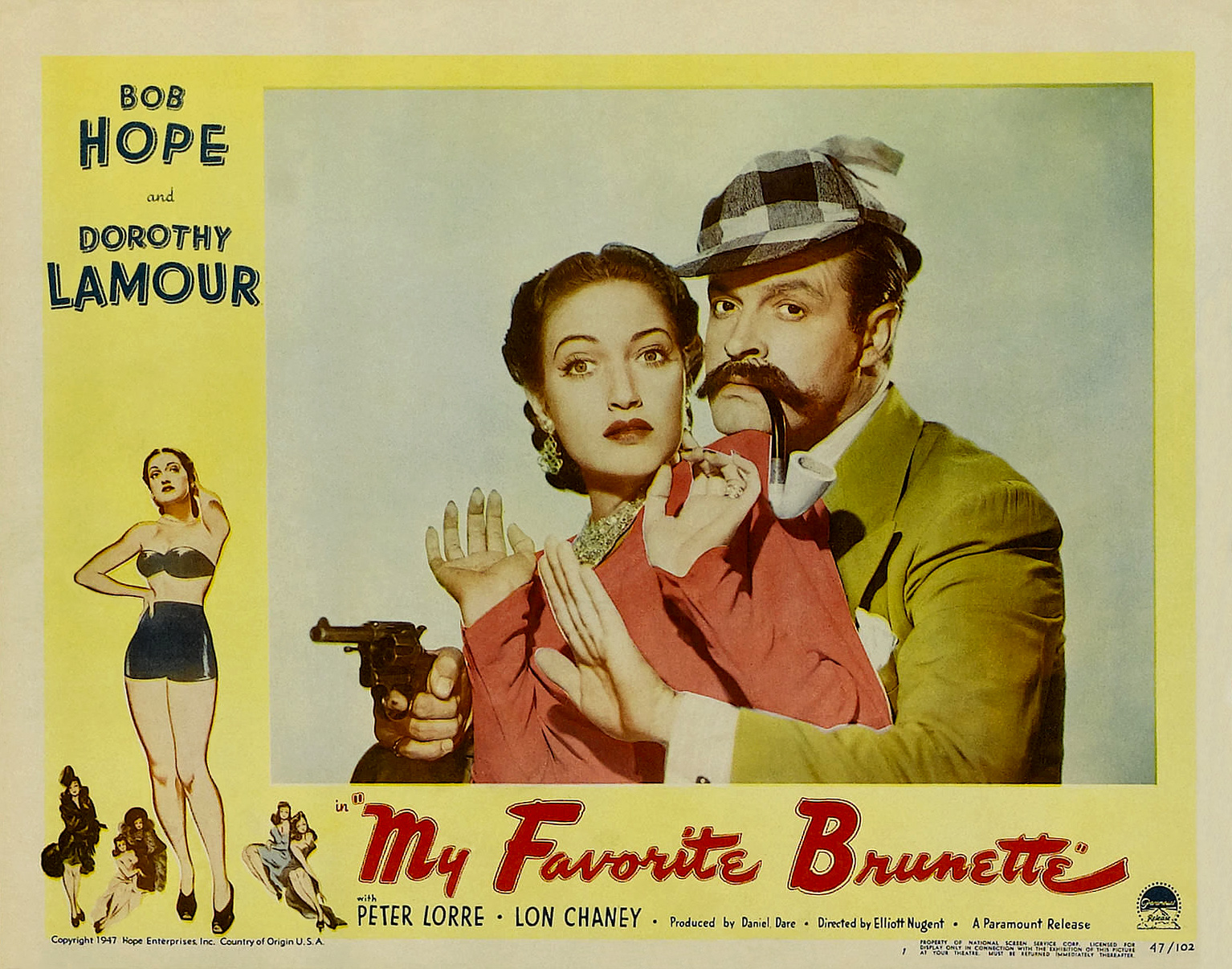 This is a good Code film. All the humor is entirely decent and appropriate. It has a lot of action, suspense, and danger, but there is no violence or graphic content. Despite the fact that she is wearing a two-piece bathing suit in all the promotional material, all Dorothy Lamour’s costumes are decent and covering. Bob Hope’s humor, though always hilarious, is never in poor taste. It is always completely clean. This movie shows that you can have high suspense, hilarious comedy, and a beautiful femme fatale without violence, crudeness, or risqueity of any kind. Such a feat is only possible, however, under the Code.

I highly recommend this film. It is hilarious! As the often scared but brave-at-heart photographer/detective, Bob Hope’s jokes fly as fast as murderous henchman Peter Lorre’s knives. Dorothy Lamour is mysterious and lovely as the baroness. She does a great job of keeping Bob’s character, as well as the audience, in suspense about whether or not she is right about the evil plot. She convincingly plays a woman who could be in grave danger or who could be insane! The assorted cast of crooks, from creepy Peter Lorre to oafish Lon Chaney Jr, provide an interesting backdrop to the action. Some particularly enjoyable scenes were the exciting car chase, the hilarious golf game with an invisible ball at a sanitarium, and Bob Hope’s masquerade as a bespectacled bellhop. If you want excitement with a good laugh to boot, look no further than My Favorite Brunette. It is a thrilling barrel of fun which the whole family can enjoy!