Today is Saturday, so it is about time for the first new Code film article of this week! Every week this year, I am trying to watch and review two American Breen Era (1934-1954) films I have never seen before. I then review them as part of my series 100 New Code Films. In this series, I seek out Code films which I have never seen before and then watch them to expand my knowledge of the era of decent entertainment. Then, I review them, listing their cast, production team, Code compliance and classification, basic plot, and whether or not I recommend them. I hope that this series will be interesting and informative for both me and my readers throughout 2020. 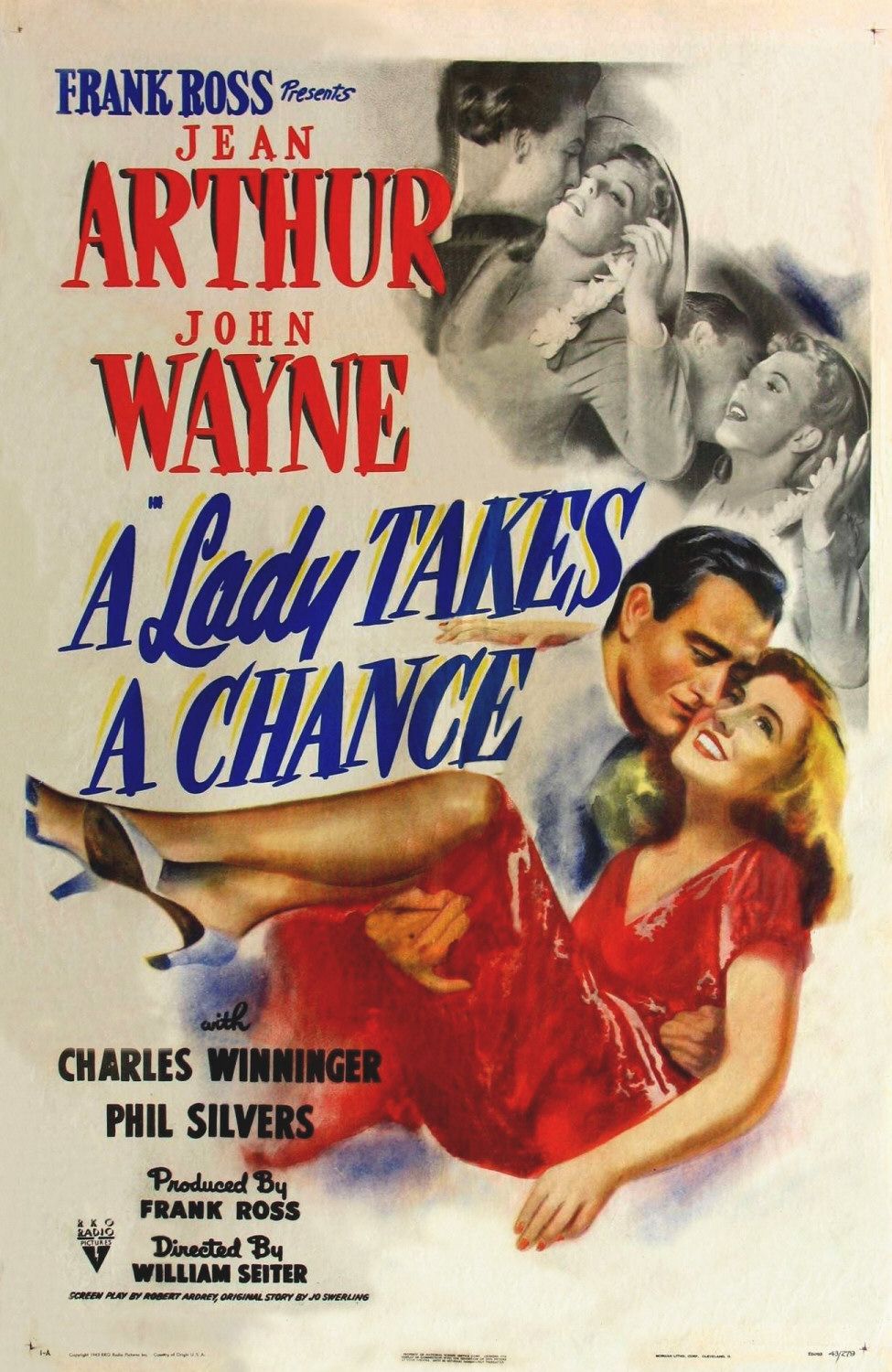 Today’s topic is A Lady Takes a Chance from 1943. This movie is free on Amazon Prime Video, so I added it to our watchlist a few weeks ago. I love Jean Arthur’s acting, and John Wayne is a very acclaimed actor whose work I am just beginning to explore. The premise sounded very cute when I read about it, so I decided to write about it this week as my first new Code film. I thought a lighthearted romantic comedy like this would be a nice change from the two dramatic Academy Award winners I reviewed last week. I watched this film on Sunday. 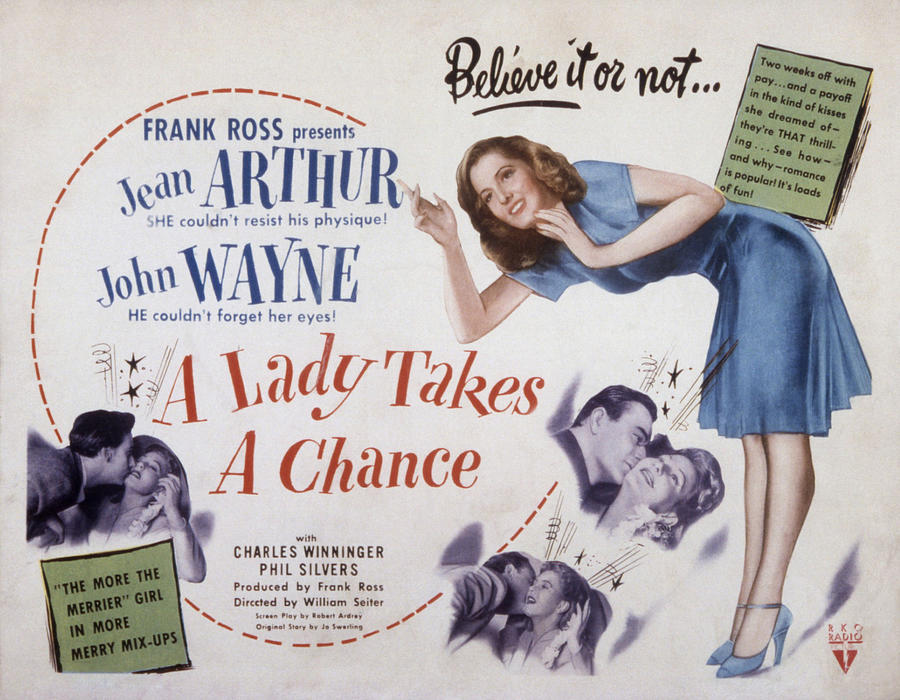 A popular city girl bids her three city beaux farewell to go on a two-week bus trip out west, all expenses included. She makes friends with another young lady on the bus, and the big-mouthed tour guide soon expresses his interest in her, but she finds the trip very long and not as exciting as she had hoped. Things become more interesting when she goes to a rodeo and breaks the fall of a handsome cowboy who falls off his horse. She is smitten at first sight, and they soon go out for a drink together. When she misses her bus, she has to stay in the Western town and get to know the cowboy better, but she soon realizes that she is interested in marriage, and he is not. Can she change his mind? 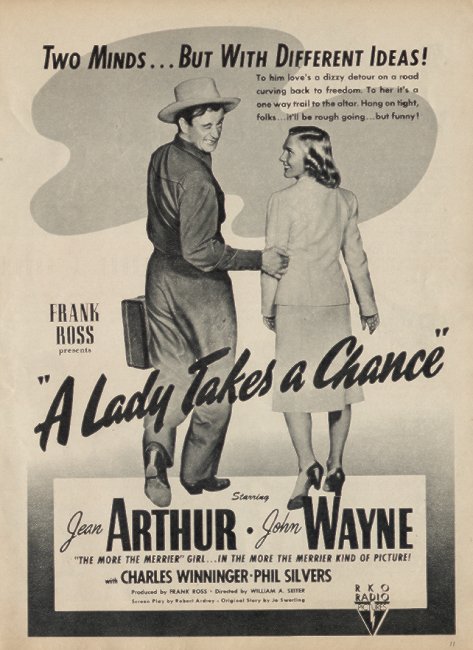 This movie was directed by William Seiter. It was produced by Frank Ross. The production company was RKO Radio Pictures. The screenplay was written by Robert Ardrey from a story by Jo Swerling. 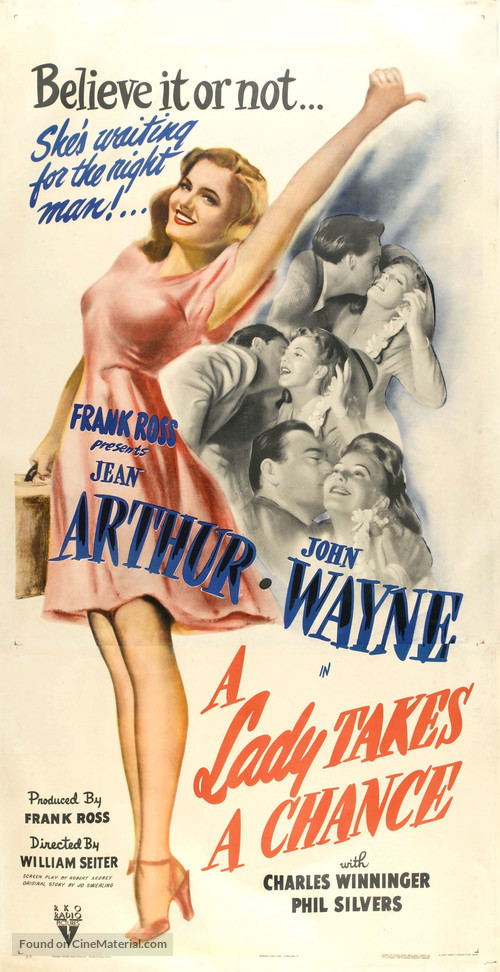 This is a good Code film. It is very wholesome, decent, and uplifting. It extols the virtues of morality and purity, especially among women. The way Jean Arthur’s decent girl keeps the cowboy in line is charming. By keeping her standards high, she will settle for nothing less than marriage. The way she tries to attract his interest is charming and so endearing. This movie has strong morals and a very decent surface. It is a great example of a Code romantic film. 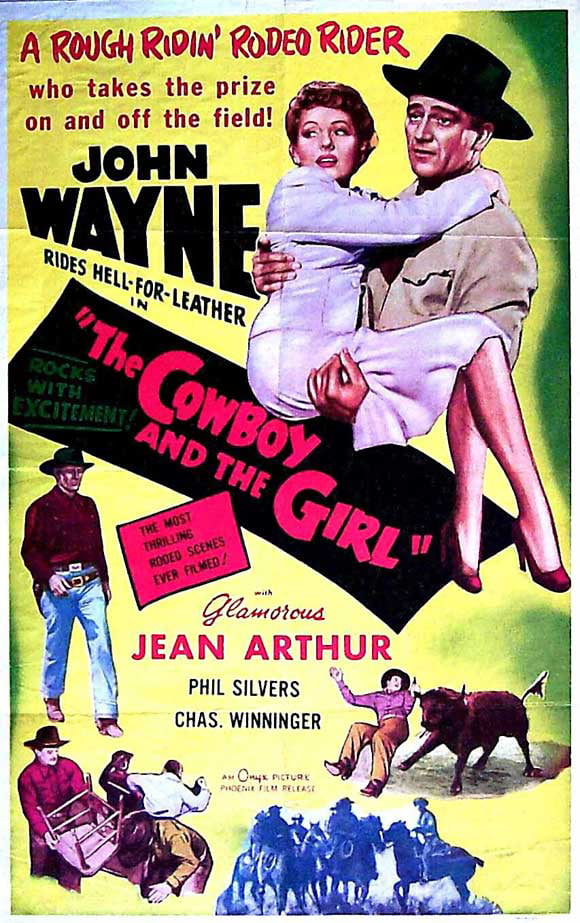 I highly recommend this film. It is so charming and entertaining. Jean Arthur is adorable in this role, and she interacts very well with John Wayne. This is the second film I have seen with John Wayne and my first time seeing him play a cowboy! He fully lives up to his reputation as the perfect cowboy. Charles Winninger, an ever-lovable supporting actor, is really funny and cute as Duke’s (John Wayne’s) side-kick. Phil Silvers has some very funny moments as the bus tour guide, as well. The rodeo scenes are very interesting. As well as being funny and romantic, there are some serious and dramatic moments which provide good contrast, such as when Duke fears for his beloved horse’s life. This is one of the cutest movies I have seen with Jean Arthur. If you like classic romantic comedies, you will really enjoy this film!