Since it is the last day in the fourth week of 2020, it is time for my seventh article in my new Code film series 100 New Code Films. This is the second new Code film I have watched and reviewed this week. Although watching two new American Breen Era (1934-1954) films which I have never seen before each week is quite a commitment, it is very enjoyable. It makes watching and discovering new classic films, something I love to do, part of my “job” of writing this website! There are so many acclaimed and more obscure films which I have yet to see. Every time I look at a classic actor, director, or writer’s filmography, I see many films of which I have never even heard before! A great start to discovering more of these yet-unknown greats is to commit to watching many new Code films. 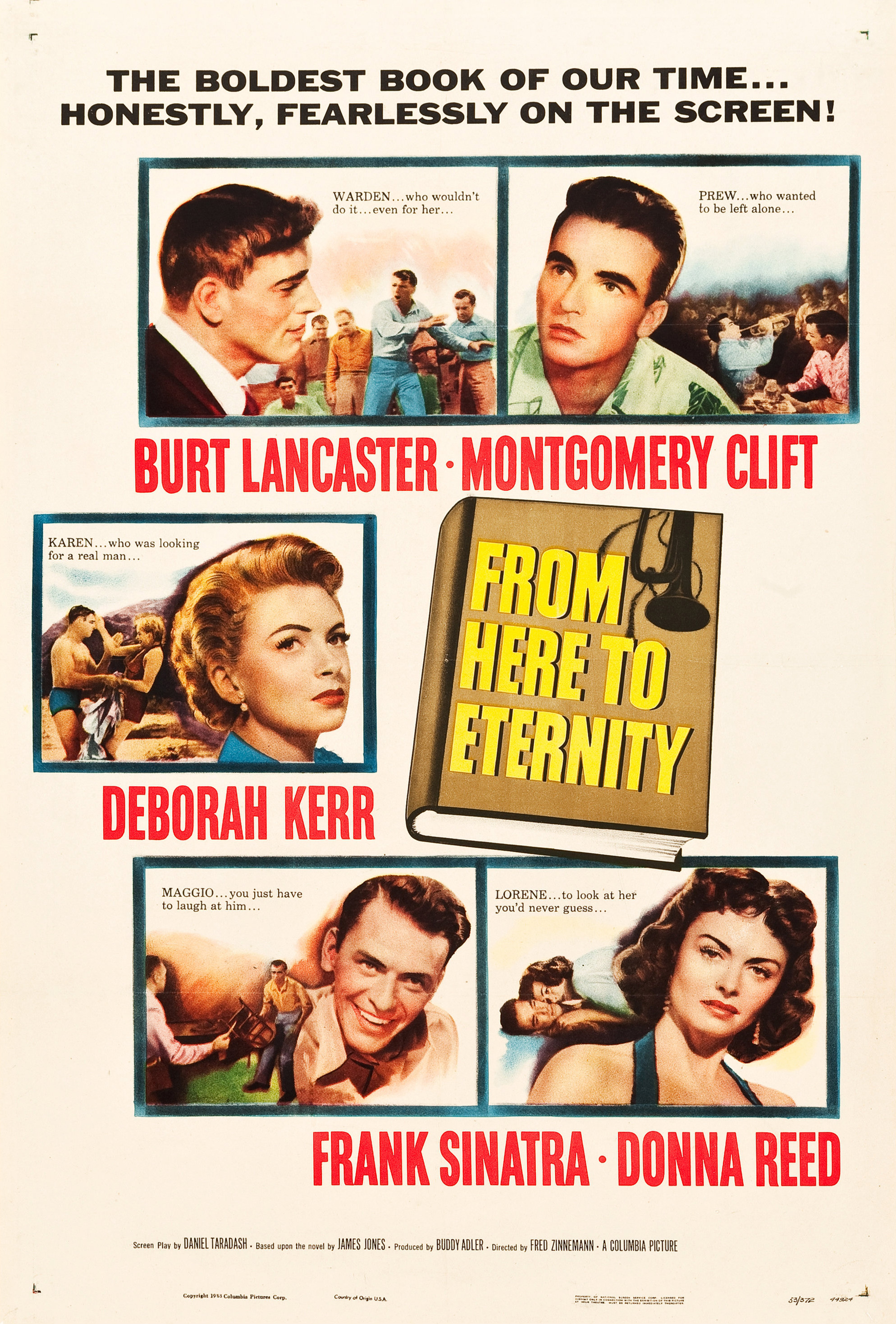 Today’s topic is From Here to Eternity from 1953. I was assigned to write an article for a formal publication about the 1954 Academy Awards, so I decided that I should watch the most prominent winning films which I had not seen. The most noteworthy film by far from that year is From Here to Eternity. As controversial as it was acclaimed, this pre-war drama is one of the films which is most often discussed in relation to the PCA. For a long time, I have been curious to see whether this film lived up to its hype and its controversy as a real Code-breaker. We have had this film on VHS is our collection for years, and I have wanted to watch it for a while but was apprehensive because of its heavy content. This assignment gave me a reason to watch it and check the second Oscar-acclaimed film off my list! I watched it on Monday evening. In 1941, an Army bugler arrives at a Hawaiian Army base, where he meets his old Italian friend. His old pal quickly proves his only ally at the base, since almost everyone else makes his life almost unbearable because he, a former boxing champion, refuses to join the boxing team. When on leave, he and his friend visit a club, where he meets and falls in love with a beautiful ambitious hostess with very definite plans for her life. Meanwhile, the sergeant at the base begins an affair with his commanding officer’s discontented and troubled wife. 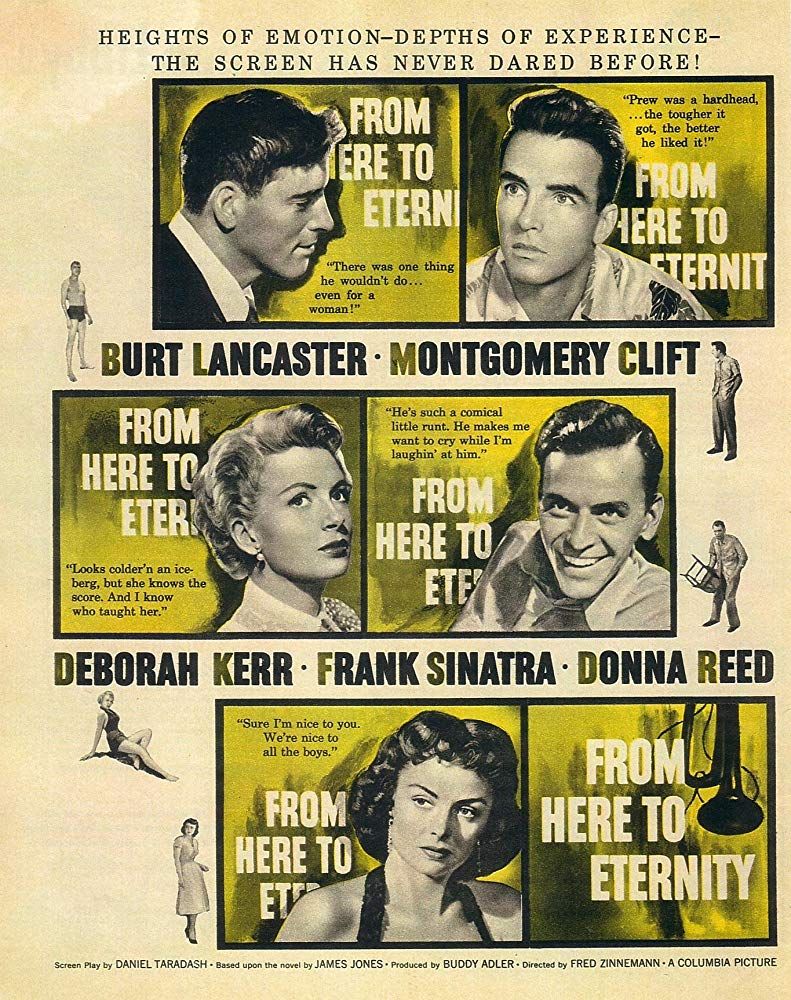 This movie was directed by Fred Zinnemann. It was produced by Buddy Adler. It was produced by Columbia Pictures. The screenplay was written by Daniel Taradash. It was based on the novel of the same name by James Jones. This film was nominated for five Academy Awards, Best Actor for Montgomery Clift, Best Actor for Burt Lancaster, Best Actress for Deborah Kerr, Best Black-and-White Costume Design, and Best Scoring of a Dramatic or Comedy Picture. It won eight Oscars, including Best Picture, Best Supporting Actor for Frank Sinatra, Best Supporting Actress for Donna Reed, Best Director for Fred Zinnemann, Best Screenplay for Daniel Taradash, Best Black-and-White Cinematography for Burnett Guffey, Best Sound Recording for John P. Livadary, and Best Film Editing for William A. Lyon. It won two Golden Globes, Best Director for Fred Zinnemann and Best Supporting Actor for Frank Sinatra.

This is a fair Code film. I am pleased to say that it was far more Code-compliant than I expected from all the reports I had read about it. I expected it to be much more suggestive of amorous immorality than it was. It certainly did not live up to the insulting title which its source book was given, From Here to Obscenity. The most surprising thing to me was the kissing scene on the beach. From the suggestive descriptions to the endless promotional shots I had seen, I expected it to be very inappropriate. I was pleasantly surprised to learn that the descriptions were exaggerated. The kiss was brief and close-mouthed, and their position was not that suggestive. Rather than fading out on the kissing, as I thought, the scene began that way and quickly progressed to a conversation. Although it probably would have been better if one of them were wearing a robe, as the PCA suggested, it was far from obscene. I was very pleasantly surprised by the way the whole illicit relationship was handled. Although there was an implication that they were having an affair, nothing aside from a few kisses was shown. This relationship was not condoned, so it was acceptable. I also appreciated the handling of Donna Reed’s character, who was originally a member of the oldest profession. I felt that her character had been effectively turned into a hostess who was payed to dance and talk with men, whom the proprietress warned to behave like gentlemen. One of the reasons that I classified this film as fair was because of the use of forbidden expressions lousy and broad. Although technically banned by the Code, these words were the only “harsh” words used in this adaption of a novel which was riddled with profanity. Also, some of the fight sequences seemed a little too prolonged and intense to me. I didn’t think that anything which was shown was too violent or grotesque. There just were a few times when men were fighting that left me and my sister cringing and almost looking away, fearful that something would be shown. In general, I am very impressed by the way this troublesome, dirty, and salacious story was turned into a Code-compliant film.

I recommend this film to my viewers. It is one of those movies which every classic film fan must see at least once, just for the experience of watching it. It isn’t a movie which I think that I will frequently re-watch, but I did enjoy it. The acting was superb. I didn’t like Burt Lancaster in the other film in which I have seen him, although I admired his performance. In this film, his acting is indisputably good, and I found him more appealing, though still a little gruff. Montgomery Clift gave an exceptional performance as the sensitive, hot-blooded, and tortured young soldier who would rather be mistreated than betray his beliefs. I was very impressed by how feeble he seemed near the end after being wounded. I couldn’t help routing for him, since he was wonderfully full of principles. Both the leading ladies seemed quite hard when we first me them. However, it was subtly revealed why each was like she was as the film progressed. Deborah Kerr’s character quickly turns into a sympathetic, misunderstood heroine whom we deeply pity. I was impressed by her American accent and surprised by how much she looked like Marilyn Monroe in this film! Donna Reed’s character also showed her depth and sensitivity as the film progressed. I was impressive to see the usually soft and sweet Donna Reed as this self-centered character. However, I was amazed by how different she became through knowing Montgomery Clift’s loving soldier. Perhaps the most amazing performance is from Frank Sinatra. If anyone deserved an Academy Award, it was he. I have never seen him in a non-musical role before. Although I enjoy his Code performances in 1940s films, I’ve felt there were weaknesses in his Shurlock Era roles, such as in High Society and Pal Joey. In the role of the rebellious, proud Italian soldier, Frank proved to me that he was a gifted actor who didn’t need to sing for success. This is a film which is very emotionally impacting. Days later, you will still find yourself humming the theme song and thinking about the most poignant moments!