Today is Sunday, so it’s time for another 52 Code Films article. Every week this year, I have watched and reviewed at least one Code film which I have never seen before. These Code films are American films made during the Breen Era of Hollywood, 1934-1954, the years during which Joseph I. Breen was the head of the Production Code Administration. When he enforced the Code, all films were decent for everyone! It is that era which is known as the Golden Era of Hollywood. Here at PEPS, we study and analyze that era and its films. To gain a deeper understanding of these wholesome films, I created this series so that I would be sure to discover many new classics. There are only three more weeks in this series after today’s article!

Today’s topic is A Christmas Carol from 1938. This weekend is the first full weekend after Thanksgiving and the first full weekend of December. In honor of this event, we decided to host a holiday blogathon this weekend, The Happy Holidays Blogathon! I knew that I had to participate in my own blogathon with a new Code film review, so I decided to write about a Code Christmas film which I haven’t seen yet. Last holiday season, I heard about the Code version of A Christmas Carol which MGM made in 1938. I thought that it sounded fascinating, but I didn’t get a chance to see it last year. As soon as we started planning this blogathon, I knew that I had the perfect reason to watch and review this movie! It can be rented or purchased on Amazon Video, so we watched it on Thursday.

A cheerful young gentleman in Victorian England goes to pay his uncle a visit on Christmas Eve. As he is making his way to his shop, he meets two sons of his uncle’s employee. The younger of them is an adorable and kindhearted cripple who must walk with a cane, and the young man immediately takes a liking to the lad. At the uncle’s counting house, the young man exchanges holiday greetings with the father of the two boys, a nervous and overworked but jovial fellow. Their celebration is interrupted when the miserly uncle arrives. He scoffs at his nephew’s joyful attitude toward Christmas, which he thinks is nothing but humbug and foolishness. After his nephew has left, the old man coldly refuses to donate any part of his wealth to two gentlemen who are collecting funds for the poor of London. After working hours, the miser’s assistant walks home. When some boys throw snowballs at him, he instructs them on the proper way to do it. Unfortunately, he demonstrates on the next man coming around the corner, who happens to be his employer. He is immediately fired. Despite this terrible luck, the man decides to buy the groceries which his wife required for Christmas, going so far as to buy a goose for their dinner! He tries to have a happy Christmas with his family despite the knowledge of having been discharged, so he hides the information from his wife and all but their oldest child. Meanwhile, his former employer is rambling around his empty, dusty mansion, preparing for bed. Suddenly, the spectral figure of his former business partner appears in his room. Wrapped in chains, the ghost says that he has come back to the earth to warn his partner not to make the same mistakes. If he continues to be a heartless miser, he too will spend the afterlife bound by the chains he formed during life. The living man at first refuses to believe that he is being visited by a spirit, but he soon finds it hard to deny. Before disappearing, the specter says that he will be visited by three spirits, the first at one o’clock, the second at two, and the third at three. Listening to them and learning from them is the miser’s only chance for reforming. Accordingly, the three spirits visit him, the Spirit of Christmas Past, the Spirit of Christmas Present, and the Spirit of Christmas Future. As he sees visions from the past, present, and future, the old man remembers his happier days, learns about the joys of Christmas, and is shown the awful future which could await him. Is it too late for him to change?

This movie was directed by Edwin L. Marin. It was produced by Joseph L. Mankiewicz. The production company was MGM. The screenplay was written by Hugo Butler, based on the iconic 1843 novel of the same name by Charles Dickens. 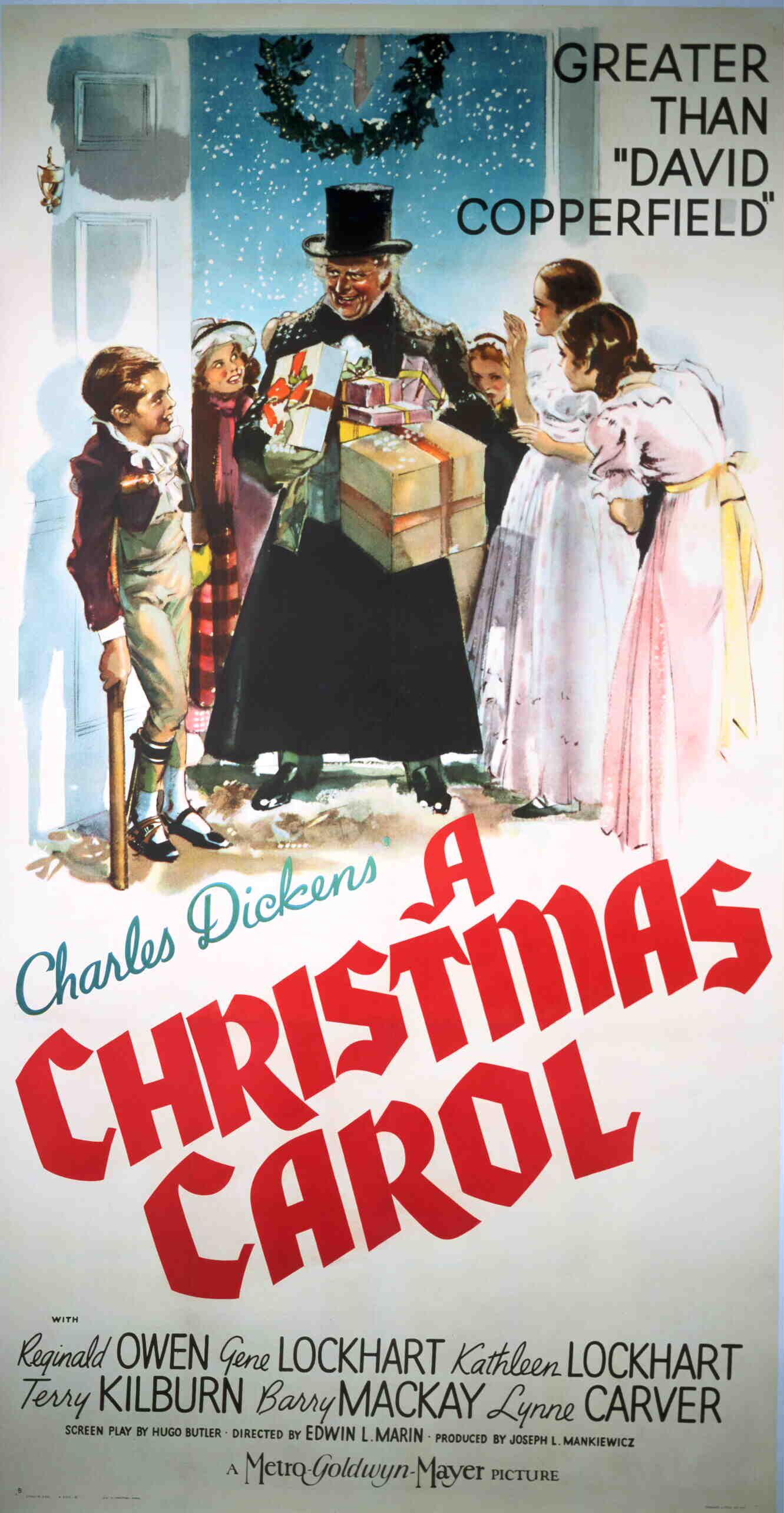 This is a good Code film. It is entirely decent, wholesome, and clean. It doesn’t contain any objectionable qualities. The scenes with Marley’s ghost and the Spirit of Christmas Future are a little creepy, but they aren’t scary enough to really upset anyone. Unlike some adaptions of this story, this film is not too dark or sinister for young children. Furthermore, some even more heartwarming aspects were added. This film shows the importance of generosity, kindness, and love. With nothing offensive, it is just an enjoyable and inspiring movie.

This is an excellent movie. I thoroughly enjoyed it. This is actually the first serious film adaption which I have seen of Dickens’s famous story. I have previously just watched the Mickey Mouse and Barbie takes on it. I really enjoyed this film. I liked it even more than I thought I would. The story is not always as compelling as it could be, I think. This version didn’t miss. The acting was excellent. Reginald Owen was extremely convincing as the mean old miser Scrooge. He looked very realistically old. Gene Lockhart was charming as Bob Cratchit. Interestingly, his wife in the film is really played by his own wife, Kathleen Lockhart. One of their daughters is played by their real-life daughter, June Lockhart, in her screen debut. Tiny Tim is lovably played by adorable child actor Terry Kilburn. Many of the younger actors, including Terry, are recognizable from MGM’s Andy Hardy series, which was being made at the same time. Among them is Ann Rutherford, Andy’s girlfriend Polly Benedict, who plays a angelic blonde Spirit of Christmas Past. The rest of the cast is excellent, too. An added touch of charm and interest is the unusual score by Franz Waxman, who more frequently wrote music for Warner Bros. than MGM. 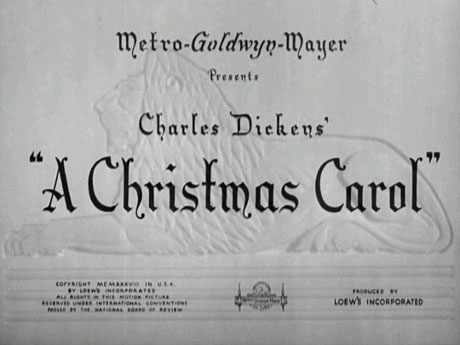 I highly recommend this film to my viewers. It is just a charming movie. It is truly heartwarming and very inspiring. I have never been particularly moved by any version of A Christmas Carol before, including the film adaptions I mentioned as well as a community play I saw years ago. Because of the excellent acting, tender script, old-fashioned cinematography, lovely historical details, and magical special effects, I loved this film. I found it very moving and enjoyable. I know that you will, too!

Aside from perhaps The Nutcracker, no Christmas story is more iconic than A Christmas Carol. Whether you enjoy reading the original Dickens story, watching movie or TV adaptions, or attending a local play of the story, this story is a timeless holiday tale. Even those who aren’t very familiar with one particular version of the story know that they don’t want to encounter a Scrooge and his “Bah Humbug!” attitude. If you want to see this Dickens classic in a whole new way, why not watch this wonderful classic film?

As old movie fans, it grows harder and harder to find new classic Christmas movies to watch. Although I am sure there are still hundreds of Code films with at least one or two Christmas scenes in them which we haven’t encountered yet, we have seen most of the popular old Christmas movies. I was delighted to realize that there was a holiday film as iconic as this that we hadn’t seen yet! If you haven’t seen this movie yet, there was never a better time to see it! I suggest that you watch it this holiday season.

Merry Christmas, and “God bless us, everyone!”