Today is Sunday, so it’s time for another 52 Code Films article! Today’s feature is the forty-fifth in the series. I have seem a lot of wonderful Code movies during this year so far, and there are still seven weeks left in the series for this year! In late December, I will announce my plans for the continuation of this series in 2020. This series has increased my knowledge of the Golden Era of Hollywood so much. I have explored the work of familiar actors as well as new ones. I have seen many different film genres. I have seen famous classics as well as obscure movies. I have seen many good Code films, lots of perfect Code films, a few fair, and and even a couple of poor Code films. Through it all, though, I have confirmed my belief that the general standard during the American Breen Era (1934-1954) was one of decency in films. The high percentage of my randomly selected new movies which have turned out to be good or perfect Code films indicates to me that these movies represent the largest classification. In all, the Production Code Administration did a good job of making most movies “reasonably acceptable to reasonable people.”

Today’s topic is Key Largo from 1948. This is one of the most iconic and famous films from the Code Era. It has been recommended to me as a great film noir and a wonderful example of the brilliant partnership of Humphrey Bogart and Lauren Bacall. Although I have seen hundreds of Code films, there are still some very famous movies which I haven’t seen yet. This film is one of them. This movie was assigned to me as the topic of an upcoming newspaper article which I have been commissioned to write. Thus, I knew that I finally needed to see it! I knew that that would be a pleasure, since watching a wonderful new Code film is always enjoyable research. I decided to make this movie my new Code film for this week. We bought this movie on Prime Video and watched it this afternoon. With its veteran leading man, it is very appropriate for this weekend, since tomorrow is Veterans Day.

A World War II veteran visits Key Largo, one of the remotest parts of the Florida Keys, during the off-season, the sweltering summer. He goes to a hotel which is closed for the summer to visit the father and wife of one of his best friends, who fought with him and died during the war in Italy. The kind old man and the beautiful young widow are very glad to meet the major about whom they heard so much from their deceased loved one. They invite him to stay for awhile. However, things are very strange at the hotel. A week ago, the whole hotel was rented out by a strange party of five men and a woman. The men are mysterious and bossy, the woman is a drunk, and the leader of the group never comes out of his room except at night. The daughter-in-law tells their guest that the group offered so much money that they couldn’t refuse. Meanwhile, the law is looking for two Seminole brothers who escaped from prison. The hotel keeper is a friend to all the Indians in the area, and he predicts that the brothers are good young men who just got restless after being sentenced for a minor offense and predicts that they will turn themselves in before the day is over. Sure enough, they arrive at the hotel, and they follow their friend’s advice to wait for the law enforcer to return and apprehend them. At the same time, there is a storm warning, since a hurricane is approaching. The strange guests begin acting even stranger than usual. Everyone realizes that something is wrong when one of the thugs insists on answering the telephone and tells the police that the hotel owner and his daughter-in-law aren’t there. The men pull out guns and bring everyone upstairs as hostages. There, they meet the leader of the group. They realize that he is an infamous gangster who was deported from the United States several years ago. He is now attempting to regain his power as a leader of underworld activities. He is hiding out at the hotel while he transacts a deal with an old criminal pal of his. Despite the impending hurricane, he is planning on receiving his friend that night. His fourth hostage is the young deputy who was looking for the Indian brothers. The old man is repulsed by the murderous manipulator. His daughter-in-law is fiery as she fends off the gangster’s unwanted advances. The brave deputy would give his very life to defeat the public enemy. In the midst of this, the soldier’s position is uncertain. At first, he seems to be entirely on the side of his friends. Then, he seems to be flattering the gangster for tactical purposes. Eventually, his reluctance to try to kill the racketeer make the others wonder if he really believes the cynical opinions he boldly stated. Trapped by a cold-blooded killer and waiting for an impending hurricane, will the trio survive the dangerous night on Key Largo? 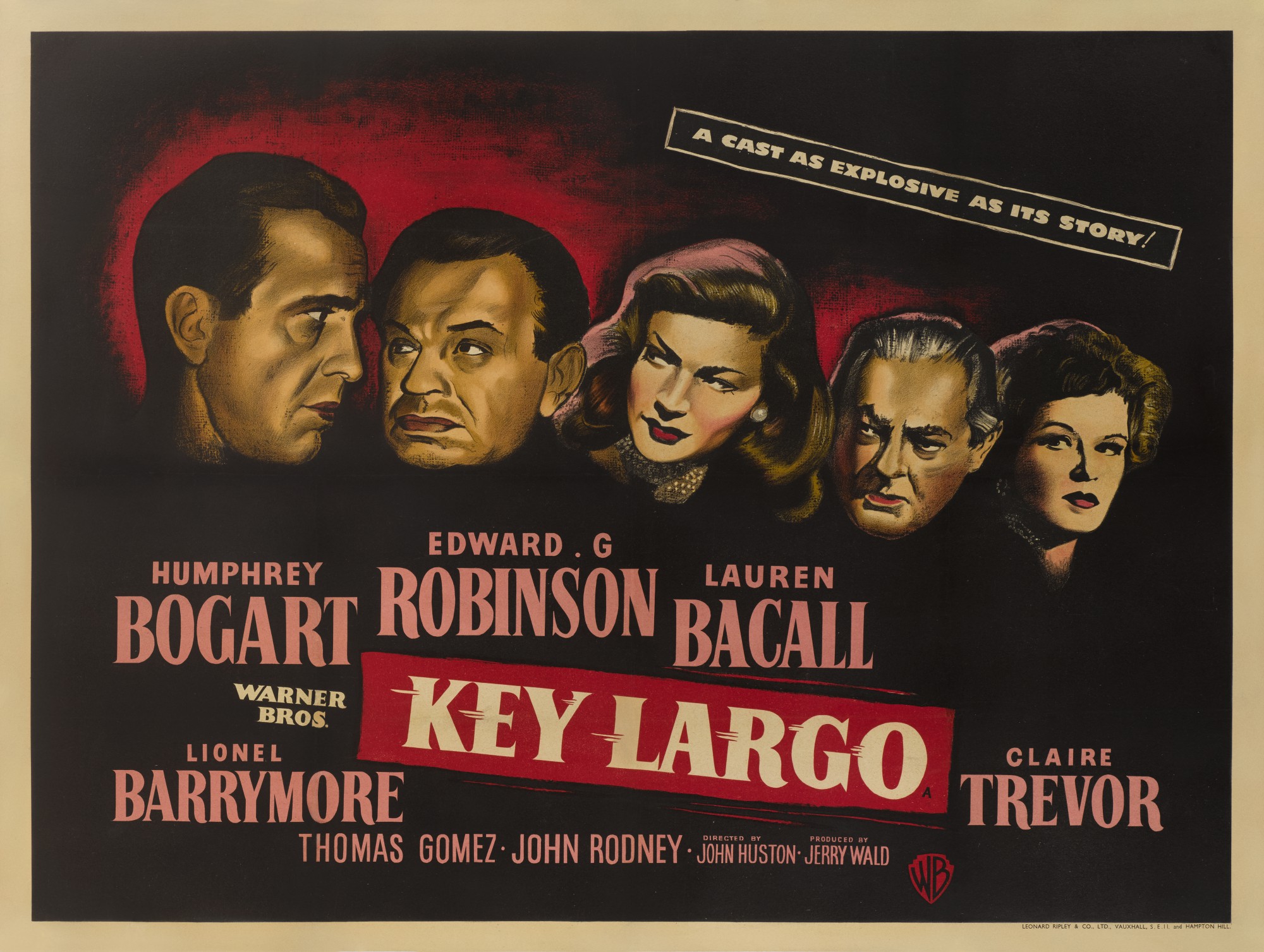 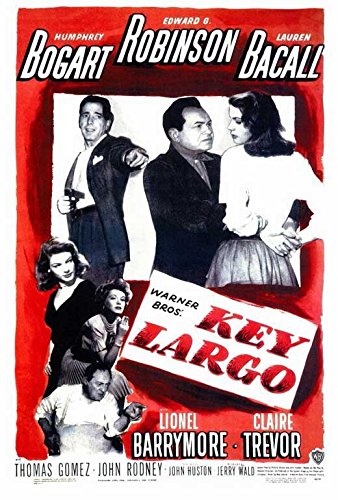 This is a perfect Code film. Like another Warner Bros. masterpiece with Humphrey Bogart, Casablanca, it is a great example of Code entertainment at its best. This is a dramatic, exciting movie which is acceptable for all audiences. Serious, mature topics are handled with delicacy and tact. Although there are multiple shootings and killings in this film, there is no excessive violence. It is not gory or graphic. The situation of a gangster’s moll, Gaye Dawn, is presented with discretion, yet it is very clear. The alcoholic singer is shown as a pathetic but pitiable character. Her story of success in the spotlight and drunken decline are a cautionary tale. Although it is implied that she cheapened herself by being with this ruthless man, no details about their illicit relationship are offered. Also, although we understand that one of the thugs hits her, she is not shown being struck onscreen. In addition, Rocco’s propositions to Nora are never heard. He whispers to her many times, so we never hear the probably inappropriate comments which he makes to her. This film is also very inspiring. It is filled with patriotism. It teaches the importance of fighting for justice in this world. It contained a powerful message for post-war America. The fight did not end with the victories in Europe and Japan. Rather, it just began then. The fight continues every day to defeat evildoers like Johnny Rocco. Also, it continues as men like Frank McCloud struggle to find their place in the world. Although a tentative fighter at first, Frank ultimately is a powerful example of a hero who fights for what he knows to be right in his heart, even if it doesn’t agree with his head.

This is a wonderful movie. I really loved it. I can’t believe that it was only an hour and forty minutes! Like Casablanca, it contains so much action, dialogue, and suspense, yet it is under two hours long. The acting is brilliant. This is the first movie with Humphrey Bogart and Lauren Bacall which I have ever seen, and I love their duo! I am really discovering the talent of both of these actors. Counting this film, I have seen four movies with Mr. Bogart and two with Miss Bacall. This was the last film to pair this famous married duo. Their interaction is truly magnetic. The development of their relationship is very subtle. They neither kiss nor embrace, yet the way they look at each other is more tender than many love scenes. I really appreciated Lauren Bacall’s performance in this film. While she was harsh and cruel in Young Man with a Horn, she was very soft and sweet in this movie. Meanwhile, Humphrey Bogart was masterful and rather mysterious in his role. He kept the audience guessing, yet I couldn’t help believing in him the whole time. Lionel Barrymore was sometimes tender and sometimes fiery yet always magnificent as Mr. Temple. His emotions were as real as the fact that he couldn’t walk as he raised himself out of his wheelchair to go after Rocco. Edward G. Robinson was thoroughly convincing and despicable as Rocco. This is the first Code gangster role which I have seen played by this famous Warner gangster actor. His character was laden with references to multiple gangsters and earlier films. Even his name had meaning. Rocco was the name of the gangster rival in the first Warner gangster film, Doorway to Hell from 1930, and it also sounds similar to the name of Mr. Robinson’s famous role in Little Caesar from 1931, Rico. I was very impressed by how his cocky and menacing character slowly revealed his weaknesses, such as cowardice and a complete reliance on shooting to solve his problems. The actors cast as his thugs were very convincing in their respective roles. Another very memorable performance was Claire Trevor’s role as the aging moll. She brought a lot of heart and humanity to a role which can be very shallow. She showed us how her character had changed because of her relationship with Rocco. She also did a very convincing job of acting drunk. Her a cappella performance of “Moanin’ Low” was so real and heartbreaking, perhaps because the actress was really uncomfortable with singing. The final touch was Max Steiner’s score, which provided a beautiful backdrop to the story. 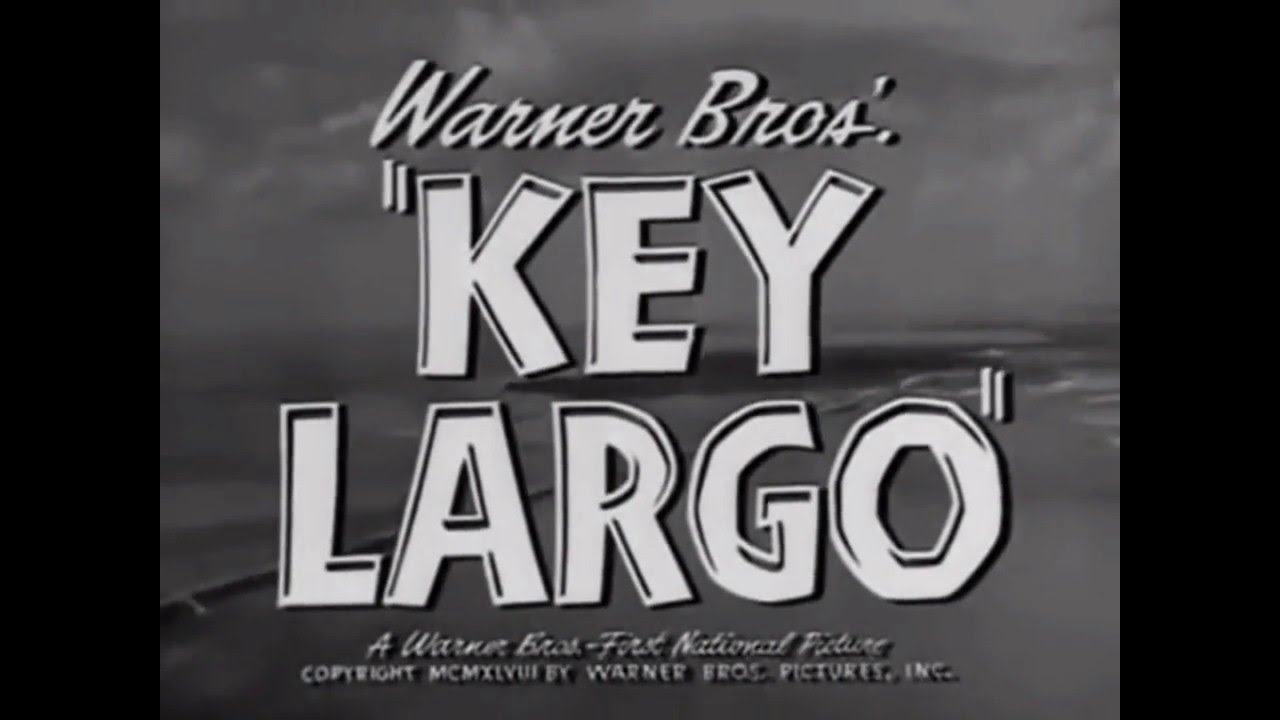 I highly recommend this movie not just to classic film fans but to everyone who enjoys movies. It has such a riveting pace that it is exciting and enjoyable for every moment. I think that even those who haven’t seen a lot of old movies would be riveted by this film. It has so many different facets that it could surely capture anyone’s interest. I think that some very popular films are overrated, but this one is truly classic for a reason. I can’t say enough good things about it. You simply have to see it for yourself!

This week, I watched one extra new Code film, Two Girls and a Sailor from 1944, which I will review some other time.