Today is Sunday, so it’s time for another 52 Code Films article. Every week, I choose a movie which I have never seen before, and I watch it. It can be any movie, as long as it is an American film made between 1934 and 1954. We call this period the American Breen Era. It is during this time period that Code films were made, since Joseph Breen of the Production Code Administration ensured that all movies complied with the Code’s standards of decency for all audiences. At the end of each week, I review that film following a basic structure, and I conclude by telling my readers whether or not I recommend the movie. I am nearing the end of this year of the series, and so far I have only not recommended one film! I guess that means that most Code films are enjoyable to me. Let’s see if that record changes with today’s film.

Today’s topic is Cover Girl from 1944. This film is from an appropriate year, since this week is my forty-fourth entry in the series. On Wednesday night, I decided to watch my new movie for the week. Many weeks, my topic decided some time in advance because I sign up for a blogathon that weekend. Thus, my topics are films which can also be entries in blogathons. However, this week, I didn’t have a pre-arranged topic. Thus, I looked in our VHS collection for a movie which I hadn’t seen before. I found several Code films which looked very interesting. Out of them, I chose Cover Girl, since I was surprised that I hadn’t seen this Gene Kelly musical. Also, this movie is quite different than the movies I have reviewed the last few weeks. 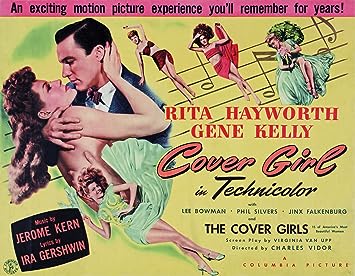 A beautiful young dancer is in love with a young choreographer who owns a nightclub in Brooklyn. The young lady is happy dancing and dreaming of success with the man she loves and their comedian friend who also works at the club. However, one night, one of the chorus girls says that she is going to a cover girl interview the next day. Her talk about the possibilities of fame and fortune interest the other young lady, so she decides to go, too. When the obnoxious blonde is interviewed by the publisher’s weary assistant, she learns that a relaxed and demure newcomer is desired for this cover, since she is supposed to be a bride. Realizing that she failed the interview herself, she sabotages her redheaded friend by telling her they want someone really peppy and energetic. Thus, the other girl acts over the top and blows the interview herself. She returns to the Brooklyn night club. Meanwhile, the publisher is desperate for a fresh face for his cover girl. His assistant shows him the blonde’s picture as the only possibility she found, so they decide to go to the Brooklyn nightclub to see her. Once there, his eyes quickly gravitate toward the beautiful redhead. He tells his assistant that she is the one. Back at his house, he explains that he sees more in her than just a pretty face and a lovely figure. She brings him back to his youth. Forty years ago, he fell in love with a beautiful performer who looked exactly like her. Despite the fact that she had a pianist beau, he courted her and wanted to marry her. He tells his assistant to send for her to come to his office the next day. Despite her beau’s misgivings, she keeps the appointment. The middle-aged but still dashing publisher learns that his former sweetheart was this young lady’s grandmother, and she gets the job as the cover girl. At first, she thinks there aren’t any results, but success soon knocks at her door. She is overwhelmed by reporters, and the nightclub is overwhelmed by customers who come to see the famous cover girl! The establishment gets a whole new image, but it puts a strain on the starlet’s relationship with the owner. Meanwhile, an important young Broadway producer who is a good friend of the publisher wants her to star in his new musical. He also is interested in her romantically. Her sweetheart begins to wonder if he could help her the most by letting her take these great opportunities. He picks a fight with her so that she will quit and join the show. Will she find happiness in fame and fortune, or will she follow her grandmother’s example and choose true love over material comforts? 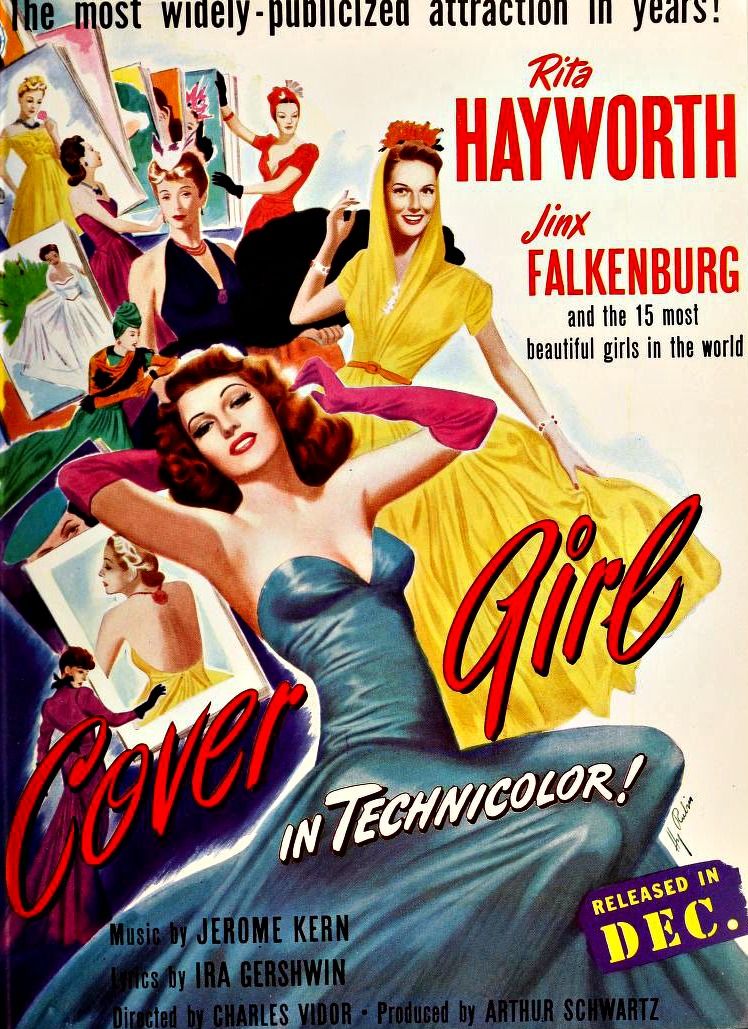 The dancer turned cover girl is Rusty Parker, played by Rita Hayworth. Her beloved choreographer is Danny McGuire, played by Gene Kelly. Their comical friend at the Brooklyn night club is Genius, played by Phil Silvers. The magazine owner who was in love with Rusty’s grandmother is John Coudair, played by Otto Kruger. The younger version of John Coudair whom we see in the flashback is played by Jess Barker. Mr. Coudair’s assistant at the magazine is Cornelia Jackson, played by Eve Arden. The influential theater owner who is interested in Rusty is Noel Wheaton, played by Lee Bowman. The disgruntled chorus girl who also wants to be a cover girl is Maurine Martin, played by Leslie Brooks. 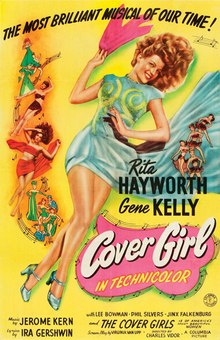 This movie was directed by Charles Vidor. It was produced by Arthur Schwartz. The production company was Columbia Pictures. The screenplay was written by Virginia Van Upp. The story was written by Erwin Gelsey, and the adaption was by Marion Parsonnet and Paul Gangelin. The new songs were written by George Gershwin with lyrics by Ira Gershwin. This movie was nominated for Academy Awards for Best Color Cinematography for Rudolph Mate and Allen M. Davey, Best Color Art Direction – Interior Decoration for Lionel Banks, Cary Odell, and Fay Babcock, Best Sound Recording for John P. Livadary, and Best Original Song for “Long Ago and Far Away” for the Gershwin brothers. It won an Academy Award for Best Scoring of a Musical Picture for Carmen Dragon and Morris Stoloff.

This is a fair Code film. Story-wise, it is Code-compliant. Essentially, it is very decent and wholesome. My only objection is to the costumes. In the film’s opening number, the chorus girls take off the outer parts of their clothing, leaving them in tan-colored costumes which are decorated with gold sequins. Nothing is really showing, but it is rather suggestive. There are numerous other costumes with skirts which are a little too short or other slightly indecent styles. Also, Phil Silvers performs a number about rationing on material. He sings about not minding the short skirts and scanty clothing which is resulting from the shortages. Some of the lyrics are a little questionable, although nothing is showing except the chorus girls’ legs. Other than that, this is a very wholesome and acceptable film.

I think this is an excellent movie. There are some wonderful musical numbers in it. Gene Kelly is sensational. This was the first movie which gave him the opportunity to choreograph, and he proved how talented he was. His innovations are entertaining and clever. I especially enjoyed the number in which he dances with himself as a transparent alter ego. His dancing is amazing, and the special effect is very impressive. Rita Hayworth dances with him and by herself very well. Phil Silvers also does an impressive job of keeping up with them in the number where the trio dances down the street. The songs are beautiful, especially the famous “Long Ago and Far Away.” I enjoyed the flashback sequences. I thought that the look-alike relative angle was very interesting. The numbers which Rita Hayworth performed as the grandmother were some of my favorites. I thought that the story was fascinating and the acting was excellent. My only criticism of the plot was the love triangle. When the middle-aged publisher talked about reliving his youth with the young lady who looked like the girl he loved years ago, I immediately thought that there would be a love triangle. He thought that Rusty was too good to be poor and work in Brooklyn. He said that he wanted her to have the best things in life, so I naturally thought he wanted to give them to her. Then, all of a sudden, this young friend of his appears, and he is offered as the third party in the triangle. This seemed extremely unnatural. I didn’t think that the Wheaton character was necessary at all. Naturally, I didn’t want to see Rusty end up with anyone except Danny. However, I would have preferred to see Mr. Coudair as the other man. Although he was a lot older than she, he was still very handsome and suave. The concept of the wealthy older man is an established one in films, especially during the Golden Era. Why wasn’t John Coudair good enough to be Rusty’s other love interest? I found Wheaton to be very irritating. Perhaps that was the intention. I tried to do some research on the story’s origins, but I couldn’t find out anything. I still have the lingering suspicion that Mr. Coudair was originally intended to be the wealthy man she planned to marry.

I highly recommend this film. If you are a fan of classic musicals and, like me as of last week, haven’t seen this movie yet, you must watch it soon! I know that you will love it, as I did. It has so much great music and dancing in it. It is very interesting to such an important step in the development of Gene Kelly as a famous choreographer as well as actor and dancer. I also enjoyed seeing another famous film which Rita Hayworth made. I have seen relatively few of her films, so I am glad to add more of her movies to my list of watched films. The real cover girls which are featured in the grand Broadway musical sequence are very interesting to see. The most interesting thing is to note how much the magazines on which they are featured, like Vogue and Cosmopolitan, have declined in seventy-five years! The scripting is great. In conclusion, this is another one of the thousand of masterpieces which were made during the Breen Era, Hollywood’s Golden Age. I probably can never see them all, but I can try!