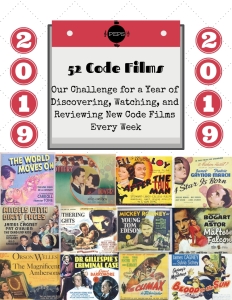 Today is Sunday, so it’s time for another 52 Code Films article. Every week this year, I have agreed to watch at least one new movie from the American Breen Era (1934-1954). The purpose of this series is to expand my knowledge of Code films, since one can never exhaust the huge collection of movies made during this time which are available. So far, I have enjoyed this process for thirty-six weeks. Now, I am proceeding to my thirty-seventh week. 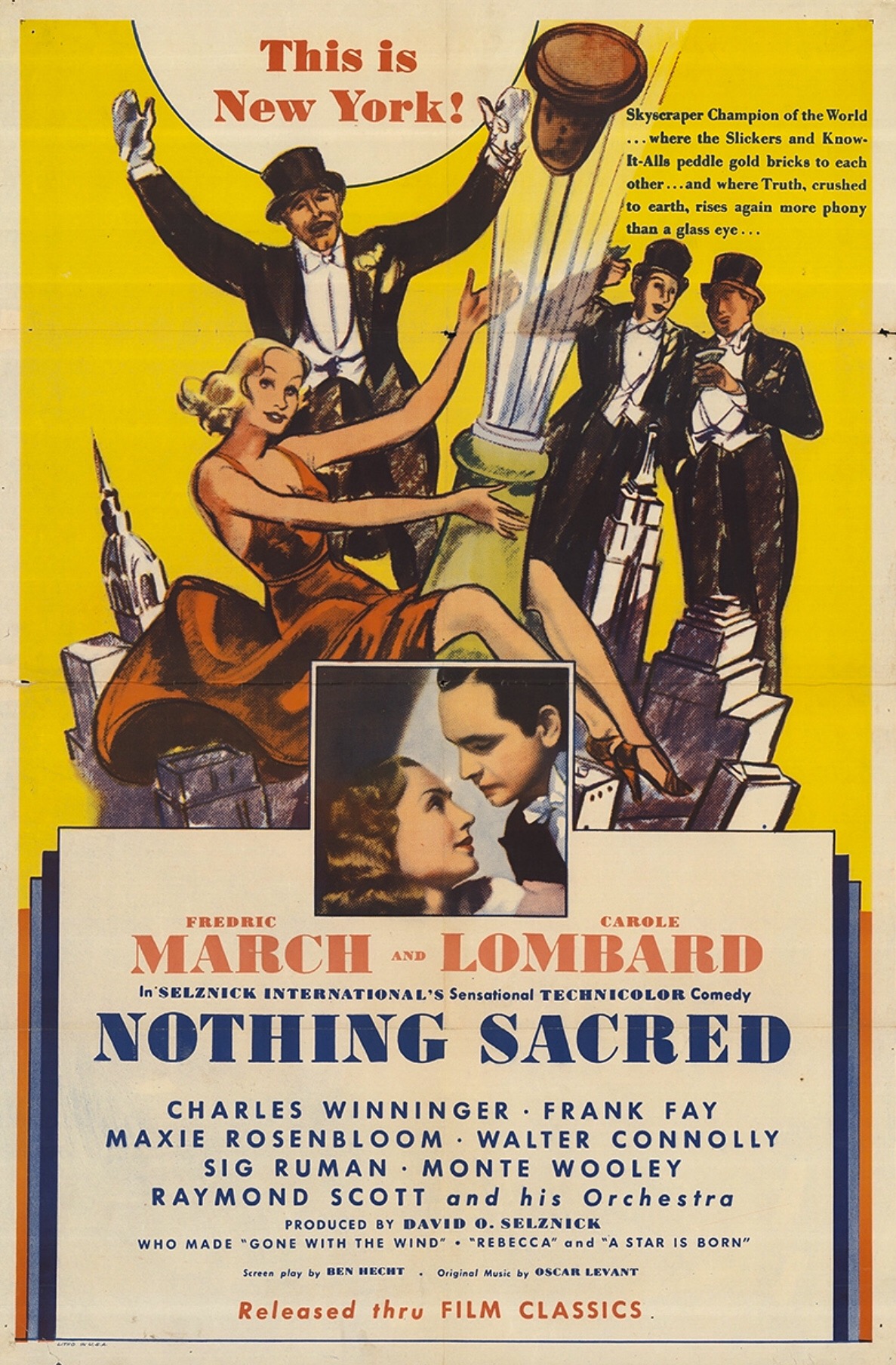 Today’s topic is Nothing Sacred from 1937. We have had this movie on a VHS in our collection for years, but I had never watched it. The cast and plot sounded interesting to me, so, since I didn’t have any commitments for this week’s topic, I decided to make this film my new Code film for this week. I watched this film on Wednesday. Coincidentally, my thirty-seventh film was released in 1937!

When a big story of his is found to be a hoax, a New York newspaperman is assigned to his paper’s obituary department. After suffering indignity and ill-treatment at a desk in the middle of a corridor for weeks, he decides he’s had enough. He tells his editor that he deserves another chance, and he has a great idea for a story. In Vermont, a young lady is dying of radium poisoning. Wouldn’t it be a great story for the paper to bring her to New York for honors, attention, and glorious fun during her last days? The editor agrees, so the young reporter goes to Vermont to get the girl. When trying to locate the sick woman, he encounters many unfriendly and prejudiced townspeople, including a doctor who hates all newspapers, especially his, because he didn’t win a writing contest twenty-two years ago! While the undaunted newspaperman waits outside, the young victim visits the doctor, who is her physician and friend. He tells her that he misdiagnosed her radium poisoning and that she isn’t going to die, but the news doesn’t bring her much joy, since she is far from happy at the prospect of spending the rest of her life in this hick town. After she leaves the doctor’s house, the newspaperman confronts her, tells her his idea, and asks her to come to New York. Unable to resist the temptation of taking the trip of a lifetime, even under false pretenses, she agrees. At first, her doctor friend is reluctant to be part of the farce, but he eventually agrees to go with her and keep the reality of her non-existent condition a secret. In New York City, the Big Apple rolls out the red carpet for the brave, dying heroine, not knowing that she is deceiving them all. Meanwhile, the newspaperman begins to think that all the over-the-top sentiment is pretty phony. He thinks that the lovely and courageous young lady makes the whole city looks ridiculous. He finds himself falling for her, even though her days are numbered. The faker finds herself developing feelings for him, too. She feels horrible for deceiving him and wonders what will happen when he finds out she isn’t going to die. She may not have long to wait. A famous doctor from Vienna is arriving in New York, and he is an expert on radium poisoning. While her sweetheart sees it as a slim chance of saving her, she knows that the specialist will only discover the truth about her condition. It looks like there may be nothing for her to do but to jump in the river! 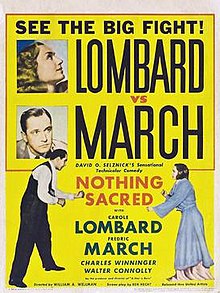 The small-town girl who pretends to be dying of radium poisoning is Hazel Flagg, played by Carole Lombard. The newspaperman who brings her to New York for some fun before she dies is Wally Cook, played by Fredric March. The doctor who goes to New York with Hazel from her hometown is Dr. Enoch Downer, played by Charles Winninger. Wally’s newspaper publisher is Oliver Stone, played by Walter Connolly. The Viennese specialist who wants to examine Hazel is Dr. Emil Eggelhoffer, played by Sig Ruman.

This film was directed by William A. Wellman. It was produced by David O. Selznick. The screenplay was written by Ben Hecht. It was suggested by a story by James Street. The screenplay was also written by uncredited, contributing writers David O. Selznick, Robert Carson, Moss Hart, Sidney Howard, George S. Kaufman, Ring Lardner Jr., George Oppenheimer, Budd Schulberg, and William A. Wellman.

This is a good Code film. It is decent and wholesome. There is a lot of silly, fun-loving humor in it,  but it is all clean. This film includes a lot of witty satire, but it is all treated in an acceptable, Code-compliant way. It is easy to notice Code violations more than the avoidance of them, but one should always try to be mindful when watching Code films. It is important to notice the little things that aren’t shown and to appreciate that the Production Code Administration kept them from being shown. For instance, after Hazel has too much champagne at a nightclub, Dr. Downer helps her get ready for bed. The situation is not suggestive at all. As she lies on the bed, singing, talking, and carrying on, he takes off her shoes for her. Then, he pulls up her long evening skirt a little and takes off her stockings, one at a time. The interesting thing here is that she is wearing her garters below her knees. As many pre-Code films will show you, most 1930s ladies wore their garters at the thigh. However, it would have been indecent to show that much of her leg. Thus, the garters were placed below the knee. Because of this, the doctor could quickly lift the skirt and then pull it down again, so we barely see her knee. This was obviously a wise choice to avoid indecency. It is attention to little details like that which kept the standard so high during the Breen Era. 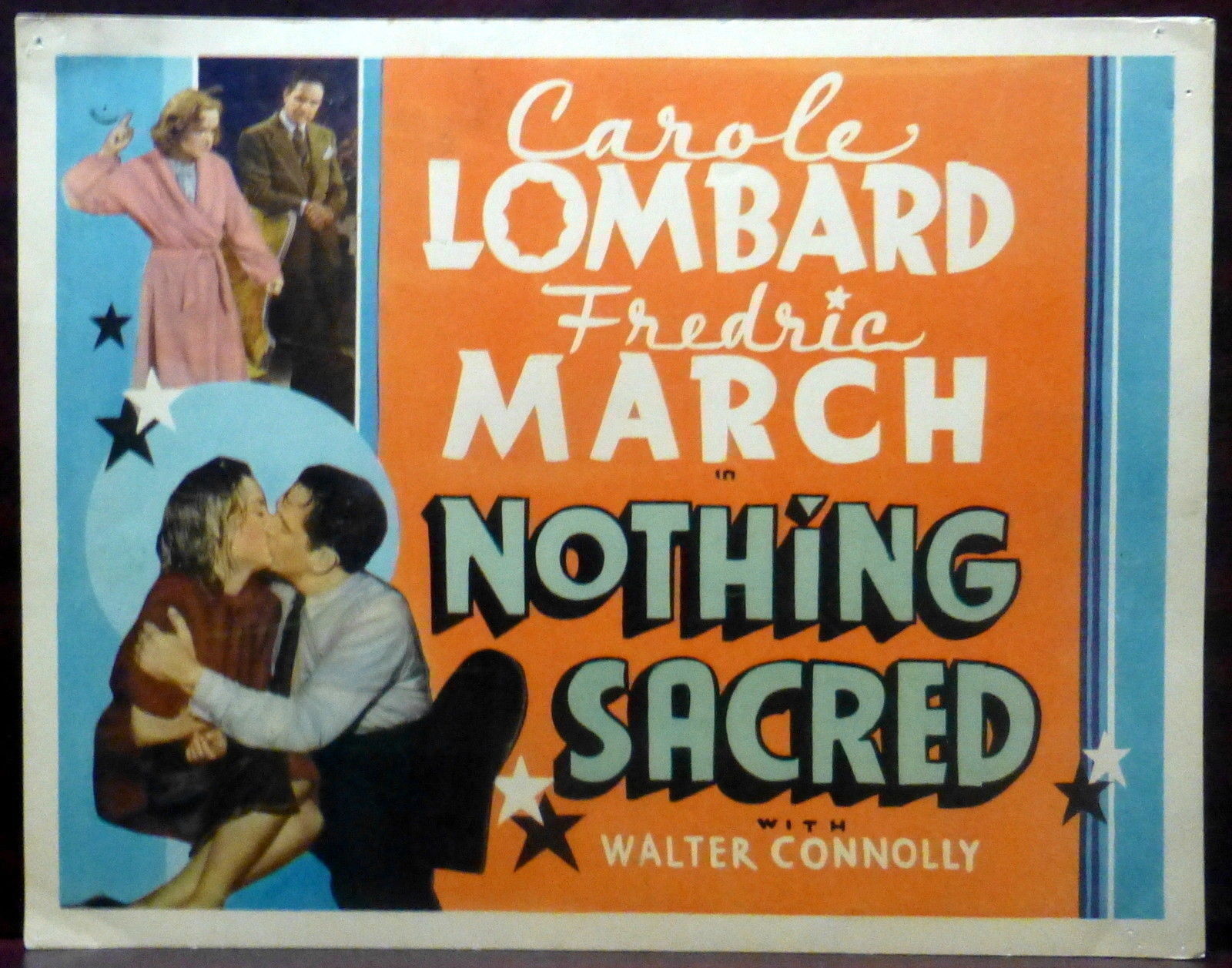 I think that this is a very funny movie. I am expanding my knowledge of movies with Carole Lombard, and I am enjoying learning more about her career and her talent. I can tell that she was called The Queen of Screwball Comedy for a reason. She is very good in comedies like this and My Man Godfrey. She had a real talent for being very funny and a little ditsy without losing her dignity and refinement. Fredric March is very good in his role as the newspaperman who develops a deeper sense of what matters in life when he associates with Hazel Flagg. He has some very funny moments, and he and Carol Lombard interact very nicely in some scenes. I don’t think this movie gave Mr. March a chance to display his full talents. The other young role of his which I have seen is the alcoholic actor in A Star is Born, the movie he made right before this one. I was extremely impressed by his performance in that film. This role just didn’t have the emotional depth, scripting, or screenplay to be as well-developed. However, this is still an entertaining movie. It is in a different class. Whereas the other one is an emotional drama, this is a zany comedy. The rest of the cast is very humorous, as well. I especially enjoyed the comical performances of Walter Connolly and Charles Winninger. 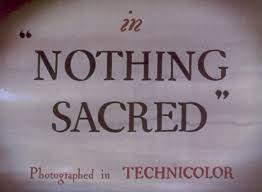 I recommend this film to my readers. If you are in the mood for a screwball comedy, this is a good one. It is under an hour and twenty minutes, but it packs a lot of laughs into its short running time. The depiction of the small town which is so snobby toward outsiders is hilariously over-the-top. Even an unnamed little boy runs out of his yard just to bite the outsider on the leg! I thought that the Technicolor was very impressive. I enjoy seeing early Technicolor films. If you are a classic film fan and are looking for a good laugh, I recommend this movie to you. It may be “nothing sacred,” but it’s a great opportunity to see Carole Lombard in a boxing match!