Today is Sunday, so it’s time for another review of a new Code film. In the first week of January, I began a new weekly series here at PEPS, 52 Code Films. In this series, I watch at least one American Breen Era (1934-1954) film which I have never seen before every week and write an article about it on the weekend. In these articles, I try to give a good analysis of each film so that my readers can decide if they want to see it. I outline the plot, just giving an overview without telling the whole story. Then, I list the actors who are in the cast and tell which roles they play. Next, I list the production crew and the studio, as well as any awards the film won. Then, I get to the analysis part of the article. I explain the film’s Code classification, based on the system for classifying Breen Era films which I described in this article. Next, I give my opinion of the film and say whether or not I recommend it. I hope that this series has been interesting and informative to you. 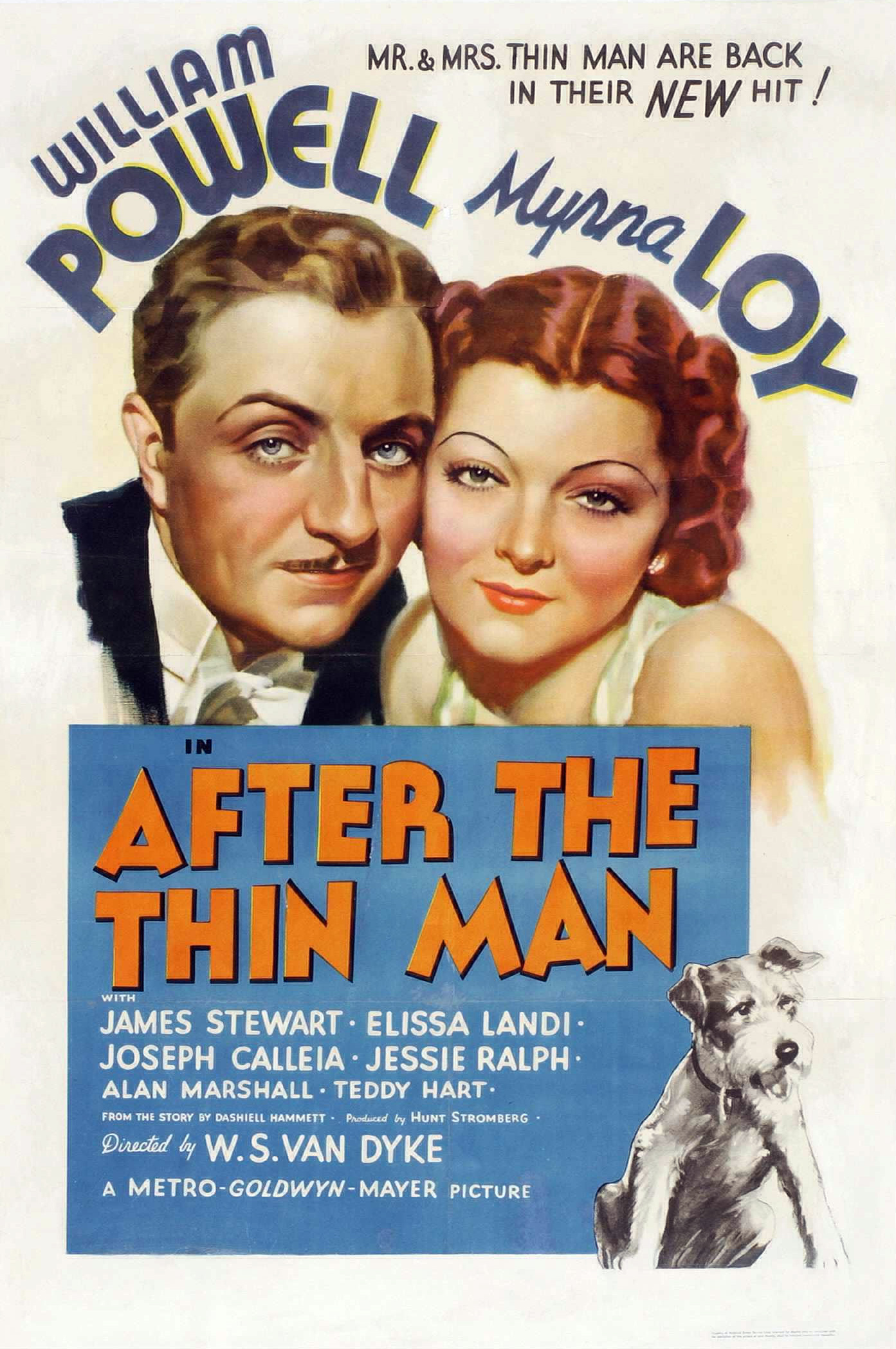 Today’s topic is After the Thin Man from 1936. A few weeks ago, we purchased a DVD collection of the first four films in the Thin Man series at Barnes and Nobles. I had heard a lot about this famous detective series starring the iconic couple William Powell and Myrna Loy for a long time but had yet to see any of them. I have been eager to see these films for myself for a long time. Last week, as part of #AMonthWithoutTheCode65, we watched The Thin Man from 1934, the first film in the series, which is a late pre-Code film. I found it to be less than magnificent, in my opinion, but I will have to review that film in a separate article. I wanted to watch the first Thin Man film so that I could watch the Code sequel as one of my new Code films. On Monday, I watched the second film in the series, After the Thin Man. I had high hopes that the first Code Thin Man movie would be significantly more entertaining than the first film, and I wasn’t disappointed!

A suave private detective and his wife return from New York to their San Francisco home after receiving great notoriety because of solving the “Thin Man” case. The gentleman retired from being a detective when he married a society woman, but his wife urges him to pursue future cases. He may find his next case in his own family, since the return to San Francisco leads to their re-involvement with his wife’s high society relatives. They arrive in town on New Year’s Eve, and they are invited to dinner at her domineering aunt’s house. Although the fun-loving husband is reluctant to visit his in-laws, who snobbishly think he isn’t good enough for his wife, his bride convinces him to go because she is concerned about her nervous cousin. The young woman is domineered by her overbearing mother, who will do anything to avoid a scandal in the family. Now, her troublesome husband has been missing for three days, and her mother won’t let her contact the police. Everyone urges the unpopular new relative to investigate the situation, and he reluctantly agrees. After leaving the mansion, the newlyweds go to a Chinese nightclub, the Lychee, where they suspect that the missing husband may be. Once there, the detective sees the shifty proprietor, whom he knows, and his Asian business partner, whose brother he sent to jail. The cousin’s husband is indeed there, but he is drunk and unfriendly. He is only interested in the flirtatious performer. Little does he know that she and the shifty proprietor are planning on stealing thousands of dollars from him. Her tense brother is also lurking, and he doesn’t like the way things are going with her job. Meanwhile, the young man to whom the cousin was engaged before she met her current husband wants her to be free of her unhappy marriage so she can marry him. He plans to pay her husband $25,000 that night so that he will go away forever. The husband plans to run away with the nightclub entertainer on that money. After receiving the payment, the husband goes home to get some clothes and take some of his wife’s jewels. She wakes up, and he tells her that he is leaving forever. She grabs a handgun and follows him out. As she pursues him down the street, he drops dead of a gunshot wound. Who shot him? The police are on the case, but it is up to the retired detective and his wife to unravel the complicated mystery and discover who wanted to get rid of the unlikable man enough to resort to murder. 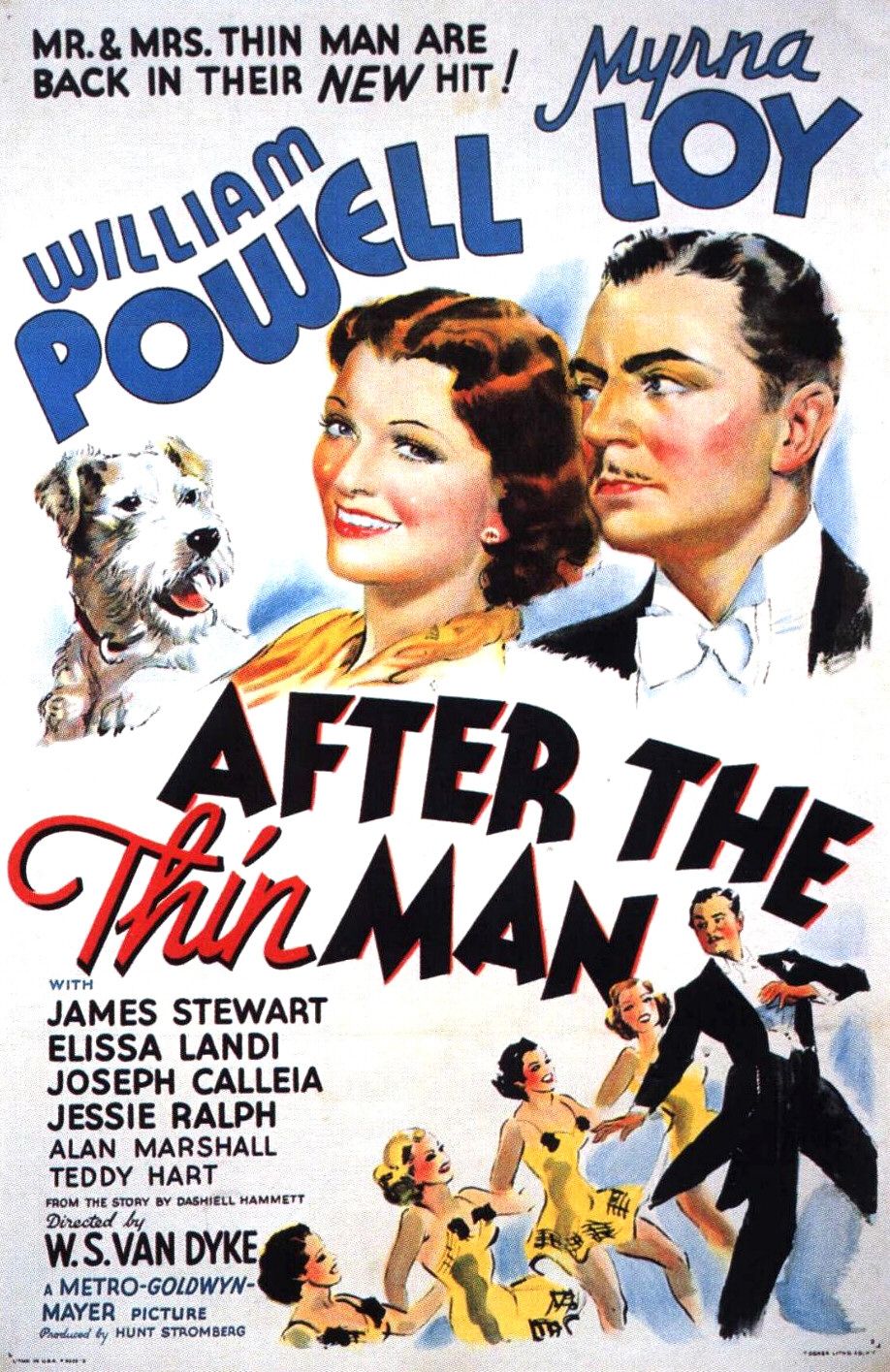 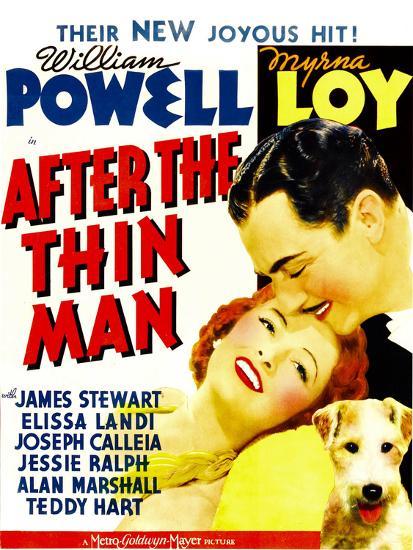 This is a fair Code film. In general, I found it to be very wholesome. It is vastly superior to the first Thin Man film. It was made only two years later, but it is a world apart. Whereas this is a well-formulated and very sophisticated film, The Thin Man relied heavily on cheap and vulgar jokes relating to Section II and fire hydrant humor with the couple’s dog. Also, there was unacceptable content in regard to the missing “thin man’s” having a mistress. This film had no fire hydrant humor, and there were no suggestive jokes. Instead of a blatantly depicted mistress, there was a common character type from Code movies, the delicately handled “moll.” This is usually a tough, slightly loose, and often unscrupulous woman who is the girlfriend, fiancee, or companion of a man who is depicted as a criminal, a thug, or a “heavy.” In this movie, such a character is Polly, the singer at the Lichee Restaurant. Is she Dancer’s mistress or just his accomplice in crime? How far did she have to go in her seduction of Robert to set up the crime? It never is clearly stated, so it is up to personal conjecture and opinion. Such careful handling is peculiar to the Code Era. It is neither suggestive nor immoral because you just don’t know. More noticeable than even these differences is the feeling. Although comical at times, the first Thin Man film felt very dark to me. Although it featured three murders, this movie didn’t have such a lurking feeling of darkness. The only reason I classified this film as a fair Code film rather than a good Code film is the drinking. In The Thin Man, Nick and Nora, particularly the former, drink very casually and to great excess.  They both seem like lushes. I was hoping that the alcohol use would be curtailed in the Code sequel, but, unfortunately, the improvement in this area was not significant. Nick still seemed to be at least slightly intoxicated in almost every scene, and if he wasn’t already tipsy, he had a drink in his hand. Although Nora still drank, I noticed that she drank less in this film than in the original, which I saw as a slight improvement, since female drinking was particularly taboo. Although alcohol consumption was not completely forbidden by the Code, casual heavy drinking, the glorification of alcohol, and the inclusion of drinking and drunkenness strictly for comedic purposes were discouraged. Other than that, I found this film to be Code-compliant and generally wholesome.

I really liked this film. I thought it was so much more entertaining than The Thin Man. I found both the mystery and the humor in this movie to be so much more appealing than the same elements in its pre-Code counterpart. I thought the acting was excellent. The chemistry was good between William Powell and Myrna Loy in the first film, as it always is, but it was so much more vital in this movie. They both seemed more intelligent, responsible, and decent in this movie. As usual, the dog was adorable, and I liked the inclusion of his canine family. The supporting cast was very effective and full of great actors. Elissa Landi was very convincing as the hysterical cousin, bringing both sympathy and confusion to the role. Jessie Ralph was menacingly overbearing as her harsh mother, creating an effective sense of suspense. James Stewart was the best supporting character. He gave a brilliant performance in this surprisingly deep role. The cinematography was lovely, and I enjoyed the San Francisco setting.

I highly recommend this film. Classic film fans will love it! Many have referred to it as the finest movie in the Thin Man series. I have only seen the first two films so far, but I agree that this one is excellent. Without giving anything away, I will just say that the mystery is thrilling, complex, and completed by a totally surprising solution. Fans of mystery and suspense films will really enjoy it. It has a lot of thrills without a lot of violence or any blood. Anyone who likes William Powell and Myrna Loy will love their performances in this film. James Stewart fans will appreciate his role in this movie, which, although brief, is unforgettable. If you have ever enjoyed pre-Code films, I think you will notice that After the Thin Man has the same 1930s culture without the “dirt.” If you haven’t seen many 1930s movies yet, pre-Code or Code, I recommend this as a good film to introduced yourself to the cinematography of that decade. This thrilling three-murder mystery on New Year’s Eve is a great film any time of the year!