Today is Sunday, so it is time for another 52 Code Films article. Every week this year, I have determined to watch at least one movie from the American Breen Era (1934-1954) which I have never seen before. I created this series to expand my knowledge of classic films and to continue seeking out and watching new Code movies. This is my first article in the series for August. Since August is #AMonthWithoutTheCode65 here at PEPS, I am abstaining from watching and reviewing Code films throughout this month. However, I can’t stop this series, which I planned to be weekly for the whole year, for four weeks. Thus, I am allowing myself to watch and review one Code film each week just for the sake of this series. Other than that, I will be strictly observing the no Code films rule.

Today’s topic is The More The Merrier from 1943. I have heard a lot about this movie during the past few years. I first learned about it during The Great Breening Blogathon of 2017, for which Rebecca Deniston of Taking Up Room reviewed the film. I was fascinated to learn that there was a Code original of Walk, Don’t Run, the 1966 Cary Grant comedy which my family has loved for years. I was fascinated by the idea of the familiar story of overcrowded housing being set in Washington, D.C., during World War II instead of in Japan during the Olympics. We purchased this film on Amazon Video on Tuesday, since I wanted to watch this week’s new film during #CleanMovieMonth85. 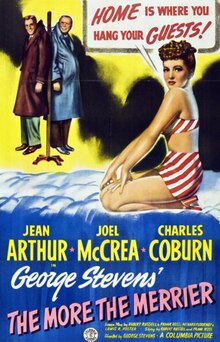 World War II is raging on two fronts in 1943, but on the home-front, there are other battles to fight. In Washington, D.C., there is a terrible housing shortage. To do her patriotic duty, a young lady puts an ad in the paper about subletting half her apartment. She is shocked when a determined older gentleman appears at her door in answer to her ad, having no place to stay since he arrived in Washington two days before his hotel reservation. He eventually talks her into letting him stay, even though she had a female roommate in mind. The indefatigable fellow quickly makes himself right at home, much to the young lady’s dismay. He struggles to stick to the detailed schedule she devised but has no trouble in promptly giving her advice about finding a clean-cut young man to marry. He finds an opportunity to do that for her when a young man working for the government shows up at the apartment in answer to the ad which he himself answered. Since the clean-cut youth will only be in Washington for one week, the schemer rents him half of his half of the apartment. The young lady is horrified to now find two men in her apartment, but she is unable to return the rent money because she spent it on a hat. She grudgingly allows them both to stay. The older tenant quickly begins matchmaking to get his young roommate together with their pretty young landlady, but she informs him that she is engaged to a very settled middle-aged man with a lot of stability but clearly little romance. The first tenant knows his duty: he must break up this two-year engagement and arrange a marriage to break down the wall between the potential young couple. 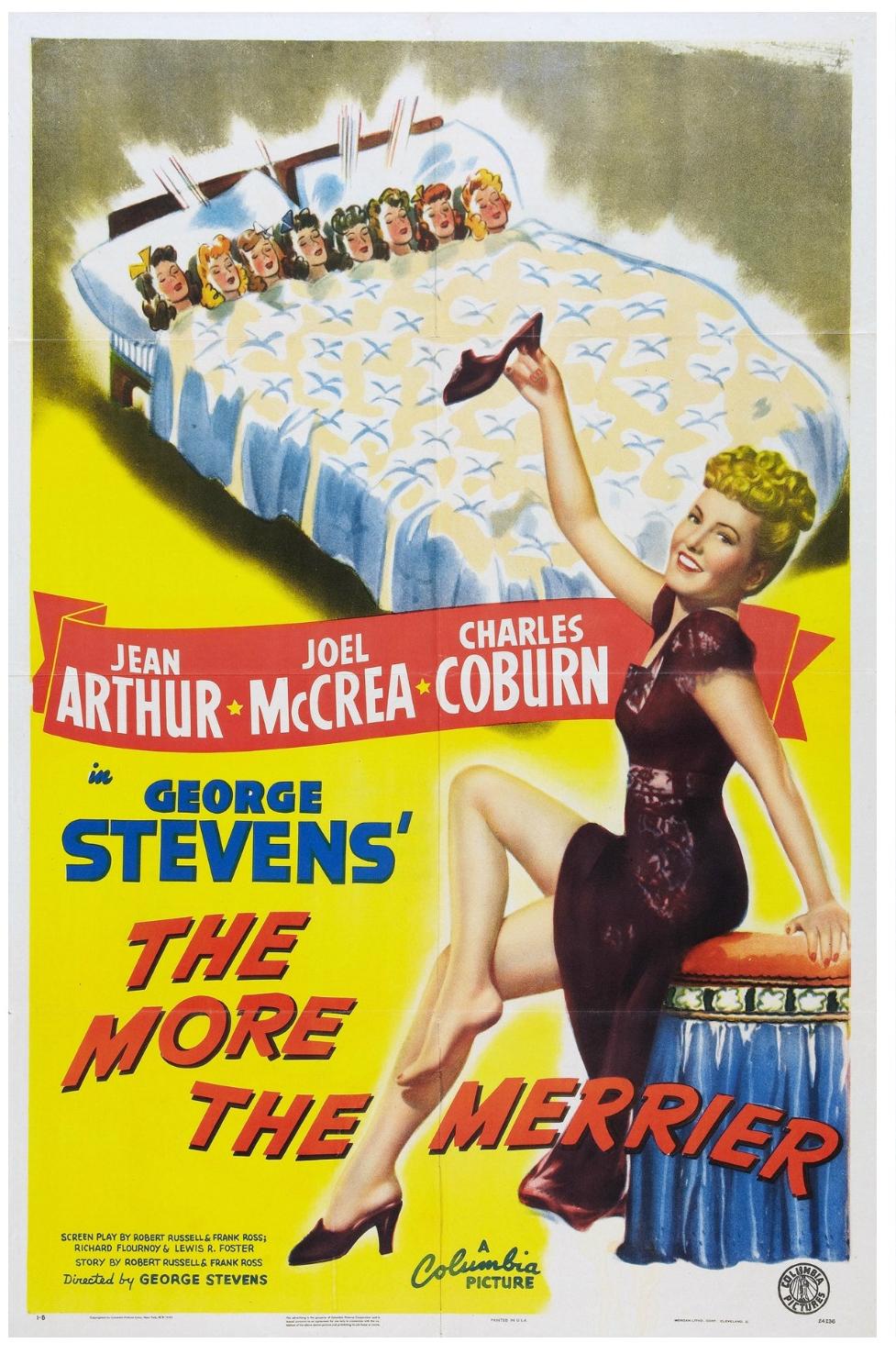 The young lady who decides to sublet half her apartment is Connie Milligan, played by Jean Arthur. The determined older gentleman who becomes her tenant is Benjamin Dingle, played by Charles Coburn. The young man who works for the government and ends up renting half of Mr. Dingle’s half of the apartment is Joe Carter, played by Joel McCrea. The stuffy man to whom Connie is engaged is Charles J. Pendergast, played by Richard Gaines. 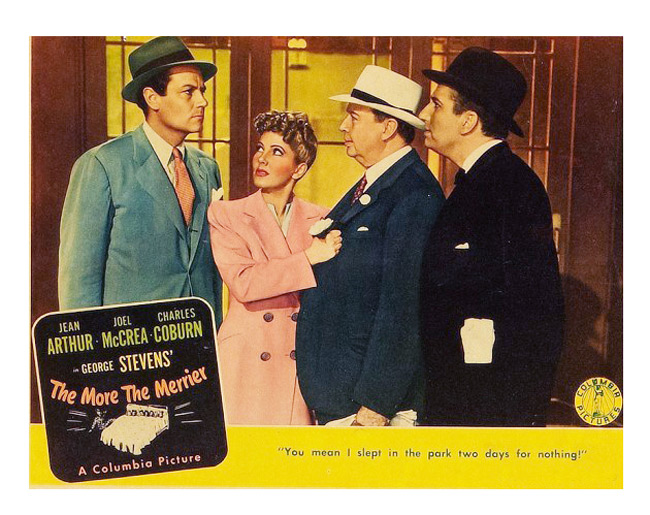 This is a fair Code film. The basic premise is entirely acceptable. There is nothing indecent about the situation of the two gentlemen living with the young lady, since, although it is a little irregular, there is no implication of immorality. Also, unlike in the 1966 remake, the potential of people thinking the wrong thing is not emphasized too much. In fact, I was very pleased by the delicate handling of the whole situation. However, there are four things which made me classify The More The Merrier as less than a good Code film. Firstly, there was a line which sounded like a forbidden expression. Joe asked where their rent money was, and Mr. Dingle replied, “In her hat.” This is a subtle reference to the forbidden expression “in your hat.” In this case, it was literal, since Connie had spent their rent money to purchase a new hat. However, I am sure that the near forbidden expression was not a coincidence. Secondly, in a scene in which Connie was shown changing from one outfit to another, she was shown from the shoulders up before she put on her robe. No straps of a full slip were visible, but the edge of what looked like a strapless brassiere could be glimpsed for a moment. It was usually forbidden to show a lady in just her brassiere, and this brief shot came a little too close. Thirdly, in the last scene, Connie is shown in her nightgown, which is depicted on several posters. It has a strip of unlined lace at the waist, and the skirt is transparent, at least on the side. You only can tell how revealing it is for a few brief shots, since the rest of the scene is dark or shot above the waist. However, I was quite surprised by this costume. All these elements, however, are very brief and quite easy to miss. The main reason this film is fair is because of language. When Mr. Dingle first arrives in Washington, he sees a statue of Admiral David Farragut, emblazoned with his famous quote, “Damn the torpedoes – full speed ahead!” Mr. Dingle finds this motto to suit his own mentality perfectly, so he adopts it as his personal motto. He quotes this saying very frequently throughout the rest of the film, sometimes even singing it three times in a row in a little patriotic ditty. The first word of this saying is technically a profane word which is forbidden under the Code. However, the Code makes an exception for this banned word and the word hell under a few circumstances: “excepting when the use of said last two words shall be essential and required for portrayal, in proper historical context, of any scene or dialogue based upon historical fact or folklore, or for the presentation in proper literary context of a Biblical, or other religious quotation, or a quotation from a literary work provided that no such use shall be permitted which is intrinsically objectionable or offends good taste.” Although not really a literary quotation, this usage is a quotation from a very well-known patriotic saying. That fact, plus the fact that this was made during war time, was doubtless the reason why the PCA allowed the usage of this word. If it was said just once, it would not necessarily make the film fair. However, I think the quotation exception was overused. If he says that quote once, he says it twelve times! For these reasons, I am compelled to classify this as a fair Code film. Despite that, this is a very enjoyable and generally wholesome film.

I really enjoyed this film. I thought it was an excellent movie. There are many aspects of it which I like better than the 1966 remake. It is very fun and bright and warm in the way which only Code films are. I like the remake, and there are a few small elements which I prefer about it. Although it is quite mild for a 1966 film, there are many elements and situations of the Shurlock Era film which bother or embarrass me and which I was glad to not see in this film. The acting is excellent. Jean Arthur is really cute in her role. I truly enjoyed her performance. She wore some lovely costumes, as well. This is only the second film in which I have seen Joel McCrea. I do not particularly like his performance in The Palm Beach Story, but I find that film in general to be quite poor, so it isn’t necessarily his fault. I liked him much more in this movie. I can’t say that he won me over completely, and I doubt he will ever be one of my favorite actors. However, I thought he was very good in this part, which I found to be a humorous blend of blandness and almost crazily comical behavior. His love scenes with Jean Arthur were very tender and sweet. Charles Coburn was lively, hilarious, and very self-assured in this role. It was a perfect part for the talented gentleman. He certainly deserved his Academy Award. The script was clever, and the direction was smooth. This is a very entertaining movie. 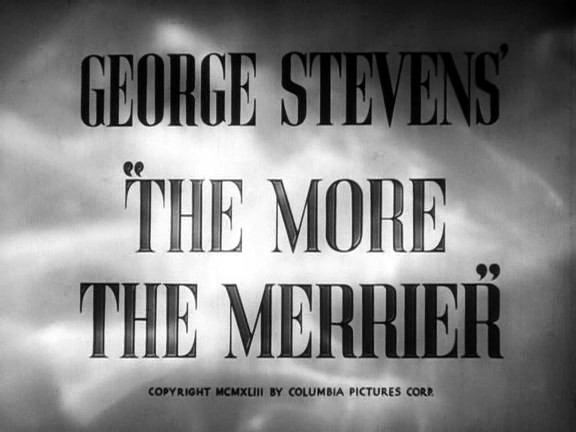 I highly recommend this film to my readers. It is a great comedy. It’s frequently classified as a screwball comedy, but it isn’t too zany for serious viewers. I found it very fascinating to see some different aspects of American life during World War II. Few people who are living now are old enough to really remember what life was like during the war, and there are some things which history books don’t tell you. You have to get into the daily life of those times to know that cabs had to be shared to conserve gas, and the best way to do that is by watching movies set and made during those times. If you have seen Walk, Don’t Run, you should definitely see this movie. You may like it more, you may like it less, or you may be able to appreciate both. I find myself leaning toward the last option, but I think the Code film has to win in the end. Now is a great time to discover or re-watch the remake, since the late Shurlock film which marked Cary Grant’s last film appearance is a great film choice for #AMonthWithoutTheCode!