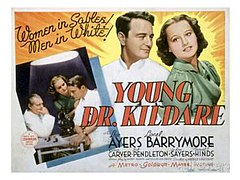 Today’s highlighted film is Young Dr. Kildare from 1938. This is the story of a medical intern who accepts a position at a big New York hospital instead of joining his father’s small town practice. At the hospital, the determined young man conflicts with a stubborn old diagnostician whom he admires as he risks his job by defending the sanity of a suicidal girl everyone else insists is psychopathic. This film stars Lew Ayres, Lionel Barrymore, and Lynne Carver. It was directed by Harold S. Bucquet,  produced by Lou L. Ostrow, and released by MGM. This is a perfect Code film because it depicts medical procedures and topics with great delicacy and tact, it properly handles the situation of a woman believing she has compromised herself, and it teaches the importance of doing what you know to be right at all costs. I like this movie because it was the beginning of a very dramatic and very stirring series about the medical profession and the staff of the Blaire General Hospital. My favorite thing about it is the dynamic interaction between Lew Ayres and Lionel Barrymore, two very talented actors who play off each other with intensity as well as humor.

Click the above image to buy the whole Dr. Kildare series on DVD at Amazon and support PEPS through the Amazon Affiliate program!