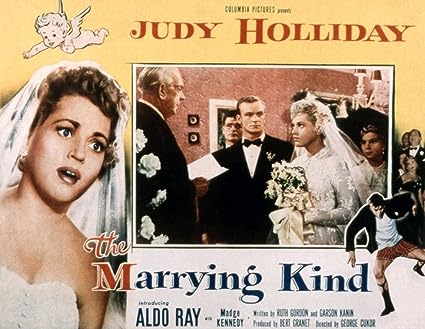 Today’s highlighted film is The Marrying Kind from 1952. This is the story of a married couple who are questioned about their life together by the judge who is overseeing their divorce case but feels that they can be reconciled. As they recount their often difficult years together, they may realize that they love each other enough to move on from their tragedies. This film stars Judy Holliday, Aldo Ray, and Madge Kennedy. It was directed by George Cukor, produced by Bert Granet, and released by Columbia Pictures. This is a perfect Code film because it shows the importance of fighting for one’s marriage, no matter what trials and tragedies befall it. I like this movie because of its realism and its frank depiction of a married couple’s problems. My favorite thing about it is the excellent dramatic acting from Judy Holliday, who is often remembered just as a comedienne but who was also excellent in serious roles.