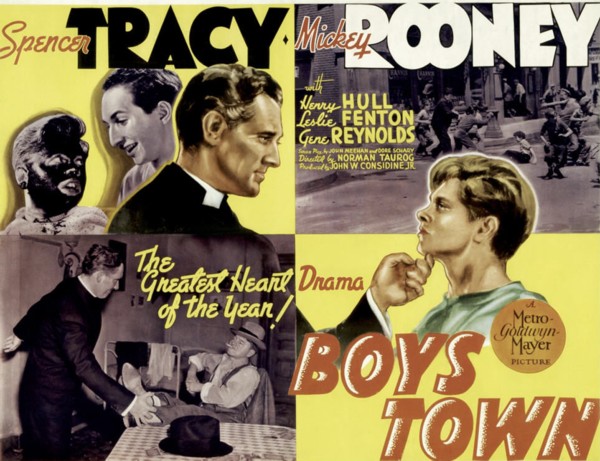 Today’s highlighted film is Boys Town from 1938. This is the story of a priest who founds a home for wayward or potentially delinquent boys, since he thinks that reform schools don’t offer moral guidance. His single home soon develops into a whole town governed by boys, but the whole organization may be destroyed by one rebellious youth if the priest can’t reform him. This film stars Spencer Tracy, Mickey Rooney, and Henry Hull. It was directed by Norman Taurog, produced by John W. Considine Jr, and released by MGM. This is a perfect Code film because it shows how much good one man with a selfless cause can do and how important it is for the youth to have wholesome and uplifting influences rather than corrupting ones. I like this movie because of the wonderful acting, especially between Spencer Tracy and the talented boys of many ages, led by the brilliant Mickey Rooney. My favorite thing about it is the message that Boys Town promotes decency but does not force the religion of its founder, a Catholic priest, on the boys, just like the Code did not demand Catholic morals in movies but encouraged decency.

Click the above image to buy this movie on DVD at Amazon and support PEPS through the Amazon Affiliate program! This DVD also features the hard to find sequel, Men of Boys Town from 1941.