It is time again for Breening Thursday. Today is June 6, 2019, the seventy-fifth anniversary of Operation Overlord, also known as D-Day, when thousands of allied troops, led by the United States, stormed the beaches of Normandy, France. I considered breening a movie about D-Day, such as The Longest Day from 1962 starring John Wayne. In honor of this day and out of respect for the men who died for our freedom, I decided against it. Instead, I have chosen a  lighthearted military-themed film,  covering the time just after the end of the war in Europe.

Operation Mad Ball from 1957 is a military comedy starring Jack Lemmon, Arthur O’Connell, and Ernie Kovacs , set in a hospital unit in France. The film was directed by Richard Quine, who was an actor during the Breen Era. This film has very few Code violations, and all of them are surface problems. It is my opinion that Richard Quine was keenly aware of the ingredients needed to make a film that is acceptable to all viewers. 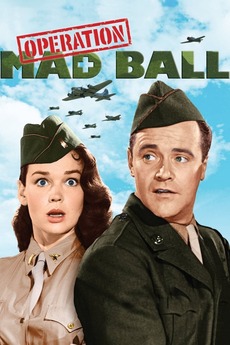 The setting of this film is one that could easily have led to many problems. On the Army base, there are hundreds of enlisted men, many of them fresh out of war and anxious to meet the right girl, fall in love, and get married. At the same time, there are dozens of young nurses working at the base hospital. The problem is that it is strictly against regulations for enlisted men to fraternize with commissioned officers, which each nurse happens to be. A group of the soldiers, led by the smooth operating Private Hogan (Jack Lemmon), arrange a big shindig in a nearby town where the nurses and privates may co-mingle. Bribery, supply smuggling, and all sorts of mischief make this film hilariously entertaining. With a few slight changes, this could have been a good Code film. 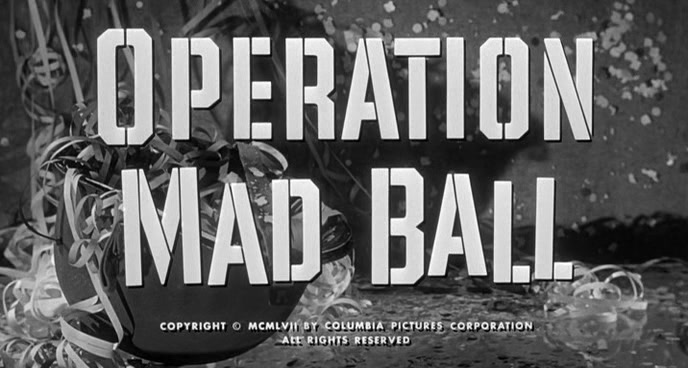 Now, with no further ado, let the breening begin!

The film opens with a private and nurse, standing among some bushes in an embrace, kissing passionately. The kiss is much too passionate, and the setting is much too dark. It would have been sufficient to have them walking hand in hand on a well-lit path.

Later, one of the soldiers (William Hickey) is reading rules from the Army regulation book. He gives his personal interpretation of one of the rules by saying, “Now suppose you want to, and she don’t,” and then goes on to say, “Or suppose she wants to, and you don’t.” This is very suggestive language and should be changed to, “Now suppose you want to kiss, and she don’t,” and “Or suppose she wants to kiss, and you don’t.” In this way, there is no speculation about to what want to is referring.

In their search for a place to hold the Mad Ball, Private Hogan says, “There must be someplace in all of France where you and Lieutenant Schmidt can get together.” Rather than say get together, he should say something like have a date.

Later, the female innkeeper (Jeanne Manet) of the hotel chosen for the ball argues with Hogan.  Referring to the young soldiers who are restricted from dating nurses, he says, “They cannot love each other – except, as it were, under the counter.” On its face, this simply could mean secretly or out of sight. The problem is in the innkeeper’s response. She says, “Everyone to his own taste,” which gives an inference of risque intimate contact. Her line must be removed.

In a scene in which the nurses are showering, the shower walls are too short. We can clearly see the nurses shoulders and upper chests. It would be more decent for the scene to take place in the barracks while the nurses are primping, none being in less than a full slip, of course.

One of the GIs assigned to the morgue describes one of the corpses as “sagging in the middle.” This is disgusting and needs to be removed.

Later, Hogan has to invent fatal injuries for a deceased POW whom he was supposed to convey to the morgue. He describes the injuries in a very graphic manner. He says “tibia – fractured, compound” then “skull – fractured, compound.” A compound leg fracture makes me wince, but the image of a compound skull fracture is unthinkable. This line should be removed. Some less grotesque injury should be invented as his caused of death. In a later scene, Captain Lock (Ernie Kovacs) describes an autopsy he witnessed. He mentions the skill of the doctor in opening the abdominal flap “just like a bureau drawer.” This is grotesque and should be removed.

When yelling a complaint to Private Hogan, Sgt. Perkins (William Pierson) warns him, “You’ll find me hanging from the big tree behind the patient’s mess.” This is morbid and should be changed or removed, since any flippant reference to suicide is questionable.

Two German POWs working at the base are discussing bed pans, which is forbidden under the Code because of its vulgarity. This Code infraction is veiled slightly by the soldier’s poor English. He says “pan bett,” incorporating the German word for bed, instead of “bed pan.” I did not notice this until my daughter pointed it out. An actual bed pan is handed to the POW, which clarifies what is being discussed. This exchange is not appropriate and should be removed. Incidentally, bathroom humor is standard practice in almost every film these days, including animated children’s movies.

Private Hogan is describing symptoms of an ulcer he pretends to have to Lieutenant Bixby (Kathryn Grant). Inquiring about possible symptoms, she asks, “Belching?” This should be changed to indigestion. 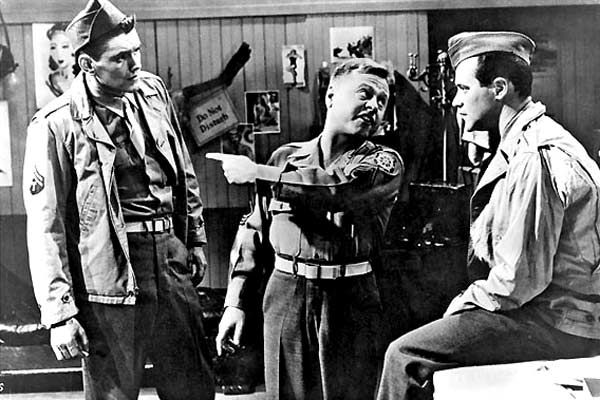 Private Hogan needs help from Master Sargent Yancy Skibo (Mickey Rooney) to secure his Mad Ball. He entices his enthusiastic fellow-soldier with the measurements of a nurse, Lieutenant Tweedy (Marilyn Hanold), whom he can secure as Yancy’s date at the ball. This is not appropriate and should be changed.

In response to the measurements, Skibo replies in rhyme, “37-24-35! Man, with that, I would love to jive.” Both the measurements and the rhyme must be changed or removed. At the Mad Ball, the base’s commanding officer, Colonel Rousch (Arthur O’Connell), enters unexpectedly. All party-goers suddenly stand at attention. There is a woman in front whose dress is extremely low cut. The neckline must be raised.

At the Ball, Lieutenant Tweedy’s neckline is much too low and must be raised. 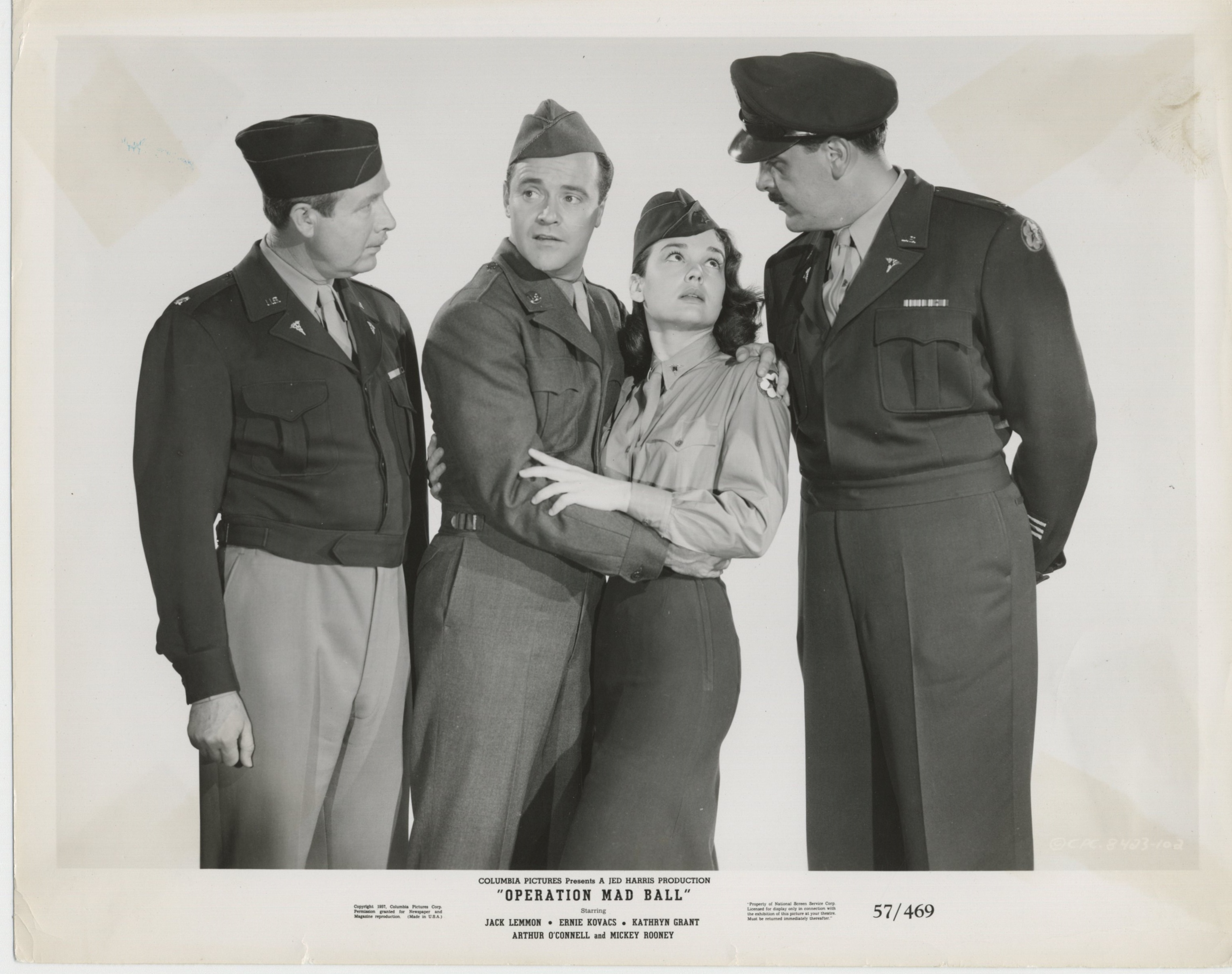 This concludes my breening of Operation Mad Ball! It is a hilarious movie, and I do recommend it. As always, when you watch this movie, keep my breening points in mind. Most importantly, breening would remove the flavor in the film that the enlisted men are “up to no good.” With these slight changes, all our boys in uniform would be depicted as hard-working young men who are understandably lonely for female companionship. The Code made sure that they always had good intentions!

Today and everyday, let’s remember the valiant sacrifice which millions of soldiers gave for the cause of freedom during World War II. It has now been seventy-five years since the great victory in Normandy, but the spirit behind that victory should inspire our nation forever. We must never forget the patriotism and the ideals which were so important during the 1940s. There is no better way to remember than by watching the films which were made during that time. With the careful guidance of the Code, they depicted the struggle for freedom, the victory, and the world afterward. To all the veterans of that war and every other fight for freedom, both living and dead, thank you for your service!

Click the above image to buy this movie on a 4-Pack Jack Lemmon DVD collection at Amazon and support PEPS through the Amazon Affiliate program!