Today would have been Jimmy Stewart’s 111th birthday. Happy Birthday, Mr. Stewart! In honor of this anniversary, Movie Critic of Movies Meet Their Match is hosting a blogathon in this wonderful classic actor’s honor, the Jimmy Stewart Blogathon. Yesterday, I participated in this blogathon with an article about Jimmy Stewart’s second credited role, the murderous John Flower in Rose Marie from 1936. Today, I am writing a contrasting article about another film he made in 1936, Born to Dance. His third time playing the leading man, this Eleanor Powell musical marked the first time he sang onscreen as well as one of the only times he appeared in a really musical role. In addition to that, it is one of my favorite films with the incomparable Jimmy Stewart. 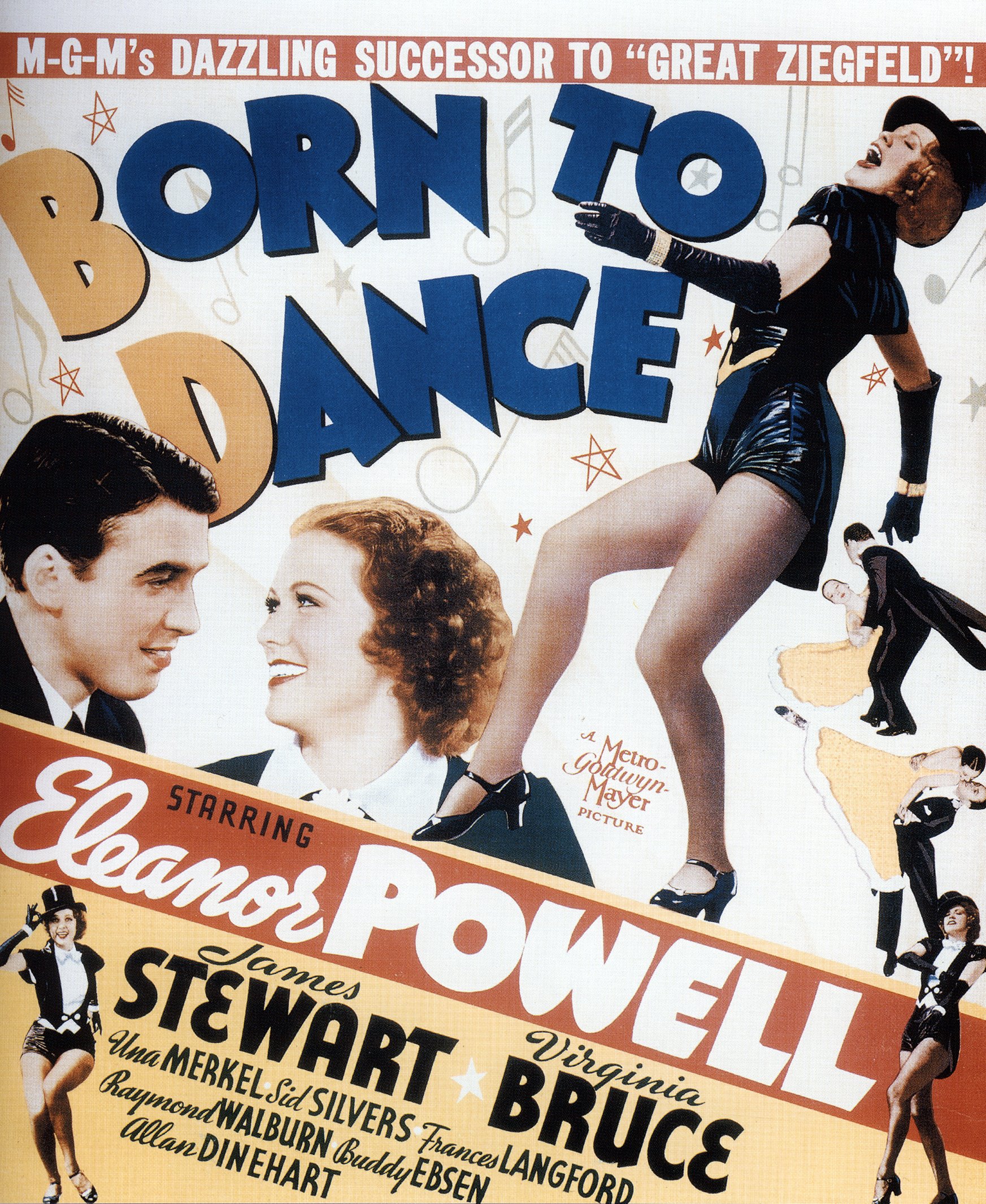 This is the story of three sailors on leave in New York who are looking for true love in the big city. Gunny Saks (Sid Silvers) is a married man who wed his partner in a dance contest four years ago and joined the Navy a few days after the marriage to become more worldly. Jenny (Una Merkel) is his wife, who works at the Lonely Hearts Club and doesn’t want to tell Gunny that they have a three-year-old daughter until she decides if she likes him. Mush Tracy (Buddy Ebsen) is a comical sailor who invents funny things and is also a loose-legged dancer who plans to return to the stage when he gets out of the Navy. Peppy Turner (Frances Langford) is a waitress at the Lonely Hearts Club and a cute singer who isn’t sure she likes the laid-back Southern sailors who’s “nuts about” her. Finally, Ted Barker is a young officer on the submarine who goes into the Lonely Hearts Club as a favor to his shipmate Gunny and soon finds himself smitten with a beautiful tap-dancer. Nora Paige (Eleanor Powell) is a talented singer and dancer who wants to make it on Broadway but who quickly grows to love the boyish charm and sincerity of Ted. Aside from Jenny’s comical shunning of Gunny, there are no problems in sight for the young sweethearts. Ted is mildly concerned about success changing Nora, but he wants the best for her. After getting out of the Navy in a couple of weeks, he wants to make plans for the future with Nora. However, trouble ensues when he gets pulled into a romantic publicity campaign with Lucy James (Virginia Bruce), a glamorous Broadway star whose dog he rescued from drowning. When the flirtatious Miss James really starts falling for the handsome sailor, Nora believes that Ted returns her feelings. Will the sweethearts be able to clear up the misunderstanding and have their own happily ever after, despite the selfish scheming of Lucy James? Watch the movie to find out! 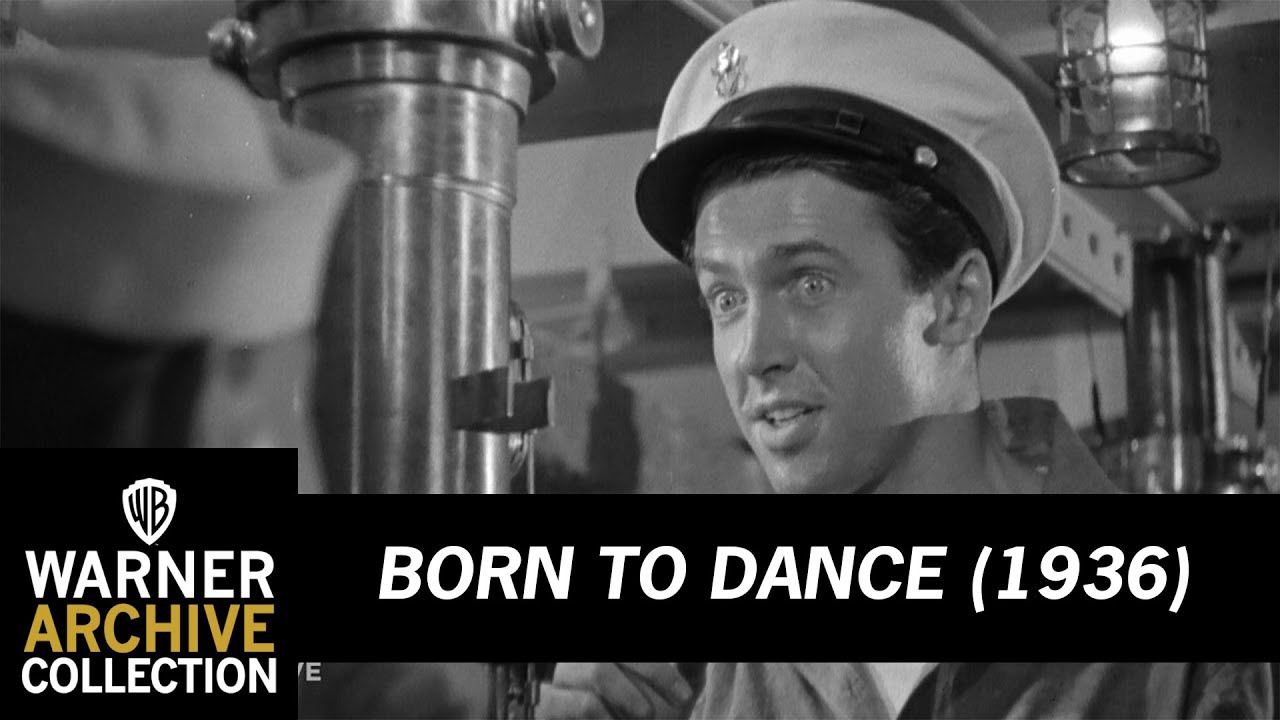 One of my favorite things about this movie is its music. It is filled with wonderful songs by Cole Porter and elaborate musical numbers based around them. The movie opens with “Rolling Home,” a rousing song sung aboard the submarine which is bringing our three primary men back from their tour in the Navy. All the sailors are singing about how happy they are to go home to America and see their loved ones again. As well as excellent male-chorus work, it includes solos from all three main characters. Jimmy Stewart charmingly delivers his first on-screen singing in this number as he musically recounts the time he saw a beautiful girl doing the hula in Hawaii but couldn’t pursue the romance because he was watching her through a rusty periscope.

Next, we see Eleanor Powell’s dancing skills for the first time in her impressive number at the Lonely Hearts Club, “Rap-Tap on Wood.” She sings (over-dubbed beautifully by Marjorie Lane) and dances up a storm. She is accompanied by The Foursome, four sailors playing ocarinas and hornpipes in a nautical ensemble. She is amazingly flexible and precise, beautifully combining balletic turns with gymnastic stretches, intricate tap rhythms, and effortless grace. This number is adorable and so 1930ish!

The next number is my favorite in the movie, “Hey, Babe, Hey,” which could also be called, “I’m Nuts about You.” In typical 1930s style, this musical number seems to go on forever, and I love every minute of it! Everybody gets in on this number, so it keeps going, being picked up by different people. Eleanor Powell, Jimmy Stewart, Sid Silvers, Una Merkel, Buddy Ebsen, and Frances Langford sing together in couples and in unison as well as solo. In addition, everyone dances with great gusto. If you have ever been curious about the extent of Jimmy Stewart’s dancing talents, watch this number to find out! He keeps up beautifully with Eleanor Powell as he waltzes, taps, does bell kicks, and lifts her. It’s adorable. I love the way everyone, including actors who weren’t known for musical talent, gets involved in this number. The wonderful thing is that everyone has great talent! This is Jimmy Stewart’s big dancing opportunity in this film, and it’s marvelous! You’ll be humming the tune for hours after watching the movie.

The next musical number is back on the ship, when Lucy James comes to visit the submarine, accompanied by her constant companion, a Pekingese named Cheeky. With the sailor chorus, the comical singing of the eccentric captain played by Raymond Walburn, and the almost-classical vocalizing of Virginia Bruce, this clever chorus seems like a number from a Gilbert and Sullivan operetta rather than a Cole Porter musical. The melody is excellent, and the lyrics are so clever.

That number segues into one of the cutest songs in the whole movie, Lucy James’s solo “Love Me, Love My Pekingese.” This catchy, cleverly-lyricized song sounds like a Cole Porter standard, but I have never heard it outside of this movie. It certainly deserves to be well-known. The snobby actress’s description of her picky little pup is adorable and should be very popular among modern dog lovers. The sailor chorus provides a great background for this number.

Next is the big romantic duet in the movie, the now-famous “Easy to Love.” Ted and Nora sing this love song to each other in Central Park. Jimmy Stewart had the honor of debuting this iconic song in this movie. His singing is very beautiful, and his sustained falsetto notes are very impressive. Then, the two walk and dance through the park. Eleanor Powell does some beautiful dancing as the music reprises in a new arrangement while Jimmy Stewart pretends to conduct with a stick. It seems the fun is at an end when a policeman (Reginald Gardiner) walks up. He breaks Ted’s stick. However, he shocks us all by silently removing his cap to reveal long, flamboyant hair. He makes a baton by removing the stick from a balloon. Then, as the sweethearts watch in disbelief, he dramatically conducts an orchestral arrangement of “Easy to Love,” which is beautifully interwoven with classical pieces. He is hilarious! Eventually, the sweethearts start waltzing to the imaginary music he is conducting. Then, they run away before the insane constable collapses from the exhaustion of his strenuous conducting! Unfortunately, Nora isn’t the only one who finds Ted “Easy to Love.” Emotional Broadway star Lucy James also can’t get the gob out of her mind, so she invites him over to her apartment for dinner. Although her agent wants her to use the romance for publicity about her new show, she wants their courtship to be strictly private. After dinner, she serenades him with the extremely-popular “I’ve Got You Under My Skin,” which was heard for the first time in her dignified rendition. This song was nominated for a Best Song Academy Award. It is so interesting to hear really well-known songs performed for the first time and see how they were different than in later recordings.

The finale is a musical extravaganza featuring the song “Swingin’ the Jinx Away.” It is one of those musical spectacles which concludes most 1930s musicals, especially those from MGM. It is supposedly a Broadway number, although the set is too elaborate for any stage. Nonetheless, it is spectacular. It begins with Frances Langford singing the peppy, cheerful lyrics which are unmistakable anti-Depression propagand, a combination of general encouragement, patriotism, and a reliance on lively swing music as a solution to people’s problems. Then, Buddy Ebsen sings and dances, propelling the theme around the country by singing about different regions in relation to jazz. Finally, Eleanor Powell comes out in a spiffy black outfit and begins a sensational tap number in front of many sailors playing musical instruments. The whole number has a naval theme, and the set mimics a ship. The spectacular number ends with a patriotic canon salute! It’s a grand finish. 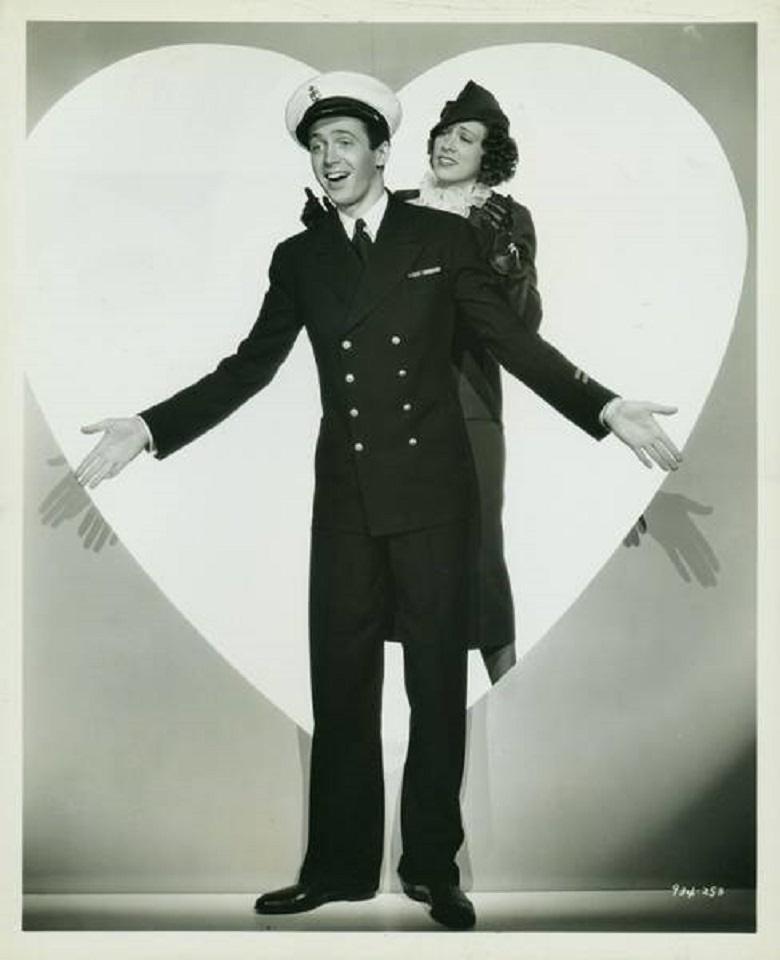 Jimmy Stewart is sensational in this movie. He delivers great dialogue and acts so sweet and genuine, making the scenes between musical numbers just as much a treat. This movie has a delightful mixture of music, comedy, and conflict to make it highly-entertaining. The women’s costumes are adorable, and the men look spiffy in their uniforms. Ted Barker is a perfect example of a wholesome young gentleman as depicted in a Code film. After meeting Nora, he has perfectly honorable intentions toward her. He candidly tells his shipmates that she is the sort of girl he has been trying to find. “Beautiful eyes, lovely hair,” he admiringly muses. Meanwhile, she confesses to Jenny that she fell in love last night. Their relationship is so wholesome, such a good example of a proper but very romantic courtship. This is a great example of a good Code film. It is wholesome and thoroughly entertaining with a charming plot and fantastic actors. Jimmy Stewart and Eleanor Powell are a great pair. It’s easy to believe that they find each other “Easy to Love.”

I love Jimmy Stewart in his dramatic performances in Frank Capra films. Nothing can parallel his stirring portrayals of characters like Jeff Smith and George Bailey. However, if I want to watch a movie with Jimmy Stewart, I gravitate toward this film on all occasions. It is neither as long nor as emotionally-stirring as his more serious films. I don’t have to get emotionally-involved. I can just relax as I am carried away by the music, the romance, and the wholesome charm of a 1930s Code film. Jimmy Stewart was one of a kind. There was something undeniably special about him. This movie shows his early acting talent and his unappreciated musical abilities. Jimmy Stewart truly was born to act. Happy Birthday to one of the best actors of the Golden Era of Hollywood. There will never be anyone else like him! 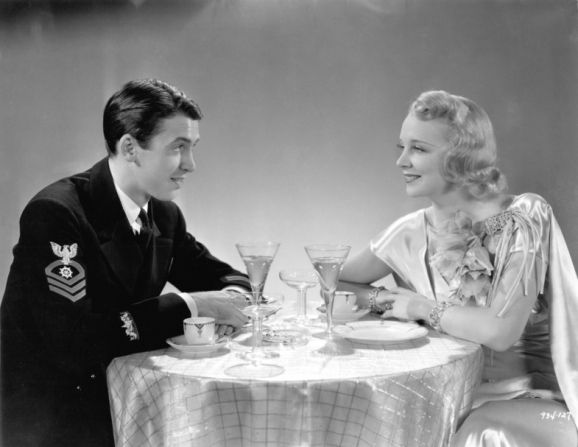 Ted, not able to pay their night club bill: “I’m afraid I’m a little shy.” Lucy: “That’s what I like about you.” My sentiments exactly!

Click the above image to buy this movie on an Eleanor Powell collection on DVD at Amazon and support PEPS through the Amazon Affiliate program!