Today is May 12, so it is time for another 52 Code Films article! It is also Mother’s Day, so I want to wish a special Happy Mother’s Day wish to all the mothers throughout the world who read my article. For many of us, classic films remind us of our mothers. Many of us were introduced to old movies by our mothers, and many have special memories of favorite movies we’ve shared with our mothers. The love which both my parents have always had for decent, wholesome movies from the Golden Era of Hollywood has made me become a devoted classic film fan. This weekly series is a challenge I designed for myself to continue expanding my scope of classic movies. Every week this year, I have determined to watch and review at least one American movie made between July of 1934 and 1954 during the Breen Era of Hollywood. I am on my 19th week and have loved the series so far! 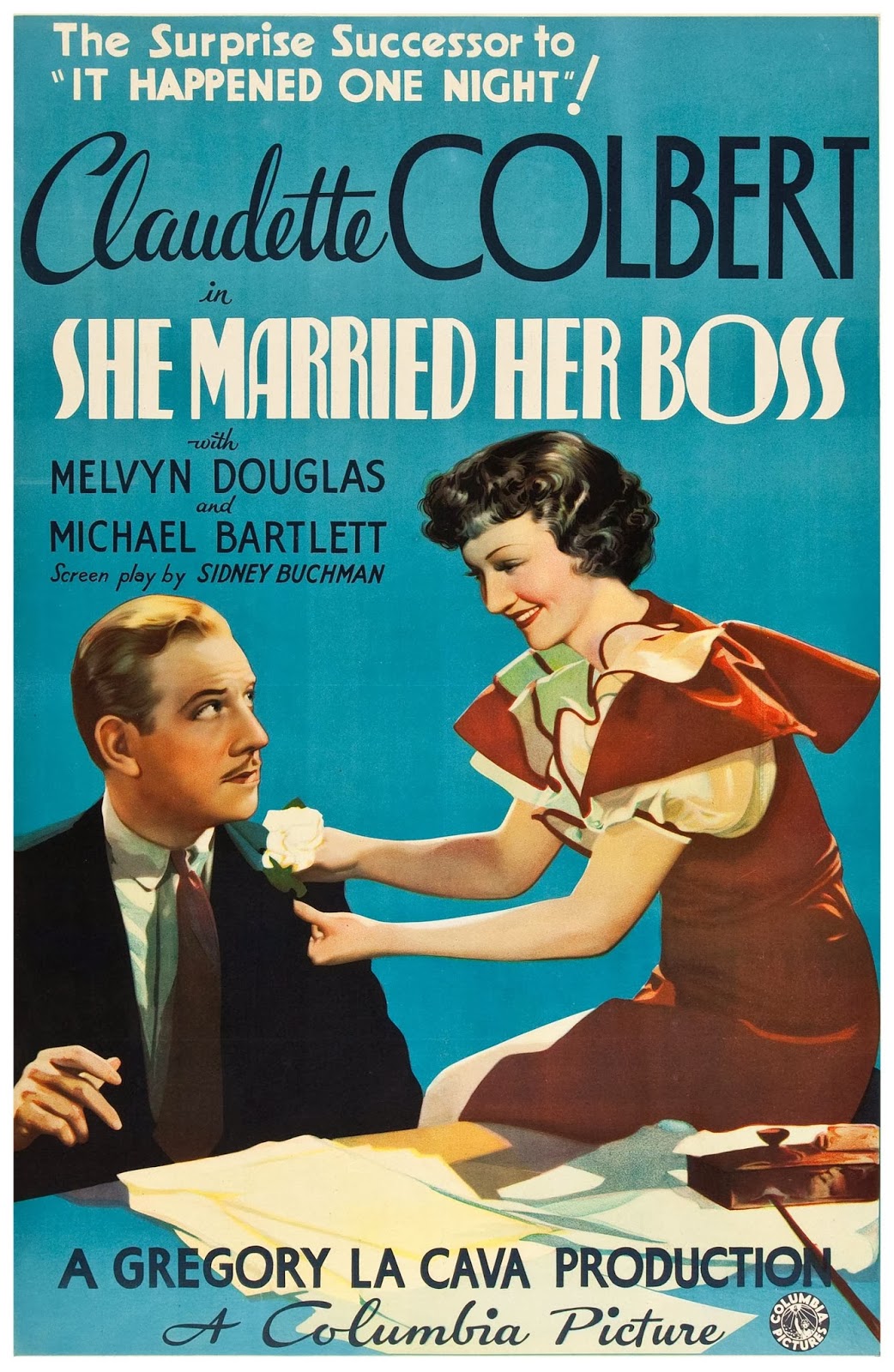 This week’s topic is She Married Her Boss from 1935. This comedy with Claudette Colbert and Melvyn Douglas is the earliest film I have featured in this series so far. I watched this movie on Thursday. It is included for free with Amazon Prime Video. On Thursday afternoon, I was scrolling through the classic films which are included for free with Prime, looking for a movie I could watch for this week’s topic. The cast and brief synopsis intrigued me, so I decided to watch it! 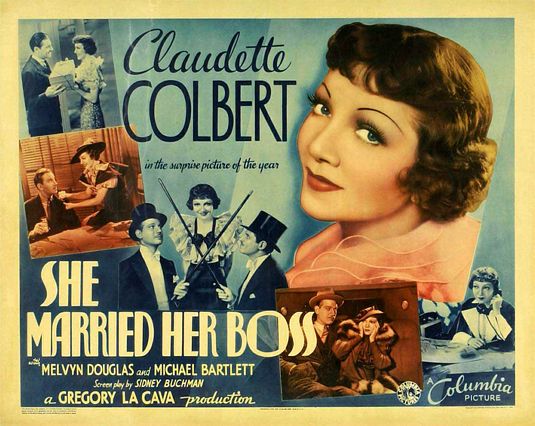 A highly-efficient but very beautiful young lady is the secretary of the owner of a huge department store. She has helped him run the business smoothly for six years, but during that time she has been madly in love with him. Although she has a highly-successful career, all she wants is to marry her businesslike but handsome employer. Meanwhile, she is being romantically pursued by the playboy whose failing department store her boss is absorbing. However, she is uninterested in the charming cad. Her cynical friend warns her that her beloved’s house is a mausoleum inhabited by an icy sister, a spoiled daughter from a failed marriage, and a host of ancestral traditions. Wanting to see for herself, the secretary connives a way to work at her boss’s house one evening. As the older woman warned, the house is chaotic, torn between the stubborn, snobby traditions of the sister and the tyrannical brattiness of the daughter. The secretary asks permission to be in charge of the household a few hours to reorganize, and her boss consents, much to his sister’s disgust. She discharges most of the servants when she discovers that they have been falsifying the books, and she gives the spoiled daughter a good spanking. Back in her apartment, she tells her friend that she thinks she has ruined all her chances by taking charge, but her confidant tells her to strike while the iron is hot. The next day, the friend tells the employer that the perfect secretary is going to leave him to accept a job in Paris. The employer is desperate not to loose his irreplaceable assistant. That night, he proposes marriage to his secretary, explaining that it would be an excellent business arrangement. He doesn’t realize that his bride has more than a business merger in mind. While she has been in love with him for years, he doesn’t think of her romantically at all. She decides that she must liven up the household and hopefully bring her husband back to life in the process. She opens all the drapes of the stuffy old mansion but fails to make any sunbeams shine on her new sister-in-law. She befriends the new butler, who approves of her reviving efforts. Also, through clever means, she guides her stepdaughter to use her imagination for something creative rather than destructive by encouraging her to write a song about two stuffed toys. However, her efforts will all be futile if her marriage is not successful. Her husband is rarely at home, and he is upset that she has deserted her job to “act like a woman.” Will she be able to turn her boss into a husband? 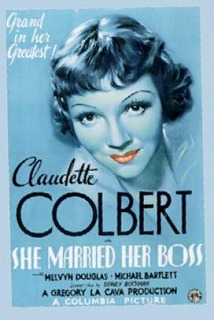 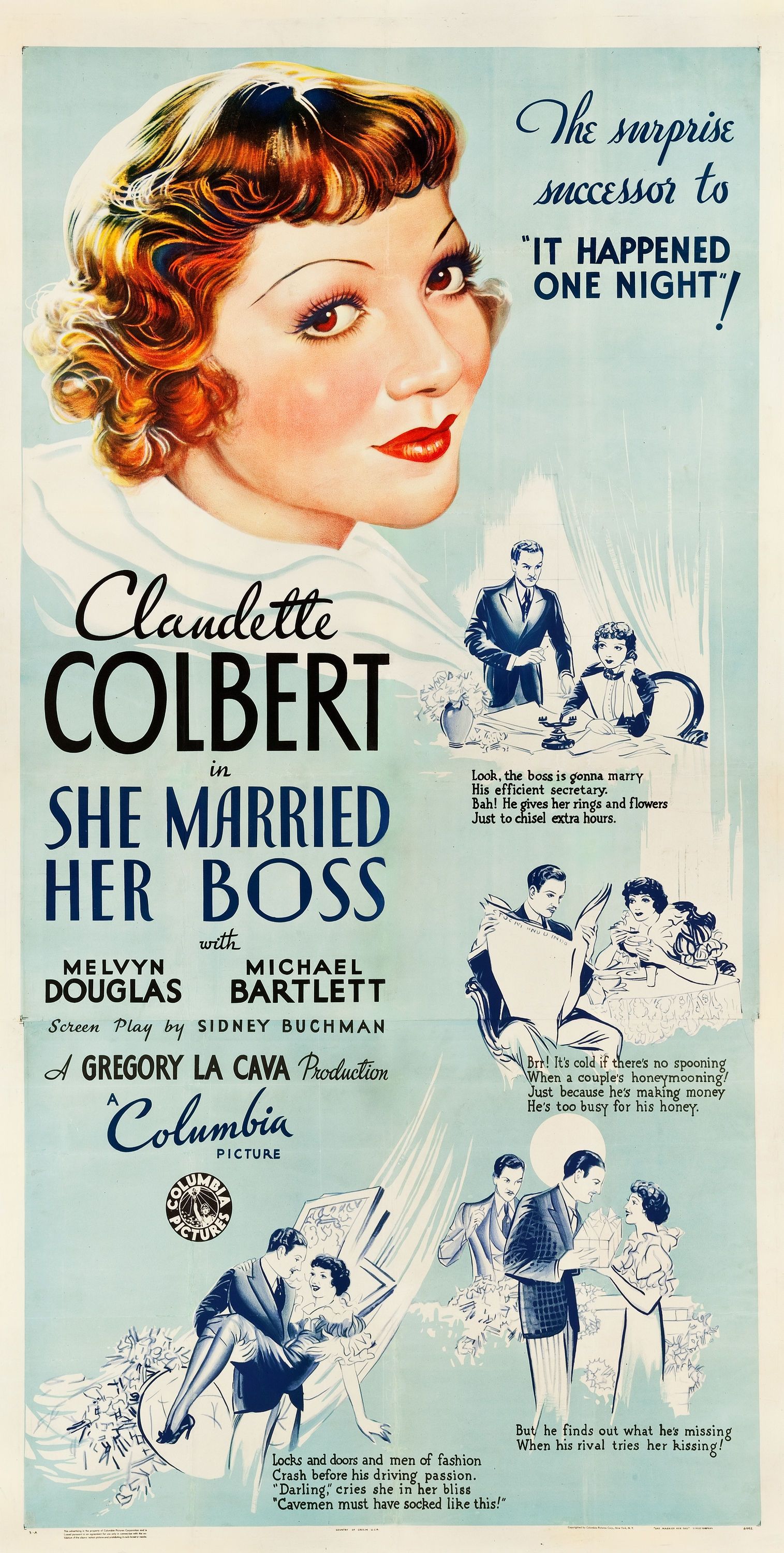 This is a poor Code film. It is the third film with this classification that we have had in this series so far. It joins this category for the same reason that the other new Melvyn Douglas film I watched did: it features divorce and remarriage. Like Mary Astor’s character in And So They Were Married from 1936, Melvyn Douglas’s character in this movie is divorced, yet he marries the leading lady. Although the Code did not specifically forbid divorce and remarriage in its list of rules, it demanded that the holy state of matrimony be upheld. In pre-Code films, divorce and remarriage ran rampant. Marriages were formed and broken so often and easily in those questionable early talkies that marriage itself seemed very cheap, frivolous, and inconsequential. However, the amount of divorce and remarriage which was depicted decreased significantly during the Breen Era. There were many instances where Code films’ plots were changed to avoid a character’s being divorced. However, the fact that the rule was not plainly stated led to exceptions, such as this. There is a similarity between the two divorce-caused poor films aside from Melvyn Douglas and Edith Fellows’s presence which should be acknowledged. Both are from the early Breen Era, the mid-1930s. This movie was released on September 19, 1935, and And So They Were Married was released on May 10, 1936. The first film has PCA Seal of Approval #1116, and the second one has Seal #2059. Although over 2000 Seals of Approval may not seem like just starting, the Production Code Administration truly was still gaining steam in 1936. I would say that it really wasn’t until 1937 that culture itself had changed. By then, even evening gown styles had reformed to more conservative fashions. After the Roaring Twenties and four years of wild abandon during the Pre-Code Era, it took Hollywood a few years to learn new tricks. However, aside from the divorce issue, this is a totally Code-compliant film. It is very clean, wholesome, and decent, which is nice to see in an early Code film. This is a very entertaining, enjoyable film. The acting is excellent. I really enjoyed Claudette Colbert’s performance. I have been exploring her filmography recently, and I really like her acting and style. I haven’t seen her in many 1930s films, so I liked seeing her in this young role. The advertising for this film ballyhooed it as the next great Colbert sensation after her Academy Award-winning film from the previous year, It Happened One Night. I like her a lot better in this movie because she plays more of a Code leading lady. The Oscar-sweeping Clark Gable film was not one of the worst pre-Code films either of the stars made, but it still was pre-Code. This movie really shows how, in a year and a half, Hollywood had made a complete about-face. Melvyn Douglas is very good in this movie, too. For years, I only knew this fine actor as “Cole. Bill Cole. Friend of the family,” from Mr. Blandings Builds His Dream House from 1948. However, since then, I have seen him in many earlier roles and have come to admire his talent and charm as a leading man as well as a hilarious second lead. Edith Fellows is excellent as the monstrous little girl who becomes a civilized child under the guidance of her stepmother. She was very good at playing a brat as well as a lovable lass. The rest of the cast, including Jean Dixon and Raymond Walburn in fine supporting roles, was also very amusing and effective. This movie has some screwball elements with hilarious dialogue and outlandish sight gags in the finale. I really loved the costumes in this movie, especially Claudette Colbert’s. This is a great film for seeing lovely 1930s fashion!

I highly recommend this film to my readers. It is a fun adventure and an interesting view into the 1930s business world. It also offers an important message about the danger of women putting their careers ahead of really being women, as Julia Scott learns and shares with another young businesswoman. One of the most endearing aspects of this movie is the relationship which develops between Julia and her stepdaughter. When Julia visits the Barclay house for the first time, Annabel is chasing a poor poodle around the house, threatening to cut its head off because it bit her, although it really didn’t. She is vicious and absolutely monstrous! However, Julia challenges her intelligence and thus wins her over. By saying that she doesn’t think she can, she gets the little girl to write a song about two of her stuffed toys. Soon, the little girl is proudly playing her ditty with numerous verses on her adorable toy piano, singing sweetly in a lovely young voice. Eventually, the child loves Julia, since she has shown her more love than her doting aunt and her preoccupied father ever have. Julia is a true and wonderful mother to her. This is a fine monument on this Mother’s Day to all women who give the care and love of motherhood, even if they are not the natural mothers of their children. Love is what makes a mother.

Happy Mother’s Day! If you can’t spend the day with your own mother, why not spend it watching a wonderful Code film with a fine mother? The Code would not have been what is was if it wasn’t for the fine mothers of the men who created and maintained it. Let’s gratefully remember and acknowledge Mary Cunningham Breen, the fine Irish mother who raised Joseph I. Breen with the morals and decency which he used to enforce the Code and make decent films for everyone. In a personal letter from 1934, Mr. Breen wrote, “Whatever formal training I have had, I got entirely from Catholic schools, aided, I am happy to say, by a fine old Irish Mother and an Irish Grandmother.” Here’s to fine mothers and grandmother’s past, present, and future!

Click the above image to start a 30-day free trial of Amazon Prime and watch this movie for free on Prime Video while supporting PEPS through the Amazon Affiliate program! Anyone who makes a purchase today (Sunday, May 12) will receive a free gift in our giveaway!