It is Sunday, so it is time for another article in our weekly Code film series, 52 Code Films. This series is a challenge I devised for myself to ensure that I watch many new movies from the Breen Era (1934-1954) this year. Every time I look at an actor’s filmography, browse a director’s portfolio, skim another blogger’s article archives, or receive a movie suggestion list from Amazon, I realize how many fantastic Code films I haven’t seen yet. I created this series to hold myself to watching at least one new Code film every week and sharing it with my readers in an article. This week’s article will be the last one in the series published in March, since tomorrow is the first day of April. Since this is the thirteenth article in the series, I am now a quarter of the way through the year with this series!

Today’s topic is The Secret Life of Walter Mitty from 1947. This Sam Goldwyn production is a hilarious comedy starring Danny Kaye and Virginia Mayo. This was the third of four pairings between the two actors. I watched this movie on Monday afternoon. We bought the DVD at Barnes and Noble several weeks earlier because my mother recognized the film as one she and my father saw years ago. When I decided to watch a movie that afternoon, I was curious about this film.

A young man works in a menial job in a pulp fiction publishing company. While his mother piles him with chores, his publisher steals his ideas, his fiancée plans their lives, and his future mother-in-law expresses her disapproval with him, he finds solace in vivid daydreams. In these dreams, he sees himself as a series of brave, dashing, romantic heroes in various settings. Whether he’s a daring captain piloting his ship through a tropical storm, a brilliant surgeon, a courageous British fighter pilot, a riverboat gambler from the Old South, a fearless Old West gunslinger, or a famous French hat-maker, the dreamer in always accompanied by the same adoring, blonde beauty. His dangerous daydreams begin to come true when he meets his dream girl on the train into Manhattan and she turns out to be a damsel in distress. She, her uncle, and now the daydreaming editor are in life-threatening danger from a villain called “The Boot,” who will stop at nothing to acquire a black book with information about the whereabouts of priceless Dutch art treasures. Walter struggles to keep his editor, mother, fiancée, future mother-in-law, and annoying rival for his betrothed at bay as he tries to help the mysterious beauty whom he has loved in his dreams for years. Will he be able to muster bravery in his real life? 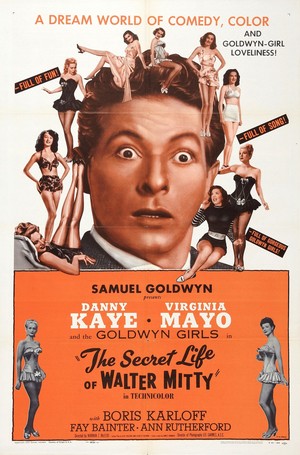 This film was directed by Norman Z. McLeod. It was produced by Samuel Goldwyn. The production company was The Samuel Goldwyn Production Company. The screenplay was written by Ken Englund and Everett Freeman. It was based on the 1939 short story of the same name by James Thurber.

This is a good Code film. I was pleased by the decency of Virginia Mayo’s costumes and numerous characters. Restraint was shown in both the settings and the situations of Walter Mitty’s numerous daydreams. There was great potential for violent and disgusting dialogue and imagery in the pulp fiction publication. However, delicacy and taste was used, and the goriness was held to a minimum. The extremely farcical treatment of the publication’s material prevents the brief dialogue about murder from being disgusting or unacceptable. Boris Karloff plays a frightening assailant of Walter who visits his office pretending to be a doctor with revolutionary ideas for how murders can be committed in the company’s stories. Fortunately, the inventive methods of killing are too bizarre to be feasible or even possible and thus are unlikely to dangerously inspire imitation. The feasible methods of murder which the doctor mentions and tries to execute on Walter, strangling and pushing out a window, are nothing new and thus do not give fresh ideas to those set on homicide. This is a fun, enjoyable, and hilarious film about bravery and dreams coming true.

I really liked this film. I found it to be extremely amusing. Danny Kaye is hilarious as Walter Mitty and every embodiment which his dreams create. I was very impressed by the numerous accents which he effortlessly applies. He is British, Western, Southern, French, German, and plain old American in the course of two hours. I also enjoyed the performance of Virginia Mayo, who likewise acquires different accents during the film. This is the first character I have seen Miss Mayo play whom I really like. The supporting cast is excellent, as well. Boris Karloff is his usual sinister self, Florence Bates and Ann Rutherford are characteristically pesky, and Fay Bainter is unusually cast as a domineering mother. The direction and storyline cleverly combine suspense and comedy. The most enjoyable thing about the film to me is the elaborate dream sequences in various situations and settings throughout the world and history. It is interesting to see how different people and incidents from Walter’s real life appear in these fantasies. The funniest skit in the movie is his impersonation within a dream. When imagining that he is a brave British fighter pilot, Walter’s character elaborately imitates an old German music teacher whom he and some of his comrades remember from college. Danny Kaye is absolutely hilarious as he talks about and sings musical passages and stories in a thick German accent. I expected this movie to be overly goofy, but it wasn’t. I was very happily surprised by how genuinely funny I found it.

I recommend this film to classic movie fans. If you like comedies, you will really enjoy it. However, it isn’t too goofy or slapstick for less ardent comedy fans to enjoy. The suspense elements of the murder and conspiracy plot in which Walter and Rosalind are involved balance the content and prevent it from being mindless silliness. However, it is still lighthearted. Although the characters are in peril. you never seriously fear for their lives. This is one of the best performances which I have seen from these actors. I highly recommend The Secret Life of Walter Mitty to anyone who wants a good laugh. It’s no secret that this movie is a barrel of clean, wholesome fun!