Today is March 10, the end of the tenth week in 2019. As such, it is time for another article in our weekly series about Code films, 52 Code Films. This series is about discovering movies from the Golden Era of Hollywood which I have never seen before. During the Greater Breen Era (1934-1954), over 17,000 Seals of Approval were issued by the Production Code Administration. Some of these were for re-releases of pre-Code films, and others were for American distribution of foreign films. Out of the remaining American products, many Seals went to shorts and cartoons made by the studios. However, the most important Seals were given to feature-length motion pictures from American studios. It’s hard to tell exactly how many such Seals were issued during the Breen Era. As a starting figure, if one estimates that roughly 350 films were released in America each year for these twenty years, 7,000 American films were made during the Breen Era. There could have been more, and there could have been less. I hope to someday calculate a more exact figure. However, whether or not it is entirely accurate, this estimate alone shows how many movies were made during the Breen Era. How many of us have seen 7,000 classic films? I certainly haven’t, but I want to see as many Code films as I can. I designed 52 Code Films to help me explore my favorite Hollywood period. Every week this year, I have committed to watching at least one Breen Era film which I have never seen before. So far, I have watched twenty-three new Code films and have reviewed nine. This promises to be a rich year of film-watching!

This week’s topic is a comedy from 1950, Three Husbands, which stars six actors playing three married couples whose lives are enlivened by friendship with a playboy Englishman played by Emlyn Williams. We watched this movie yesterday for free on a classic film channel on Roku. Because of our trip to Arizona this week, I wasn’t able to watch a new Code film earlier in the week. However, yesterday I had the pleasure of seeing this film.

A recently-deceased British playboy arrives in heaven. When offered fulfillment of one request, he asks to see his best friends back on earth, three married couples, for twenty-four hours. His wish is granted, and we see these six people. The three husbands, the deceased’s poker buddies, are called separately to his lawyer’s office. Each receives a private letter from his late friend, in which he confesses that he was having an affair with each man’s wife. Each man reacts differently to the startling news. The first husband recalls his wife’s weekly trips to the symphony with their British friend, wondering if their mutual love went beyond music. The second husband remembers that his wife was the departed’s nurse, who lovingly tended him during and after his multiple heart attacks. The third husband, who was the playboy’s bookie, views the whole situation as a joke until his wife, who received horse tips and caring refinement from their late friend, reminds him how they became social companions of the sophisticated Englishman only after he met her. The three husbands are filled with doubt, suspicion, and hard feelings toward their wives and their deceased friend. Can the suave British playboy break up his friends’ marriages from beyond the grave, or will the couples’ love endure the trial?

This movie was directed by Irving Reis. It was produced by I. G. Goldsmith with associate producer Anthony Z. Landi. The production studio was Gloria Productions Inc. The film was distributed by United Artists. The screenplay was by Vera Caspary and Edward Eliscu, based on a story by Vera Caspary.

This is a good Code film. It is free from objectionable qualities. I appreciated the good way that the potentially-risqué situations were handled. With all three husbands, we saw only the top part of the letter from Max. We saw the words, “your wife and I,” but the rest of the letter was below the camera’s view. The men’s reactions clearly imply the rest of the sentence. However, it is never shown or read aloud. The letters’ message is only expressed once. One of the wives tells the others that her husband’s letter said she was in love with Max, a very delicate way to phrase the implication. This movie has a good view of marriage and a delicate treatment of implied infidelity. Ultimately, it shows the importance of trust and fidelity in matrimony. This movie shows that mature topics could be handled delicately and properly under the Code if films were self-regulated properly.

I think that this is a really good movie. It is amusing, witty, and unusual. It is part of that select group of Code films which fancifully depict the afterlife. The view of heaven is very subtle, reverently depicted, and not too strong in any religious aspect. Once the action gets down to earth, there is a lot of good acting, clever scripting, and comical situations. I saw a lot of familiar faces in the cast, such as Eve Arden, Ruth Warrick, and Shepperd Strudwick, as well as unfamiliar actors, such as Vanessa Brown, Robert Karnes, and Louise Erickson. I enjoyed Emlyn Williams’s performance as Max. I have never seen him before, but I found him to be a charming, witty, and very effective British actor. I thought that the film also had a good message about marriage. This is a really good 1950s movie; it shows that the Code was still strong by this decade. 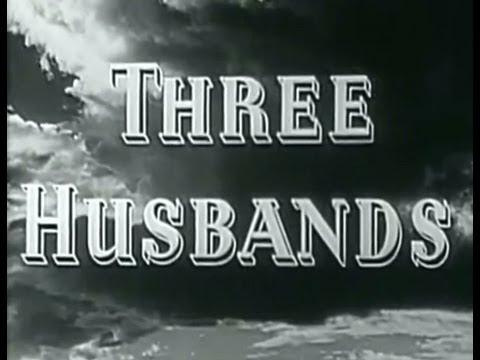 I recommend this film to my readers. It is very entertaining. It has surprising twists and interesting turns. The actors are very good in their respective roles. This movie and its characters do a good job of keeping the viewers guessing about exactly what happened between Max and his three friends’ wives. The production company is small and unassuming in name, but that doesn’t mean that the film isn’t filled with worthwhile, meaningful content from reputable, respected artists. I recommend this film to classic film fans who are interested in seeing a fascinating story about the doubt which people can plant even after their death. Watching this movie is an enjoyable way to spend an hour and eighteen minutes!