Today is the last day of the third week in the new year. As such, it is time for the third article in our 2019 series, 52 Code Films. As I have in the first two weeks and I shall in the remaining forty-nine weeks of the year, I watched a new film from the Breen Era (1934-1954). One might ask how a movie made sixty-five or more years ago can be new. When I refer to a new film, I mean a movie which I have never seen before. Thus, it is as new to me as if it were released last week. I am enjoying discovering more wonderful films from the Golden Era of Hollywood, when the Motion Picture Production Code was enforced. So far, I have watched twelve new Code films this year!

Today, I am going to write about a movie which I watched on Wednesday, And So They Were Married. This film was made in 1936 by Columbia Pictures. It stars Mary Astor, Melvyn Douglas, Edith Fellows, and Jackie Moran. It is included for no cost with our Amazon Prime subscription. This film is one of many obscure gems which are free on Amazon Video. If you are not a Prime member, you may enjoy signing up to find many great films on demand and to receive free shipping when you buy movies on DVD! Click on the link below to start a free one-month trial with Amazon Prime. PEPS will receive a commission even if you cancel after the free trial! 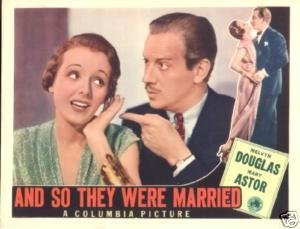 A woman and her nine-year-old daughter go to a mountain resort to enjoy Christmas in a snowy atmosphere. When driving on the snowy roads, the two women become annoyed with a male driver who is in their way. When they arrive at the resort, they are dismayed to discover that an avalanche completely blocked the road just minutes after their passage! Although they are glad to be safe, they are unhappy to learn that only they and one other car were able to reach the resort before the avalanche. Thus, there will be no other guests for the lodge’s grand opening, which is likely to be very dull. They are further exasperated when they realize that their only fellow lodger is the gentleman who annoyed them so greatly on the road. The two ladies anticipate a very reclusive stay until the road is cleared in a few days. The woman is a loving and devoted mother who is concerned about her daughter’s antipathy toward the opposite sex and fears that she herself has bred it. Since she is divorced, she is somewhat hostile toward men, and her daughter shares this feeling, not having enough males in her life. Minutes after they have gone to their suite, the mother realizes that her daughter is getting a cold. When the little girl is bed-ridden, her mother goes downstairs to occupy herself in the lobby. Neither she nor the gentleman, who was offended by the girl’s rude behavior toward him earlier, is eager to make the other’s acquaintance, so they completely ignore each other. However, they don’t have to remain in solitude for long. The man is soon accosted by the over-zealous and incredibly talkative host, an activity leader who is much too eager to keep him company. The lady is similarly befriended by the annoying hostess, who is just as persistent and annoying as the man. Desperate to evade the irritating twosome, the two guests pretend to have a date to take a walk together. Although their romantic interest is initially feigned, they befriend each other during the wintry walk. They exchange ideas on parenthood. The man tells his new friend that he is soon to be joined by his ten-year-old son. As a widower, he is concerned about his son’s growing resentment toward females. The two hope that their children may enjoy each other’s company. When the son does arrive, he and the daughter begin fighting before their parents have even introduced them. The two children soon prove to be bitter enemies who are disgusted to realize that their parents are romantically interested in each other.  As the parents become more and more friendly, the children make a pact to break up the romance, since it could lead to a dreaded merger of the two families. Their misguided and ill-fated attempts to prove their hatred for each other have hilarious results. Will the parents’ romance survive their children’s sabotage? The two children may realize that they are enjoying plotting together and that their hostility toward each other is just an act. 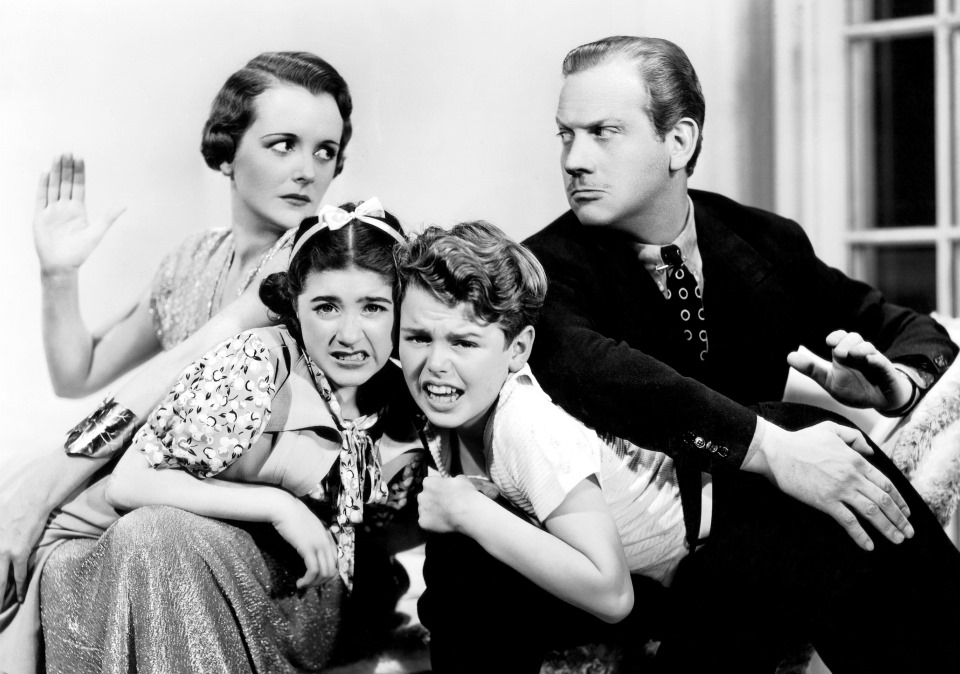 This film was directed by Elliott Nugent. It was produced by B. P. Schulberg. The screenplay was written by Doris Anderson, Joseph Anthony, and A. Laurie Brazee. It was from a story by Sarah Addington. 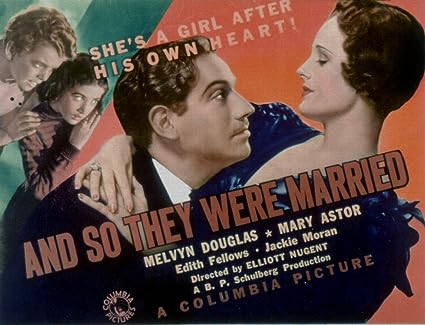 This is a poor Code film. It is of the most irritating kind. There are no surface problems. To mindlessly watch the film, one gets the feeling that it is a good Code film. It is wholesome, decent, entertaining, and light-hearted. There are neither risqué costumes nor unsuitable dialogue. However, one core problem lowers its classification two levels. Mrs. Farnham is a divorced woman, yet she courts and plans to marry another man. Although divorce and remarriage are not forbidden in plain speech in the Code, they are against the spirit of the document, which demands the preservation of the home and the upholding of marriage. To show a mother be contentedly divorced and imply that she is better off with a man other than her original husband is detrimental to the holy state of matrimony. You see more films with instances of divorce and remarriage in the earlier 1930s, I have found. This is largely because filmmakers were still getting accustomed to the Code. In addition, divorce was more publicly accepted because of the looseness during the 1920s and the early 30s. The carefree immorality took a few years to wear off and give way to a long era of decency. However, throughout the Code years, one will find occasional films featuring divorce and remarriage. Again, this is because of the failure of the Code’s original authors to clearly state that divorce and remarriage should not be depicted and condoned when involving the film’s primary characters. The leading lady easily could have been a widow who is embittered because she married a foolish, selfish man who died in a reckless accident. Perhaps he was some sort of dare-devil or thrill-seeker who didn’t care enough about his wife and daughter to keep himself alive. That could have prejudiced her and her daughter against men. Anyway, And So They Were Married is a fine film on the whole. It is a shame that Mary Astor’s character is a divorcee, since that necessitates a classification of poor. 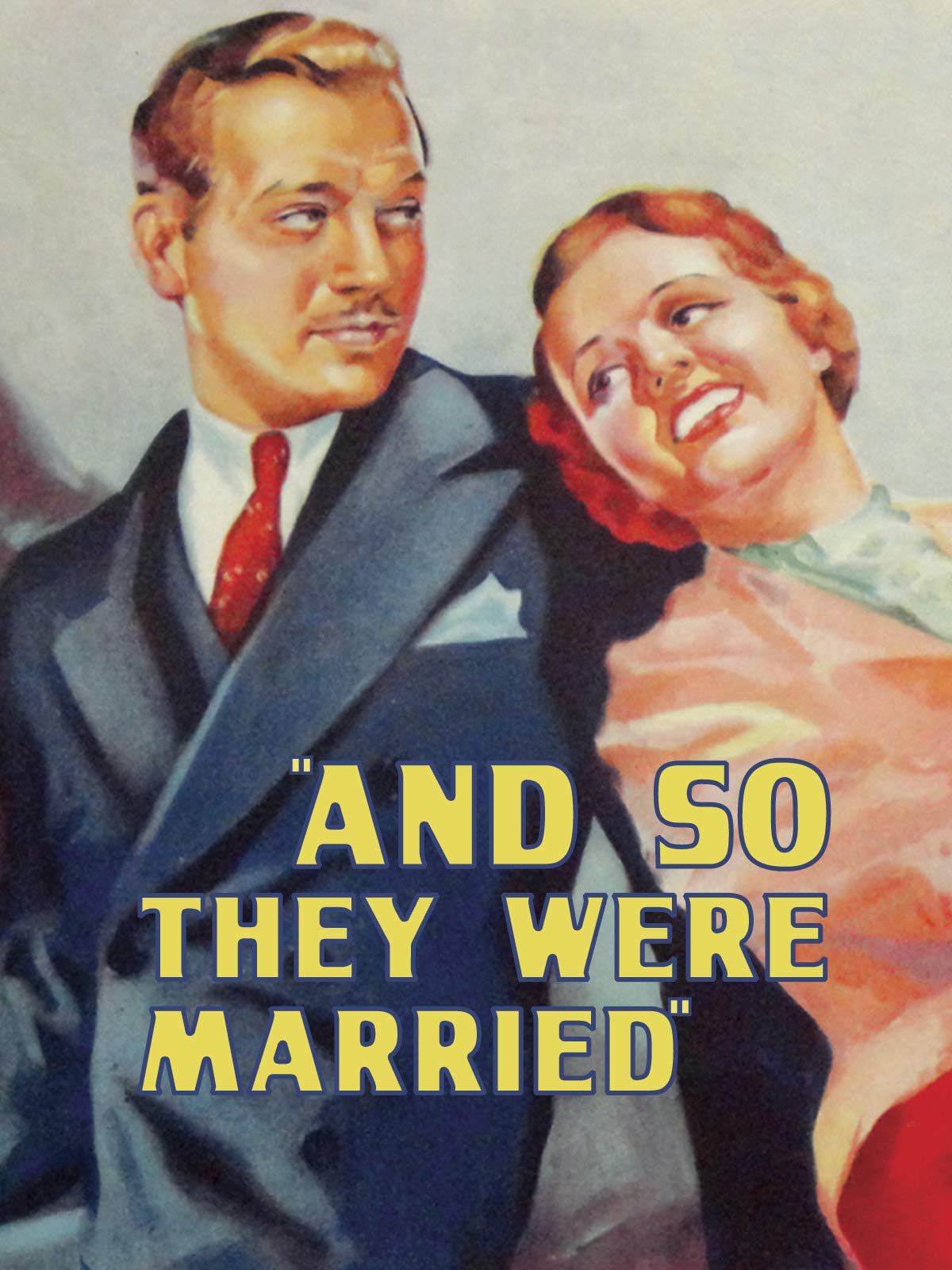 Aside from the divorce element, I really liked this film. I thought that it was charming, clever, and absolutely hilarious. I thought that the acting was excellent. I really liked the child actors. I thought that their scheming and plotting was cute and amusing. The distinct 1930s-style is very endearing to me. The character actors are a strong support for the story. I thought that the concept of the film was very original. This is a rather short film, but it is well-developed and very complex. The footage of the snowy locations is very beautiful and most appropriate for January. Mary Astor looks beautiful in this film, and she is a charming character. Melvyn Douglas plays a charming and humorous gentleman. I think that Edith Fellows gives an excellent performance as the daughter, and Jackie Moran is very good as the son. The physical comedy and comical dialogue are really the best parts of the film. They are amusing, but they are not goofy or over the top. They are just genuinely funny.

I highly recommend this film. If one is going to watch a poor Code film, he couldn’t find many more decent ones. There is nothing in this film to offend sensibilities, style-wise. I think that classic film fans will find this film very enjoyable. It is an interesting low-profile film which is filled with recognizable actors of great acclaim. Although this is not a famous film, audience members will enjoy seeing famous actors like Mary Astor and Melvyn Douglas in it. They both do wonderful jobs of creating unique characters. This is a charming little film. However, I encourage my readers to keep the unpleasantness of divorce in mind. I implore you to consider how the film would have been different and perhaps better if both principle characters were widowed. It wouldn’t have been very different at all in terms of dialogue, but it would have been a good Code film. Then, there would have been no possibility of anyone’s being offended.

This week, I watched two extra new Code films, They Made Me a Criminal from 1939 and It Started with Eve from 1941, which I will review some other time.