Today I am publishing my second article in our weekly series about new Code films, 52 Code Films. As I shall in every week this year, I watched a new Code film this week so that I could review it in an article. This week, I didn’t publish an article in the weekly series about un-Code films, Breening Thursdays. I fully intended to publish article #13 this week; I began working on it on Monday. However, I found that the breening was so in-depth and detailed that I wasn’t able to complete it by Thursday. Thus, I will publish the finished article on the 17th. Although it will just discuss one film, I guarantee that it will have enough words for at least two articles!

In the meantime, I wanted to ensure that Week #2’s article in 52 Code Films was published without fail. This week’s topic is The Barkleys of Broadway from 1949. I watched this movie on Monday. It was on a VHS which has been in our film collection for years. I don’t remember ever watching it before, so it was a new Code film to me. I decided to use this charming musical as my film topic for this week’s article.

A married couple is a hit musical team on Broadway. When the film opens, it is opening night of their most successful musical yet. They are very friendly and affectionate at the curtain speech, but their best friend, a wise-cracking pianist, knows it is only a matter of time until they start arguing again. They begin a fight in the taxi when the husband tells his wife how she could have improved one aspect of her performance. They make up at the celebratory party that evening. While the husband is waiting for his wife on the snowy terrace, she meets a famous French playwright and director. He insults their musical show but says that she has the potential to be a great dramatic actress. When her husband finally comes in, he is jealous of the sly Frenchman. Back home, the husband tells his wife that he made her everything she is; she resents the Svengali role he claims in her success. However, they soon are lovingly reconciled. Nonetheless, trouble is brewing. The wife is jealous of the Southern flirt who is her understudy in the show, and they keep running into the pompous French director. At a party in the country, the Frenchman tells the wife about his new play, which is about Sarah Bernhardt’s youth. She is flattered when he says that she is the only woman he can see in the role. When her husband finds out that she wants to play this role, they have a big fight. Convinced that the Frenchman appreciates her more than her husband, the headstrong actress leaves her husband. Now separated, the husband continues in the musical with the understudy while his wife struggles to do her first serious part. When he realizes how little the French director is helping his wife, the husband begins telephoning her, using a French accent to convince her that the man advising her is the French playwright. She responds brilliantly to his advice, but is he doing himself any favors? He may be helping the woman he loves to find success and love without him. 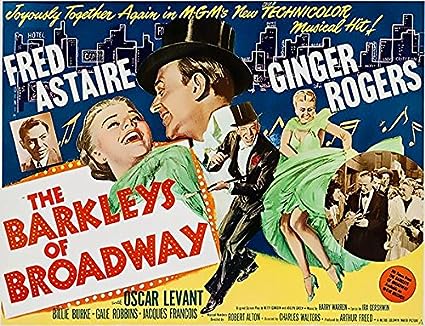 This film was directed by Charles Walters. It was produced by Arthur Freed with associate producer Roger Edens. The original screenplay was written by Betty Comden and Adolph Green. The film was nominated for an Academy Award for Best Color Cinematography for Harry Stradling Sr. It was also nominated for a Writers Guild of America Award for Best Written American Musical for Miss Comden and Mr. Green.

This is a good Code film. It is free from objection. It has clean, witty dialogue. It has a good, wholesome depiction of marriage. The costumes are decent and beautiful. The dancing is graceful and lovely while being completely acceptable. The song lyrics are clever without being risqué. There is nothing objectionable about this film. However, it doesn’t have that little something extra which would make it a perfect Code film. It is not especially inspiring, nor does it handle any particularly difficult topics. However, that does not mean that it is any less Code-compliant than a perfect Code film, such as the film I reviewed last week, Since You Went Away. It is just a good, fun, carefree film. It has no problems. It is in complete compliance with the Code. In addition, it is extremely entertaining. What more can you want in a film?

This is a lovely movie. I think it is so wonderful that Fred Astaire and Ginger Rogers made one more movie together after their run of nine films in the 1930s. So many wonderful movie couples thought about reuniting but never did. I am glad that this sensational dancing duo did rejoin for a final collaboration. This film’s plot is ironically reminiscent of the couple’s parting of ways in their real film careers. In 1939, they made their ninth film together, The Story of Vernon and Irene Castle. By that point, Ginger Rogers felt that she wanted to explore her own abilities as a dramatic actress. She wanted to be more than a song and dance girl, so their partnership ended. Fred Astaire continued making musicals, while Miss Rogers focused more on nonmusical films. In this film, their dancing looks as glorious as ever, if not more so. They were such a harmonious pair. They even do a synchronized tap dance, which is a rare treat. They usually did ballroom dancing together, but they both were also excellent tap dancers. This is the only color film they made together; it is also their only collaboration which is not from RKO Radio Pictures, having been made by MGM. I loved the fact that they included a song from a previous film of theirs, “They Can’t Take That Away from Me” by the Gershwin brothers, which was debuted in Shall We Dance from 1937. I have always loved that song, and it was very lovely as a dance duet in this film. It gave the scene a beautiful, reminiscent quality. As a final note, I appreciated the fact that Oscar Levant got to play Tchaikovsky’s Piano Concerto No. 1. Although it was significantly cut, he got to play a good deal of it, showcasing his great musical talent as well as a beautiful classical piece. I love the harmonious blending of classical and jazz music which one finds during the Code Era of Hollywood.

I heartily recommend this film to all movie lovers. It will especially be appreciated by those who love musicals. I have now seen all but one pairing of Fred Astaire and Ginger Rogers, Swing Time from 1936, and this is one of my favorites of their nine films which I have seen. It has a beautiful, romantic story, a strong, amusing script, lovely songs, fantastic dance numbers, and a great cast. Oscar Levant’s role as a sarcastic sidekick adds a lot to the depth to the picture. Those who love this duo will enjoy seeing them together again, just as good as ever, in glorious Technicolor. They will also enjoy seeing Ginger Rogers in moments of drama as well as lovely musical scenes. In addition, Fred Astaire does a very convincing and amusing French accent when impersonating Jacques Barredout. If you want to see a lighthearted, carefree, and spirit-lifting movie, look for The Barkleys of Broadway. It’s a barrel of fun, sealed with the blessing of being a good Code film!

This week, I watched one extra new Code film, Once Upon a Time from 1944, which I will review some other time.