Today is Thursday, so it is time for another Breening Thursday article! I, Tiffany Brannan, will be writing today’s article. This week, I’m going to breen a film from the Shurlock Era (1955-1968). Today’s film choice is not a very inappropriate film. In fact, it is one of the cleaner movies made in 1959, a year which distinguished itself with controversial films such as Some Like It Hot. Although today’s topic is nothing like Billy Wilder’s infamous comedy in terms of suggestive, it does have music in it, and it begins during Prohibition in the 1920s. My film choice is The Five Pennies, the movie which is loosely based on the life of Red Nichols and stars Danny Kaye in the part. 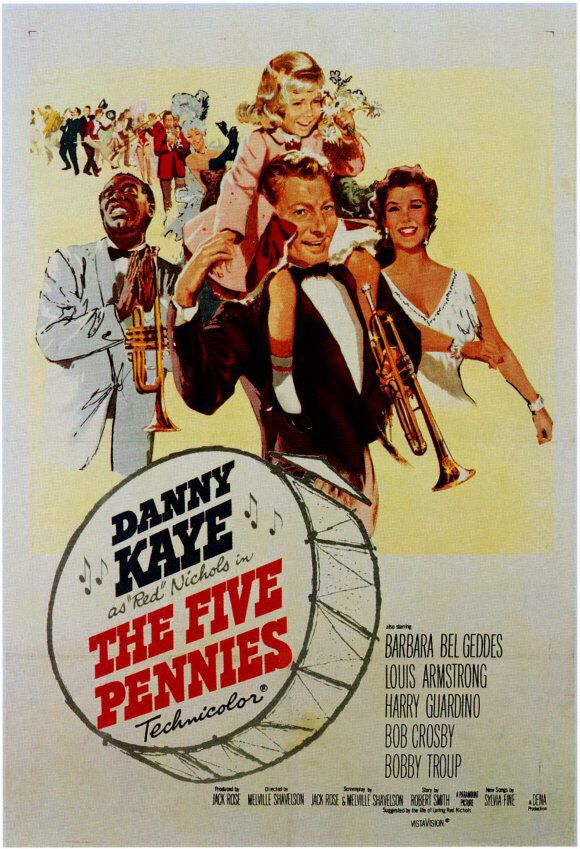 The movie opens when Lorring “Red” Nichols, a brilliant cornet player from Utah, arrives in New York City. He is starting a new job with Wil Paradise, a rude, pompous bandleader who makes working in his band anything but paradise. Red is befriended by a saxophone player named Tony Valani, an Italian ladies’ man who takes him out on a double date his first night in town. The two showgirls make fun of the simple country boy, who acts like a real hick to perpetuate their ideas of him. The foursome goes to a speakeasy, where Red’s date, Willa “Bobby” Stutsman, gets him very drunk on bootleg liquor. When he makes a fool of himself trying to play the cornet onstage with Louis Armstrong, Bobby feels bad. Once Red has recovered from the alcohol’s nauseous effects, he and Willa make friends. She asks him to take her home, but first he has to prove that he really can play the cornet. He plays a spectacular duet with Louis Armstrong, impressing the whole club. In the cab to her house, they exchange life stories and “spoon.” They are falling in love. The next thing you know, they are married. On their wedding night, Red hokes up a number with Wil Paradise’s band, much to the consternation of his bride, who is now the band’s singer.  Afterwards, instead of apologizing, he quits their jobs. Willa is furious, but she soon remembers that she loves his craziness. After that, Red works a succession of odd jobs on the radio, which he invariably quits because of his restlessness and dissatisfaction with them. He is determined to make his Dixieland arrangements famous. Eventually, some of his musician friends agree to take a look at his work. The musicians, who are future stars as Glenn Miller, Jimmy Dorsey, and Artie Shaw, agree to form a band, Red Nichols and The Five Pennies, which they take on the road with Willa as their singer. They are a big hit! Willa soon tells Red that she is going to have a baby. When a beautiful baby girl is born, Willa tells Red that she doesn’t want little Dorothy to change anything for them. She wants him to do what he loves, so she and the baby join him on the road. The band loves their surrogate daughter, and Dorothy grows to be a music-loving five year old. The only problem is that her mother thinks that being on the road isn’t a good life for a little girl. Red has a contract for another ten months on the road, after which he can settle down with a steady job and have a home for his wife and daughter. In the meantime, Willa insists that they do something. Red suggests that they send Dorothy to a boarding school temporarily. The loving parents mean well, but Dorothy is devastated to be torn from them. The band tours the country, growing more and more popular, while Dorothy is alone in school. Disaster strikes on Christmas, when Dorothy is alone at school with two teachers, her parents having to work. Sadly, she goes outside in the pouring rain, where she pathetically swings. Her mother suddenly pulls up in the taxi, but she is a little late. Dorothy has already contracted polio. Her father is stricken with remorse. He gives up his band, buys a house in California, and goes to work in a wartime shipyard to help Dorothy recover. They effectively start a new life for themselves, and his music career fades into the past. His old musician friends become stars as he is forgotten. Will his great music always be in his past? Watch the movie to find out!

Loring “Red” Nichols is played by Danny Kaye. All his cornet playing was overdubbed by the real Red Nichols himself. Willa (Bobby) Nichols nee Stutsman is played by Barbara Bel Geddes. The inimitable Louis Armstrong plays himself, adding his music and personality to the story. Tony Valani is played by Harry Guardino. Wil Paradise is played by Bob Crosby. Dorothy Nichols is played by Susan Gordon when a little girl and Tuesday Weld when a young woman.

With no further ado, let the breening begin! 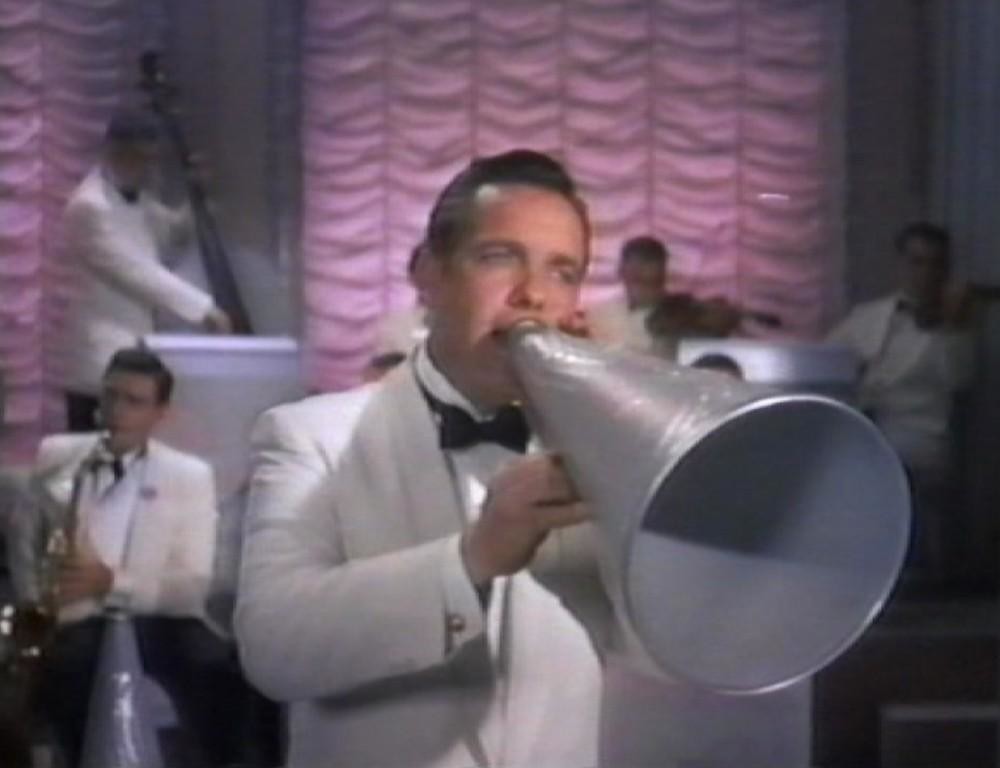 When Red arrives in New York, he goes to his first band rehearsal with Wil Paradise. In reference to the band’s playing, Wil says, “That was pretty lousy.” The italicized word is a forbidden expression under the Code. Instead, he should say rotten or crummy.

That evening, Tony convinces the reluctant Red to go on a double date. He says, “You may not even have to get out of the car.” This is too suggestive of bad romantic behavior, which was closely linked to automobiles in the 1920s. The line should be removed. 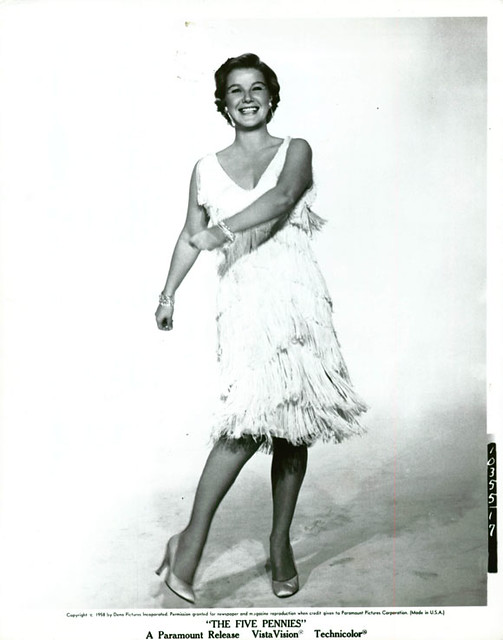 In the scene in the nightclub, the neckline of Willa’s dress is too low. It should be raised slightly.

After Red makes a fool of himself onstage while drunkenly challenging Louis Armstrong, he becomes rather ill. He staggers off the stage, presumably going to the men’s room. Next, he is seen coming out of a room with a “GENTS” sign on the door. He wipes his mouth with his handkerchief before being greeted by a concerned Willa. It was considered distasteful by many to show a sign on the door of a restroom. Also, his wiping his mouth makes the details of his illness a little too pointed. Red should just be seen walking wearily toward Willa in the corridor.

That evening, Red and Willa drive to her mother’s home in a cab. They are obviously falling in love. They talk about their families. During the ride, they kiss quite passionately. A lot of the kissing is done by Willa, since Red is trying to recount his early musical career. The kissing is rather excessive and too passionate. In addition, it doesn’t seem fitting for this couple. Willa is a nice girl who lives with her mother in Brooklyn, and Red is a decent young man who plans marriage on this first date. The kissing and “petting,” as it was called at the time,  should be toned done. More restrained affection would reflect the morals of the characters more accurately.

When The Five Pennies are on tour, some people are shown doing the Charleston. There is some unacceptable focus on women’s shaking posteriors. These should be cut; the shots should just show general dancing.

In the last scene, Tony tells Red that he’s the luckier man because of his devoted wife and daughter. The Italian playboy admits that he has always envied Red, saying that he wouldn’t trade Red’s family “for all the willing waitresses in Hoboken.” That line is very suggestive. Instead, he should say something like, “I wouldn’t trade them for all the freedom I’ve had all these years.”

That concludes my breening! This is a really decent, charming, and wholesome film. These few little changes I have suggested wouldn’t have fundamentally changed the film, but they would have eliminated the few potentially-offensive elements which are in the movie now. I highly recommend this movie to my readers. It is a wonderful picture in terms of entertainment as well as a charming tribute to a magnificent musician. While you are watching it, notice the few things which I suggested removing and ask yourself if the film would be lacking without them. These problems are small, but decay starts in small places.