This article was written by James Brannan, the president of PEPS, as part of the weekly series, Breening Thursdays.

Why breen a film? Why not leave a film made outside the Breen Era alone? When I see a film either from the Pre-Code era or the Post-Code Era, two questions come to mind regarding the acceptability of the film from a Code standpoint. Question number one: What harm are a few Code violations in a wonderful and amusing film such as this? Question number two: Would this film be less wonderful and amusing if the problem areas were altered or removed? Let us look at one such film and see if these two questions can be answered. 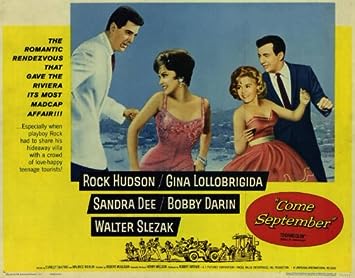 Come September is a 1961 film starring Rock Hudson, Gina Lollobrigida, Bobby Darin, and Sandra Dee. My family and I enjoy this film and watch it at least once a year. Even before my daughter Tiffany brought the Code and Mr. Breen to my attention, there were elements of this film that offended my sense of decency, but I just put them aside and enjoyed the film. I would like to bring you through this picture and point out these problems and discuss how they could have been altered or removed and whether this would have destroyed the film from an artistic standpoint.

Right from the start there is trouble with this film. Wealthy business tycoon Robert Talbot owns a luxurious villa in Italy, where each September he entertains a beautiful Italian woman, Lisa. There are a butler and several servants on staff at the mansion, so the couple wouldn’t be considered unchaperoned. Although the two have separate rooms, the situation becomes a problem on the first evening when Talbot is waiting in his room for Lisa with a bottle of champagne. She is dressed in a very revealing negligee, so there is no doubt that hanky panky is in store for the two. However, I am getting ahead of myself because the whole situation is altered in the story this particular year. Mr. Talbot arrives a month early only to find that his butler (Walter Slezak) is using the villa as a AAA-rated hotel, La Dolce Vista, in his absence, and this has been going on for six years! Talbot’s unexpected arrival catches the butler unawares, and he is unable to avoid being caught in his scheme. He talks his employer into allowing the current “hotel” guests to stay until check-out time the next day. To the romantic couple’s chagrin, the guests are a group of young American coeds chaperoned by Margaret Allison (Brenda De Banzie), their prudish, middle-aged teacher who treats Lisa like one of her own students, keeping a leery eye on her comings and goings throughout the villa.

The amorous couple’s first evening plans are shattered when Miss Allison catches Lisa approaching Robert’s room and stares at her with a look of shame and disapproval. Seeing the situation is hopeless, Lisa goes to her room and forgets about the rendezvous. The plot thickens as a group of young American boys on tour themselves arrive to fulfill their own reservations at La Dolce Vista. Ironically, Talbot had come across the young men on the road to the villa the day before and distrusted them from the start. He suddenly becomes protective of the coeds as the young men begin to show a romantic interest in them. Lisa is surprised at this “moral” side of Robert, which was heretofore hidden. It slowly dawns on her that she is getting a bad deal because he doesn’t protect her virtue and has never mentioned the idea of marriage. She also realizes that her own loose behavior has allowed this to continue, so she decides to play hard to get and ultimately demand a proposal.

As you can see from my brief overview of Come September, this film is a barrel of laughs. The post-Breen era or Shurlock Era was full of good ideas and talented writers, producers, and directors. Unfortunately, without the careful guidelines of the Code, these folks tended to include risque ideas, behavior, and costumes, ultimately spoiling otherwise good films for whole families to enjoy. Come September could have been a good whole family film if it had been under the care and nurture of a good guardian like Joseph Breen and his staff of self-regulators. I will now suggest the breening ideas that, if implemented, might have rendered this wonderful film completely family friendly.

On its face, the idea of a man and a woman meeting romantically outside of matrimony is not necessarily immoral. The problem often lies in the nature of the meeting, who else is present, and so forth. The idea of Robert Talbot entertaining Lisa each September at his villa would be acceptable if there were other elements present. For example, in the 1957 film Love in the Afternoon, there is a similar situation with Gary Cooper and Audrey Hepburn when they meet in his suite at the Ritz. The difference is that a group of Gypsy musicians are always present while they are together in the room, eliminating the possibility of blatant immorality. Billy Wilder, known for naughtiness when given the opportunity, was still directing in a codish fashion in this film. A few years later, in 1959, he went wild with Some Like it Hot. But, I digress. In Come September, to eliminate the possibility of Robert and Lisa committing adultery, perhaps a piano player or another couple could be present. Of course, it would have to be shown that they both retire to individual, separate suites each evening, and the constant presence of live-in staff is mandatory. Now, at this point one might ask, where is the intrigue? And this is where Joseph Breen’s writing skills were vital in saving films while keeping them “reasonably acceptable to reasonable people,” as he often put it.

Instead of attempting the private rendezvous in Robert’s suite, the two could meet for dining and dancing in a private ballroom. Lisa would be wearing a lovely gown, which is not low cut but displays her lovely figure more closely than might be acceptable to a strict school marm like Margaret Allison. Miss Allison could be lurking in the corridor as the two are trying to meet for their romantic evenings.

There are other scenarios in the film that need attention, as well.

When Tony (Bobby Darin) comments to Sandy (Sandra Dee) how remarkably well Lisa’s two hundred and six bones are put together, Sandy asks Tony how well her bones are arranged. Instead of a simple yes or no answer, he slowly examines various parts of her anatomy, nothing blatantly inappropriate, but there are innuendos. This should be removed.

At a night club where the whole group is dancing, Robert Talbot and Lisa do a very suggestive dance with jerky motions. This should be changed.

At the night club, Tony sings the song “Multiplication,” which is loaded with inappropriate lyrics. He could have sung “Beyond the Sea,” a great song he recorded in 1959.

All the kissing between Lisa and Robert should be carefully handled to avoid the suggestion of an improper relationship. Some of their kissing scenes are a little too passionate. They must never be prolonged, lustful, open-mouthed, or in a horizontal position.

Lisa wears several costumes which are too low cut or revealing in other ways. Her dresses should be dignified and glamorous but not suggestive.

The important moral message of the film should be that Robert almost loses the woman he loves because he hasn’t been interested in a lasting, committed relationship. He doesn’t want to get serious; he’s immature, and he just wants a little companionship when he’s in Italy. Perhaps the following line could be said by Robert in the scene in which Lisa is leaving the villa: “I never even thought of marriage! It was never that serious between us. We enjoyed good times together, Lisa. Wasn’t that enough? Dining, dancing, champagne on the terrace overlooking the Mediterranean sea. But just in September. It’s like a vacation for one month a year.”

There are many other lines and other scenarios which would need to be changed, but the screenplay writers would have changed them themselves if they made these fundamental changes. 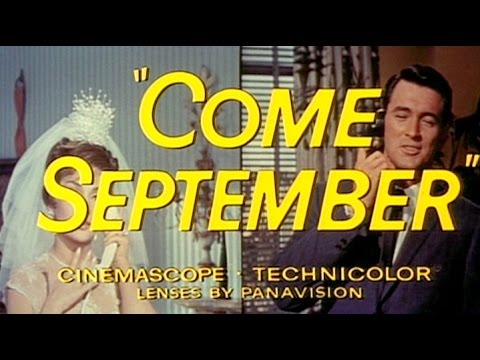 Apart from these few alterations and the change of the foundation of the relationship between the two leads, this is a marvelous film which I recommend you rent or buy. When you watch it, imaging the breening changes I have suggested, and ask yourself if your experience would have been better or worse if they had been applied. Better yet, breen the film yourself. It is loads of fun!

Come back next Thursday for the next Breening Thursday article!