For The Second Annual Great Breening Blogathon, I, Rebekah Brannan, decided to Breen Caesar and Cleopatra, a British picture from 1945 starring Claude Rains and Vivien Leigh. This film features two famous British-American film actors whom England was reclaiming as its own in this film. The film is based on the Bernard Shaw play of the same title and, although it is not entirely historically accurate, features many real historical characters and events. I chose to write about this film mainly because it features one of my favorite actors, Claude Rains. Don’t forget to read about many more great films with him in my upcoming November blogathon, The Claude Rains Blogathon. Now, the lights dim, a hush falls over the theater, and the screen comes to life. Buckle your seatbelts for some breening, because here comes Caesar and Cleopatra! 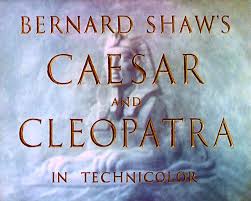 The film follows how Cleopatra, portrayed as a foolish child, is turned into a woman and a queen by Julius Caesar, portrayed as a middle-aged dreamer, during his visit to Egypt. She and Caesar meet by the Sphynx in the desert, and Cleopatra, not knowing who he is, tells him about the horrible Romans who have invaded Egypt, describing them as barbarians with “long noses and ivory tusks, and little tails, and seven arms with a hundred arrows in each” who live “on human flesh.” She also tells him about their chief, Julius Caesar, who had a tiger for a father and a burning mountain for a mother and whose nose is like an elephant’s trunk. He reveals to her that he is a Roman and vows to protect her from Caesar, telling her that the only way to keep from being eaten by him is to show him she’s a woman, since he eats girls but not women. She takes him to her palace in the desert, where he has her arrayed in her royal garments. When Caesar’s troops arrive, they hail him, and Cleopatra is overjoyed that Caesar is only a nice old gentleman and not a terrifying cannibal. He promises to help her overthrow her young brother, Ptolemy, and set her on the throne as the queen of Egypt. Later, Caesar enters Alexandria and interrupts a speech being given by Ptolemy in the palace. Cleopatra soon enters. After Caesar learns that she and Ptolemy are married, as is the custom among Egyptian royalty, he proposes that they rule together. The court is outraged by this suggestion and refuses to accept his advice, in spite of the fact that he has collected the last two years’ taxes from the citizens of Egypt. He later learns, to his grief, that the Egyptians have killed Pompeii, whom he was pursuing when he arrived in Egypt. However, he chooses to forgive them for this and sets all the people in the palace free, although they are rightfully his prisoners. As he fights a war for domination of Egypt with Ptolemy and most of the Egyptians, Caesar continues teaching Cleopatra to be a woman and a queen. Along the way, Cleopatra tells him of a “beautiful” young man who came across the desert and gave her father back his throne several years before, and he informs her that he sent the young man, whose name is Mark Antony. He then promises to send Mark Antony to her when he returns to Rome, since she says she loves him and wants to marry him. From then on, they endure many trials and tribulations together as Cleopatra steadily matures and grows wiser under Caesar’s careful tutorage. To find out if Caesar wins the war and sets Cleopatra on the throne, watch this movie and enjoy! Here’s the link to the free copy on YouTube: https://www.youtube.com/watch?v=UYq3WKEosKE

That concludes my breening of this film. With these changes, the film would be entirely acceptable for all audiences. Also, by eliminating some unnecessary and lengthy scenarios, which were included merely because they were suggestive, the film would be stronger and shorter. It took much more time than it should have to tell the story, and the story itself was weakened by silly, unnecessary scenarios. With all the unnecessary and suggestive scenarios cut out, more time would have to be spent on developing relationships and characters. Thus, even if the film was not shortened, the extra time would be spent on things which were important to the story, thus making the film an exciting two hours, rather than an enjoyable hour and a half with an extra half hour of tedious nonsense. This is just another great example of how the Code made films better. Nine times out of ten, if a Code film is extremely silly and foolish, it is a non-Code film, meaning that it was not self-regulated properly and is not entirely Code-compliant. In conclusion, although the British were not quite as talented at filmmaking as American filmmakers, with the Code to help them, it would have been a much closer tie for supremacy.

Julius Caesar; the Roman Emperor who coaches Cleopatra to be a queen: Played by Claude Rains

Cleopatra; a silly, childish girl whom Caesar teaches to be a queen: Played by Vivien Leigh

Apollodorus; a Sicilian merchant who becomes very friendly with Cleopatra and Caesar: Played by Stewart Granger

Ptolemy; Cleopatra’s brother and rival for the throne: Played by Anthony Harvey