Today is July 19th, another day in #CleanMovieMonth. Every day in July, I am writing about another movie from the Breen Era (1934-1954). I analyze these films in terms of their outline, their cast, their additional information, and, most importantly, their Code-compliance. Through this exercise, I hope that we will all gain a deeper understanding of the Code years, which are called the Golden Era of Hollywood. 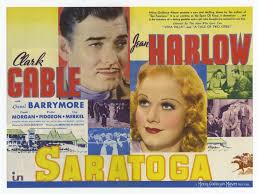 My film choice for today is an MGM film about race horses, their breeders, gamblers, and bookies. Released in 1937, Saratoga is most famous, or rather infamous, for being the film during the making of which Jean Harlow died. However, this film, which also stars Clark Gable and Lionel Barrymore, is a fine film in its own right. Let’s consider it.

Grandpa Clayton is an old horse breeder who has been breeding winners on his family’s farm his whole life. Now, hard times have hit the family, and there are almost no horses left at Brookvale Farms. Duke Bradley, a confident young bookie, is a good friend of Grandpa Clayton, so he tries to help him any way he can. However, Mr. Clayton’s son, Frank, feels they owe Mr. Bradley too much money already. Frank Clayton is a sickly man with a bad heart who has incurred substantial gambling debts. He gives Duke the deed to the farm as a marker for his debts, although the latter is quite unwilling to accept it. Meanwhile, Frank has a daughter, Carol, who has been in Europe culturing herself. When she hears that her father’s health is failing, she hurries back to Saratoga. She is accompanied by her fiancé, Hartley Madison, a Wall Street millionaire who has won a lot of money from Duke at the tracks. Now, Duke sees him as the solution to the Claytons problems. He immediately takes a fancy to Frank’s beautiful daughter, but she is very cold to him. Duke is eager to use her fiancé as a “sucker” off of whom to win a lot of money. During her first day at the tracks, Frank Clayton collapses and dies. After his death, Duke plans to give the deed to the farm to Carol. However, before he can, she comes to him and demands that he sell it to her for a fair price. Her rude attitude annoys him, so he says that she’ll have to pay him a lot to get the farm back. He then accuses her of marrying Mr. Madison for his wealth, since she is talking about spending his money before even marrying him. She angrily vows to earn the money to pay him back herself by handicapping horses throughout the country. Meanwhile, Duke has reunited with an old friend, Fritzi, whom he knew before she was married. Now, she has wed Jesse Kiffmeyer, who manufactures cosmetics as the beauty “queen” Harriet Hale. Mr. Kiffmeyer hates being around the race track, since horses make him sneeze, and he is jealous of Duke’s friendship with his wife. There is nothing wrong between them, but “Miss Hale” is a very suspicious man. As the four of them travel from one race track to another, Carol is kept company by her lovable, life-loving maid, Rosetta, who loves Mr. Bradley. As their time together progresses, Carol’s feelings may be headed in the same direction. However, she detests his constant attempts to get her to bring Hartley to the tracks. Little does she know that he intends to use the money she gives him for the farm to refurbish it and completely restock it with the horses which Grandpa so desperately wants. Can he convince her that his intentions are honorable? Will she see that he has a heart of gold and not just a desire for gold in his heart? Will she realize that Duke, not Hartley, is the right man for her? Watch the movie to find out!

As I stated earlier, this film is most well-known for the fact that Jean Harlow died during its filming. Two-thirds through filming, in May, she collapsed on the set during a scene with Walter Pidgeon. A week later, she died of kidney failure. Some have said that her illness was also related to impacted wisdom teeth and sun poisoning. The film industry and the world was shocked by the sudden death of the beautiful actress at age twenty-seven. Her two co-stars in this film, Clark Gable and Lionel Barrymore, mourned her as family. Mr. Gable had thought of her as a sister, and she was like a daughter to Mr. Barrymore. After the initial shock of her death, the studio considered re-filming her scenes with Jean Arthur or Virginia Bruce. However, public opinion quickly demanded that the film be released with Jean Harlow’s footage. Thus, the remaining scenes were shot with Mary Dees as Miss Harlow’s physical double and Paula Winslowe overdubbing her voice. To camouflage Miss Dees, she was usually shot from the back or with a hat, binoculars, or something else covering her face. The film was released in July. Although audiences noted the sadness of seeing Jean Harlow so soon before her death, the film became MGM’s biggest financial success for this year, since audiences flocked to see Miss Harlow’s last film.

I noticed the times when the double was used. It’s not hard to spot. The first incident is at the race track. The double is remarkably like Jean Harlow, but she is a little thinner. The voice is also very close, but it is a little higher. Mainly, you can spot these scenes because the absence of straight shots is suspicious. In addition, you can hear the odd tone of the overdubbed dialogue. I think they did a very clever job of camouflaging the replacement. Many people criticize the filmmakers’ insensitivity in finishing the film after their actress died. I don’t see it that way. I think the film is a beautiful monument to Jean Harlow’s legacy. Yes, it is very melancholy to see her so close to her death; however, I think she did a wonderful job in spite of her illness. I really enjoyed watching this film.

This film is all about gambling and luck. In the production, all the luck was bad. In addition to Miss Harlow’s illness, the filming had bad luck in another way. On the set, Lionel Barrymore tripped over a lighting cord and re-broke his hip! This, combined with his arthritis, crippled him and confined him to a wheelchair.

I’m not a superstitious person, but this film is generally jinxed. When writing the first draft of this article, I had written about a third of it. Suddenly, the page refreshed, and I lost everything I had written! Later, when I had re-written most of my first draft, the page closed, deleting several sentences! The only lucky thing about this film is the fact that it was the top-earning MGM picture of 1937.

This is a good Code film. It’s quick, witty, and entertaining, yet it’s wholesome and decent, too. Clark Gable and Jean Harlow were a famous team in pre-Code films. This movie, as well as some of their other Code works, shows that they were just as good together in the Breen era. I really like seeing these two wonderful actors in films from the Breen era. In pre-Code films, Miss Harlow is usually such a vamp that I can’t enjoy her performance. Mr. Gable is usually a real cad. I like seeing them play decent characters. They still have a great chemistry and a really good way of working together. However, it’s nice to always see Jean in full-clothing. She looks beautifully in 1930s clothing; there’s no reason for her to model undergarments. This film shows good entertainment of the early Code years. It didn’t take long for Hollywood and America to learn about and love decent entertainment!

Click the above image to buy this movie on a 7-Film Jean Harlow DVD collection at Amazon and support PEPS through the Amazon Affiliate program!