Today is July 14, the end of the second week in #CleanMovieMonth. In addition, it is Bastille Day, the French Independence Day. Plus, it is the second day in Moon in Gemini‘s Winter in July Blogathon. Not only that, it is the day before our debut performance as the L. A. Soprani Sisters, The Story of the Code Through Classical Song at Hollywood and Western! 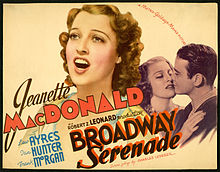 To celebrate these numerous occasions, I am going to write about an MGM musical extravaganza from 1939, Broadway Serenade. As you may guess from the title, it is one of those movies which is about the lives and experiences of Broadway performers. This particular film was made to honor Jeanette MacDonald’s coronation as Queen of the Box Office that year. Her leading man in this film was not her usual musical co-star, Nelson Eddy. Instead, she was paired with Lew Ayres, a young actor who was making quite a name for himself at MGM in the Dr. Kildare series and other films. With a bright musical score and a dramatic love story, this film is a joyous, moving homage to many of Miss MacDonald’s greatest film successes.

Jimmy Seymour and Mary Hale are a musical team. She is a singer, and he is a pianist and composer. They have been a team for years, but they don’t let anyone know that they are married, since married couples get fewer bookings. However, they have a hard time keeping a job as it is because of Jimmy’s jealousy and pugnacity. When the film begins, Mary is singing at a nightclub called the Naughty Nineties. When a drunk hits Mary in the face with a cork, Jimmy promptly punches him and gets fired, since this is his fourth fight in a week. Jimmy is downcast and disgusted with himself. However, Mary isn’t discouraged. She convinces him that great things are going to happen to them, since they have a lot of potential. That evening, they learn that he has received a fellowship for a year of study in Italy. They are thrilled by this good news, but they know that they will need $1000 besides the fellowship money to live for that year. Jimmy plans to sell a song to earn the money. The song is “For Every Lonely Heart,” his own arrangement of Tchaikovsky’s “None but the Lonely Heart” with original English lyrics. Everyone in the boarding house agrees that the song is brilliant, and Jimmy plans to sell it to a Broadway producer. The next day, he and Mary go to the frantic office of a prominent Broadway producer, Cornelius Collier Jr. When there, the show’s backer, an Englishman named Larry Bryant, recognizes them from the night club where he saw them last night. He is infatuated with marry, who he doesn’t know is married. Thus, he convinces Mr. Collier to give them an audition. They try to present the song, but they keep getting interrupted. They never get past the first few lines, and Jimmy gets angrier with every interruption. Finally, the music director, Gene, bursts in and says that the leading lady, Harriet Ingalls, refuses to sing his number properly. Mr. Bryant suggests that Mary should sing the song to demonstrate the proper performance of it, and everyone loves her style. Mr. Collier tells her to come with the show to Atlantic City that afternoon. He makes it very clear that he’s not interested in Jimmy’s song or the team; he just wants Mary. As they pack, Mary assumes that her husband is coming with her. However, he disillusions her by saying that he would die of boredom with nothing to do and that he needs to make a living in New York in case she’s a flop. Although he loves her very deeply, he can’t bear the thought of just being along for the ride. No matter what she says, she can’t convince him to change his mind. Thus, they sadly and romantically part at the train station. As soon as she is out of his arms, Larry sweeps her onto the train. As Mary enjoys a huge success in Atlantic City, Jimmy is playing the piano at a beer garden with Herman, their elderly Viennese cellist friend. Meanwhile, rumors begin to circulate about a romance between Mary and Larry. Can the young couple’s secret marriage withstand their first separation? Does Jimmy love Mary enough to trust her when she is hundreds of miles away? Can Jimmy find success of his own? Watch the movie to find out!

This score features several lovely songs, both new and old. The new songs include “High Flyin’,” which segues into “One Look At You,” a romantic duet which she sings with a young baritone named Kenny Stevens. They also sing “No Time to Argue” in a duet snippet which is very reminiscent of the May Day scene in Maytime. and Jeanette MacDonald sings “Time Changes Everything” with a chorus. Jeanette also sings some songs from her previous films. In a musical montage, she sings “The Italian Street Song” from Naughty Marietta from 1935 and Les Filles de Cadix from Maytime from 1937. She sings two other classical songs for the first time, which are “Musetta’s Waltz” from La Boheme and “Un Bel Di” from Madame Butterfly, which is featured in an elaborate sequence which replicates the opera, complete with Asian costumes, a bridge, a pond, and falling petals.

The big song in this movie is “For Every Lonely Heart,” the adaptation of Tchaikovsky’s famous melody which is supposed to have been written by Jimmy. It is a really beautiful song, and I appreciate the fact that the original song is featured many times throughout the film, as well. Jeanette’s voice sounds excellent in this film. Lew Ayres couldn’t sing with her, although he does break into impromptu singing with Herman a couple of times. However, he was a musician, since he was discovered at nineteen when he was playing the banjo in a band in Hollywood. He plays the piano very well, and this allowed him to be musically active in the film. It’s a great score!

This is a really great movie. I love the fact that it is one of Jeanette MacDonald’s sweetest roles. Unlike in most of her films with Nelson Eddy, she is not the one to hurt the man. He hurts her with his jealousy and mistrust. However, she does a brilliant job of playing a dutiful, loving, and faithful wife who never puts her career above her marriage. She begs Jimmy to come along with her. Their marriage is more important than just success for her. She wants them to be successful together. Without spoiling the ending, I will just say that love conquers all and marriage is maintained, as the Code requires.

This movie begins on Christmas Eve, and it features another Christmas scene later in the film. Like The Shop Around the Corner, the other movie I reviewed for this blogathon, this film features MGM’s magnificent snow. The winter highlight of this movie has to be the “High Flyin'” number. On the stage, Jeanette MacDonald gets off a “train” and arrives in an Alpine ski village. She dances with some fellows in a lovely, white, wintery suit, pretending to ice skate down steps. She makes a quick change to do a brief dance number in the ski lodge’s bar; miniature skiers can be seen through the window. Then, she goes outside, now in a beautiful ski outfit, and sings “One Look at You” with Kenny Stevens, who is also in ski clothes. After their duet, they don their skis and whiz down a mountain, with the wind blowing their hair right on stage! Then, they fall with a crash at the bottom of the hill, their skis broken to bits. They sing one last chorus of “One Look at You” before the sequence ends. It could never really be done on a stage, but it’s wonderful!

I hope you enjoyed this wintery romance. Happy Bastille Day! By the way, if you want to celebrate this French holiday, why not watch Jeanette MacDonald’s next movie, New Moon, which was also directed by Robert Z. Leonard? You can read my review of it for #CleanMovieMonth here. Vive la France!