Today is Thursday, the twelfth day of #CleanMovieMonth at PEPS! We are celebrating the Code era by reviewing a different Breen era movie (1934-1954) every day. Several other authors have been kind enough to share this event and offer to write articles themselves. I would like to thank these people, who include Maddy of Maddy Loves Her Classic Films, Steve of Movie Movie Blog Blog, Ruth of Silver Screenings, Movie Critic of Movies Meet Their Match, Samantha Ellis of Musings of a Classic Film Addict, Debbie of Moon in Gemini, and Rebecca Deniston of Taking Up Room. Check their websites to read the interesting articles which they always write. At the end of July and the beginning of August, I will repost the articles which other people have written for #CleanMovieMonth. It’s not to late to join! Click here to join #CleanMovieMonth yourself if you want to write even one article about Code films and decent entertainment! 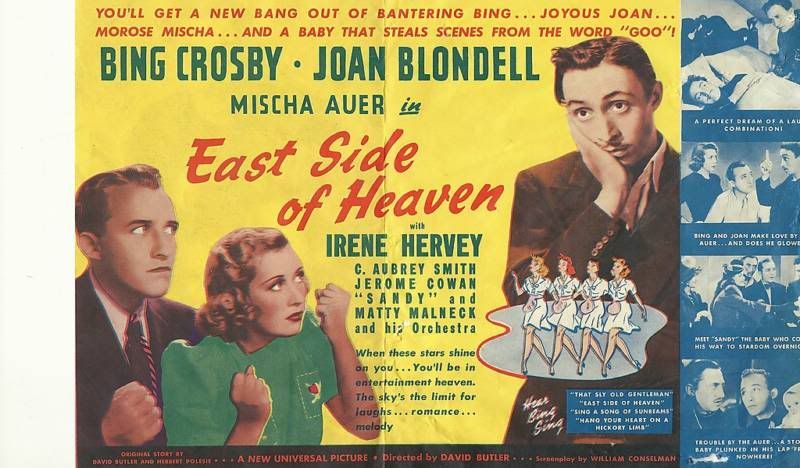 Today I am going to review a really charming movie about a singing cab driver, his switch-board operator fiancée, and an adorable baby he has to hide for a friend. The movie is East Side of Heaven from 1939. This rather anonymously-named film was a movie Bing Crosby made with Joan Blondell while on loan to Universal Pictures. The nondescript title comes from one of the many delightful songs Bing sings. Come along with Bing Crosby as he cruises down the streets of New York with a song in his heart and a baby in the backseat!

Denny Martin sings telephone greetings for the postal union. He and his fiancée, Mary Wilson, a hotel switchboard operator, are all set to get married the next morning. At the end of his work day, a drunken socialite, Cyrus Barrett Jr, comes in and asks him to deliver a birthday message to his father in person. Since the Barretts are very wealthy and influential people, Denny’s employer insists that he go. Little does Denny know that the intoxicated son is just doing this out of spite toward his domineering father, who hates music and especially singers. At the Barrett mansion, Denny recognizes the younger Barrett’s wife as an old friend of his, Mona. He overhears a conversation between her, her father-in-law, and his lawyers. She and Barrett are having a trial separation, but Mona insists that Barrett has been drinking so heavily because of his father’s attempts to run their lives. Mr. Barrett says that he doesn’t care if they get divorced as long as she leaves her baby with him. She refuses to give up her ten-month-old son, saying that she can take care of him best. Denny enters and adamantly agrees with her, much to Mr. Barrett’s chagrin. When the old man demands to know what Denny is doing there, he sings “Happy Birthday” to him and is promptly thrown out. The next day, he and his roommate, a superstitious, unemployed Russian named Nicky, entertain Mary for a pre-nuptial breakfast. Everything seems to be going well until Denny receives a telegram that he has been fired because of his actions at the Barrett home. Thus, their wedding has to be postponed for the fourth time. Mary doesn’t mind too much, since she believes in Denny. You can’t keep a man like Denny Martin down, though. Later that day, he gets a job as the Cruising Troubadour, the goodwill ambassador for the Sunbeam Cab Company. He drives a cab and sings a cheerful song while giving people free rides! One of these people is Mona, who has sneaked her baby out of her father-in-law’s house. She knows that Mr. Barrett is trying to have the child legally removed from her custody, and she can’t find her husband. She desperately asks Denny for advice. He encourages her to leave the baby with some trustworthy person whom Barrett wouldn’t suspect so she can locate her husband at a health farm, where he said he was going to sober up. She thanks him for his advice and goes to a hotel to send a telegram. However, Denny quickly receives word from her that she is leaving the baby with him! Now, he has an adorable baby in his backseat with no idea of where to find his mother. The smiling, laughing baby seems like a lot of trouble, but he knows that the police will return him to his grandfather. Thus, out of his fondness for Mona, he takes the baby home. He and Nicky care for the baby, being very careful to keep his presence secret. However, it may be for longer than Denny expected. Meanwhile, a very conceited radio broadcaster, Claudius De Wolfe, is constantly making a play for Mary. He lives in the hotel where she works, and he never loses a chance to flirt with her or insult Denny on his broadcasts. His sponsor happens to be Cyrus Barrett Sr, so he is very eager to locate the Barrett baby when the papers announce his disappearance. Will he be able to deduce the baby’s location? Will Denny go to jail for trying to help a friend? Will the Barretts ever be able to be a happy family? Will Denny get his chance to sing anywhere besides a taxi? Watch this movie to find out!

Bing Crosby’s voice sounds excellent in this movie. He performs a lot of charming songs. For a while, he doesn’t sing anything except a few musical greetings. The first musical number is “Hang Your Heart on a Hickory Limb.” This number is one of my favorite parts of the movie. It takes place in an adorable diner, Mrs. Kelly’s Frying Pan Café. A circular window, round menus, and even the waitresses’ apron are shaped like frying pans. Denny sings this song to cheer up the depressed, intoxicated younger Cyrus. First he croons the cheerful tune with the accompaniment of a band which Cyrus brought with him. Then, Mrs. Kelly and two female cooks repeat the refrain in a rather operatic contralto trio. Mary does a peppy little dance, and Nicky does a Russian dance. Next, five waitresses sing a jazzy rendition of the melody. They are a singing group called the Music Maids who are in the style of the Andrews Sisters. As if all that isn’t enough, an enthusiastic chef in the circular kitchen at the center of the restaurant takes a rhythmic solo. With a knife and other kitchen utensils, he does a lively percussion solo, banging on everything in sight. I love this number. It’s so imaginative, innovative, and 1930ish. In later times, movies didn’t usually spend so much time on one number. I love the concept of the Frying Pan Café. It’s so charming. If it really existed, I would go once a week!

Whenever he is driving and vocalizing as the Cruising Troubadour, Denny sings “Sing a Song of Sunbeams.” This is a bright, memorable tune which always manages to end when Denny reaches his destination! When he needs to put the baby to sleep on the first night, Denny sings the beautiful theme song. Almost instantly, the baby stops crying. It’s so sweet to see how much that baby loves him and his singing. Later, when Denny sings another lullaby, “That Sly Old Gentleman From Feather Bed Lane,” the baby falls asleep almost instantly.

Baby Sandy is the most adorable, responsive, and talented baby that I have ever seen in a movie. He, or rather she, smiles, laughs, and responds so adorably. Although she can’t talk yet, she acts and responds as much as any other member of the cast. You can’t imagine a happier baby. She adds so much depth and uniqueness to this film. In one scene, Denny is holding her while singing into a microphone. She runs her little hand over the microphone. On the last note, she coos along, and she’s on the right note! She’s very musical.

This is a wonderful Code film which praises the beauty and importance of marriage and having a family. Denny and Mary have such a sweet, wholesome relationship. It’s nice to see Joan Blondell in such a decent role. During her pre-Code years, she seemed to spend more time putting on stockings, posing in her undergarments, and bathing than anything else. She had a really sweet face, though, so she is very convincing as a nice girl. This is the sort of depiction of simple people, courtship, and marriage which our country needs.

If you get a chance, be sure to watch this movie. It is full of wonderful music and great lines. It is amusing, heart-warming, sweet, and uplifting. In addition, it is a family picture which is cleansed and purified by the Code. It is so 1930ish, yet it doesn’t have any of the unfortunate elements in pre-Code films. It has all the wonderful things I love about the 1930s but none of the indecent elements. This is a great Code film. I know you’ll love it too!