Today is the second day of January and the ninth day of “The Twelve Days of Christmas with the Code” here at PEPS. I’ve reviewed eight Christmas classics from the Breen era so far. I have written about some secular movies and some religious pieces. I have reviewed some films that are all about Christmas and some that just have a few holiday scenes. Today, I am going to write about a movie that is entirely dedicated to the most popular secular figure of Christmas, Santa Claus. Today’s film choice is Miracle on 34th Street from 1947, a lighthearted picture which starts on Thanksgiving Day and ends on Christmas. Read along to find out about the miraculous thing which happened on 34th Street during a holiday season over seventy years ago. 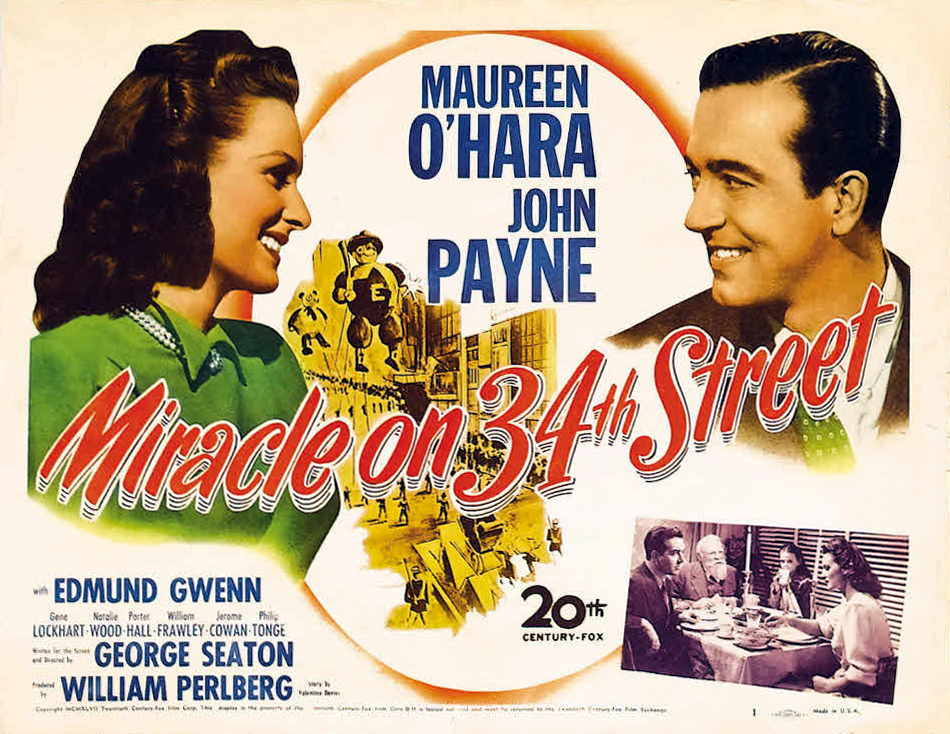 There is excellent acting in this movie. Edmund Gwenn is very believable as Santa Claus. His soft British accent and lovable charm make him a truly authentic Kris Kringle. Maureen O’Hara is sweet and beautiful in her role. She plays Doris very convincingly. John Payne is grand in his role of the determined young lawyer who is eager to make the embittered working woman believe in something again. A very young Natalie Wood is a huge addition to the cast. She is intelligent, cute, sparkly, and charming in her role of Susan. She is filled with the wonder of youth. Her acting is really excellent. She responds very well to Kris Kringle. Maybe that is because she really thought that he was Santa Claus. She believed that he was his part all through the filming of this picture. It wasn’t until she saw him without his costume at the end of shooting party that she realized that he was only an actor.

This movie is filled with warm holiday scenes from beginning to end. There are Christmas songs, holiday decorations, and a lot of focus on Santa Claus. The spirit of generosity which this film shows is one from which we all can learn. Kris says, “Christmas isn’t just a day; it’s a frame of mind.” He wants to make sure that people always have that frame of mind. This story also teaches the important lesson that you must never stop believing in something, since “faith is believing when common sense tells you not to.” Also, Fred displays the sort of determination that really gets things accomplished. Even though it seems impossible to win, he won’t stop fighting for the thing in which he believes. That sort of determination and faith made the Code a success during the Golden Era of Hollywood. If we have that same determination now, we can made the Code a success again!

This movie is a lighthearted picture which will please all sorts of film lovers. Even if you don’t believe in Santa Claus, you have to love Kris Kringle when he is played by Edmund Gwenn. You have to watch the original 1947 version, since the remakes just aren’t the same. As you enjoy these old movies, never forget the miracle in the 34th year of the century which made them what they are. Be sure to look at the seal in the corner of the credits and acknowledge all the hard work which went into the self-regulation of Code films. Without that seal and the hard work behind it, this film, like all Breen films, wouldn’t be the marvelous classic that it is. Come back tomorrow for the tenth day of Christmas with the Code!