Today is the sixth day of “The Twelve Days of Christmas with the Code.” As December 30, it is the second to the last day of 2017. Tomorrow will be New Year’s Eve, and the next day will be the beginning of the new year. As we approach 2018, I am continuing to celebrate Christmas with a new Code Christmas classic each day. Yesterday I informally breened a non-Code film from 1942, The Man Who Came to Dinner. Today, I am back to true Breen films with The Bishop’s Wife from 1947. Please join me in considering this Sam Goldwyn Productions film which is a religious fantasy with Cary Grant, Loretta Young, and David Niven. 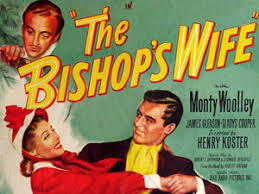 A mysterious stranger (Cary Grant) is seen walking through a bustling town at Christmas time, helping people and saving them from calamities at every turn. He looks on as a beautiful woman, Julia Brougham, buys a Christmas tree and talks with her friend Professor Wutheridge (Monty Woolley). She is a bishop’s wife, but she and Henry are no longer in the happy little neighborhood where the professor lives. Now they live in a bigger house, but they are far from their friends. She sobs on the shoulder of the kind old atheist, who is buying a Christmas tree just because it reminds him of his childhood. Cary Grant watches their tender conversation. After Julia has departed, the stranger purposely walks into the Professor and pretends that he knows him. It is obvious that he is trying to trick the other man into believing that they knew each other in Vienna. However, it is clear that the Professor doesn’t know who he is. When Julia arrives at her home, her husband, Henry (David Niven), is in the middle of a difficult meeting with disagreeable potential donors for the cathedral he is trying to build. Among them is the refined, wealthy widow, Mrs. Hamilton (Gladys Cooper). She is giving him a very hard time because she wants to dictate all the specifications of the cathedral, which she wants to be a monument to her late husband. Henry, however, is firm that the cathedral should be built for all the people, not just one person’s glory. Mrs. Hamilton leaves, saying that the cathedral will be built her way or not at all. After all the people have left, Henry and Julia sit down to dinner. Julia tries to tell Henry that this is harassing him, but he is determined that the cathedral must be built. He apologizes for being short with her and suggests that they go walking tomorrow and have lunch together. She is thrilled. Just as he has begun to eat, his secretary says that a man must speak to him on the telephone. He reluctantly returns to his study, where he learns that he has had some appointments scheduled for tomorrow for months. He is confused and troubled about all the difficulties of raising money to build a cathedral. He walks over to the painting of the future building which hangs over his mantle. He leans on the mantle piece and asks God to help him. As he finishes his prayer, the painting begins to glow. He starts as he sees it illuminate, then he hears a door shut. He turns around and sees no one. When he turns back around, he sees Cary Grant standing in front of the fire place. The guest tells him that his name is Dudley and that he is an angel who has been sent to earth in answer to Henry’s prayer. Henry thinks that he has been working too hard, then he thinks that Dudley is deceiving him. The heavenly messenger tries to convince him that he is what he says he is, but the practical bishop can’t find the faith to believe him. Soon, Julia rushes in, wondering what is keeping Henry. Dudley introduces himself to her, saying that he is Henry’s new assistant. She is overjoyed that Henry is going to have someone to help him. The Broughams return to their dinner as Dudley leaves, but Henry is quivering because of his encounter with the mysterious Dudley. During the time leading up to Christmas, Dudley spends time at the Brougham house, where he unsuccessfully tries to persuade Henry to relax and spend more time with his wife and little girl, Debby (Karolyn Grimes). Henry is busy trying to raise money, so Dudley takes his place with the rest of the household. Two of the Broughams’ servants are a secretary, Mildred Cassaway (Sara Haden), and a maid, Matilda (Elsa Lanchester). They both are tired spinsters at the beginning of the movie. After meeting Dudley, each is cheerful, enthusiastic, and eager to please Dudley with a flower in her hair. Debby, who doesn’t get to see much of her busy father, is amused and enchanted by Dudley’s stories and games; he even helps her join and win a snowball fight in the park. Most of all, Dudley helps Julia. He sits with her in the park, takes her to lunch, attends Henry’s smaller church’s choir rehearsal, and even takes her ice skating. He has a merry time with her since Henry won’t. However, his real purpose is to make Henry envious, since he is taking away the affection of his family and servants. He is even wearing the scarf that Matilda gave Henry for Christmas. Just as Dudley planned, Henry is beginning to appreciate the love which he took for granted because he is jealous of Dudley. In addition, several miracles and mishaps prevent Henry from telling anyone that Dudley is an angel. Only Henry knows that, and Dudley tells him that, after he leaves, no one will even remember that he was there. In the mean time, Dudley is changing people outside the Brougham family, such as lonely, pessimistic old Professor Wuthridge. Dudley’s presence may just make the pessimistic old scholar believe in something for the first time in years. In the midst of all this, will Henry ever build his cathedral? Will he be able to cope with sour old Mrs. Hamilton? Will Henry be able to complete with a handsome angel for the love of his wife? You have to watch the movie yourself to see!

Upon its first release, this picture was not a huge success. It wasn’t very popular because people thought it was a religious film and were thus uninterested. This seems strange when you consider that religious films, Going My Way in 1945 and The Bells of St. Mary’s in 1946, were the highest-earning films in the two previous years. Maybe people were tired of religious pictures. I don’t think that was quite the problem. I think that this film slipped between denominations. Since the title mentioned a bishop’s wife, people knew that it wasn’t about a Catholic clergyman, who would be celibate. On the other hand, the term bishop in the title probably made Protestants think of the Church of Rome. Obviously, the Broughams are Episcopalians. Unfortunately, the film seemed too protestant for Catholics and too catholic for Protestants. In an attempt to eliminate the religious stigma of the picture, the film’s title was changed to Cary and the Bishop’s Wife in many parts of the country. The film was given the gossipy tagline, “Have you heard about Cary and the bishop’s wife?” That is pretty silly, since Cary Grant had nothing to do with a bishop’s wife, and his character in the movie was named Dudley. However, no one would know what the title Dudley and the Bishop’s Wife meant beforehand, and the rascally campaign managers seem to have wanted to insert an air of scandal into a perfectly wholesome film. It’s a shame that they had to use such ridiculous ballyhoo on such a tender, sincere picture, since it should have been popular without it. Fortunately, this picture was appreciated by some movie experts, since it was nominated for a best picture Academy Award.

This movie is one of the sweetest Christmas films. My family never skips it during the holiday season. It begins only a few weeks before Christmas, and it ends on Christmas Eve. There are Christmas trees, glittering lights, religious moments, and carols throughout the picture. One of the most meaningful moments in the film is when Dudley and Julia visit St. Timothy’s to hear the boys’ choir sing. The Robert Mitchell Choir, which also appeared in Going My Way, lent the excellent vocalism of its clean-scrubbed, wholesome boys to this film. The beauty of the hymn, which is sung with their pure young voices, makes the scene very touching. Another poignant moment is when Dudley is telling a story about David the shepherd to little Debby. He tells her how he rescued his lost sheep then composed the 23rd Psalm. As he recites straight from the Bible, all the members of the household gather round to hear it.

This movie has a charmingly sacred feeling, despite the somewhat fantastic depiction of an angel who looks like Cary Grant! The special effects which are used in Dudley’s miracles are very impressive. He dictates to a typewriter which composes a letter without a typist. A bunch of papers fly into the proper order in the filing cabinet at his command. One particularly magical sequence is the way Dudley decorates a Christmas tree, making ornaments, garlands, and tinsel fly onto the tree by only raising his arms. As I said in my article about The Great Rupert, modern films, with all their green screens and computer generation, have nothing which can surpass the convincing realism of the classic era.

This movie has dramatic and meaningful elements, but it also has amusing qualities and charming humour. It will make you laugh and cry as you enjoy the tender plot. This story shows a meaningful, pertinent lesson about what happens to many clergyman. Bishop Brougham wants to serve God with all his heart, but he is struggling to fulfill his duties as well as maintain his home life. In his fervent desire to construct a magnificent house of God, he is neglecting his congregation at St. Timothy’s. In being too interested about building a grand sanctuary, he is neglecting to feed his flock. God has to send Dudley to teach Henry what is really important in life. The beautiful Christmas theme with which this film leaves you is that we mustn’t forget that we are celebrating Jesus’s birthday on Christmas. Come back tomorrow for my New Year’s Eve article about another great Code film!