Today is December 26, the Second Day of “The Twelve Days of Christmas with the Code.” I am celebrating with another Code Christmas Classic. However, not all Christmas films are entirely centered around the holiday. Some movies just have a memorable Christmas scene. I am going to review such a picture for today’s feature. My movie for today is Our Vines Have Tender Grapes from 1945, an MGM picture with Edward G. Robinson, Agnes Moorehead, and Margaret O’Brien. 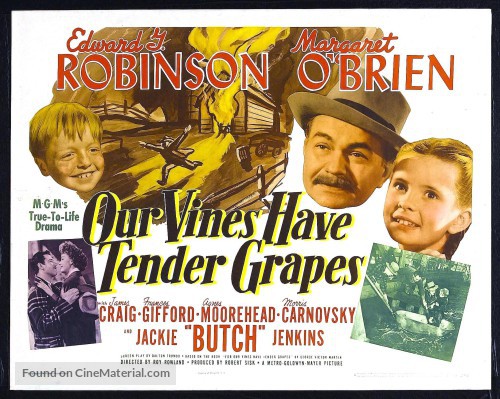 This movie shows all the events that occur in the small Wisconsin town of Fuller Junction in one year. It focuses on the life of seven year old Selma Jacobson (Margaret O’Brien) and her family. Her father is a wise Norwegian farmer named Martinius (Edward G. Robinson), and her mother is his practical wife, Bruna (Agnes Moorehead). Her playmate is her mischievous five year old cousin, Arnold Hanson (Butch Jenkins). Selma is very close to her father, and he adores her, too. The story begins at the end of summer. A new school teacher, Viola Johnson (Frances Gifford), has come to town. She is not very pleased with this appointment, since she dislikes the smallness of the town and the bigoted mentality of the residents. However, she was assigned to teach here because of her Norwegian ancestry; the school board thinks that she will be good with the Norwegian children. She meets the editor of the Fuller Junction Spectator, Nels “Editor” Halverson (James Craig), a handsome young man who takes an instant fancy to her. She likes him, but she doesn’t share his love for Fuller Junction and its occupants. He wants to court her, but she is frustrated by the fact that he never wants to leave the quiet little Wisconsin town. One of her main problems with the people of Fuller Junction is their treatment of a peculiar girl named Ingeborg Jensen (Dorothy Morris). Nobody understands the eccentric girl, whom they call crazy. Viola quickly befriends the poor girl, who is even mistreated by her father. She wants to teach her, but Mr. Jensen won’t allow her to go to school. This movie shows many of the joys, problems, and woes of Selma and the other people in Fuller Junction. An important event is the Christmas season. In the time leading up to Christmas, Selma goes into town to order presents from a catalogue for her parents. Editor helps her order the carefully chosen gifts, which she purchases with her own potato crop money. When she is at the store, her teacher, Viola, tells her that she has a special part for her in the Christmas performance she is planning. She wants Selma to recite a special story she has prepared for her and promises to help her memorize it. Selma is nervous, excited, and happy. On Christmas Eve, all the townspeople are gathered in the candle-lit church. Christmas carols are sung, and finally it is Selma’s turn to stand in front of the altar. She nervously begins to tell a sweet rendition of a well-known story which can never be over-told, the story of the first Christmas. The simple sincerity of the young girl is so charming and precious. As she finishes her heart-warming presentation, there are happy tears in her parents’ eyes. This was the most memorable and moving event in the story for me, and that is why I chose to include this picture in my “Twelve Days of Christmas” collection. The rest of the movie is filled with equally tender and lovable scenes, which are sometimes very dramatic but also very true to life. You must watch this movie yourself to appreciate the sweet small town events.

The acting is excellent in this picture. Each member of the cast provides something unique and special. What is particularly impressive in this movie is the marvelous acting of the children in the cast. Margaret O’Brien is especially brilliant in her role of Selma. Aside from Edward G. Robinson, she has the largest role in the film. This is also an excellent role for Mr. Robinson, since he is given a very wise, sympathetic character. It is a nice diversion from his famous Warner Bros. villain and gangster roles. He was actually a kind, refined gentleman, and this movie shows that. Agnes Moorehead adds a lot of depth in her role of Mrs. Jacobson. Butch Jenkins, who made his debut in this picture, is a funny, slightly morbid little playmate to Selma; he is very convincing in the role. The rest of the cast is excellent, as well.

The Code provided a guiding light in this sort of depiction of real life. With the right amount of carefulness, real life can be beautifully depicted. This picture is a brilliant example of the realistic movies which could be made under the Code. One interesting element of this story is a situation with Ingeborg. She is only seen in one scene, but she is discussed a great deal. In one scene in the school room, Miss Johnson demands to know why some of the older girls are giggling. One of them says that they were laughing about Selma’s comment that it was wonderful that Ingeborg got married and had a baby on the same day. Selma innocently says that it was wonderful; her father said so. Viola tenderly agrees and says that she thinks that that is a very nice thought. She explains that some things are funny, but others are not. She goes onto say that Ingeborg is very lonely and misunderstood; when people are misunderstood, they sometimes make mistakes. In a later scene, we find out that Ingeborg died on the same day her mother did. Selma’s mother says that she probably died because she missed her mother. That is all we really find out about the situation. I think that this scenario was probably much larger and clearer in the book from which the story comes. We really don’t find out exactly what happened with Ingeborg; this probably is the result of breening. On the other hand, it makes sense. This story is being shown from Selma’s point of view. A seven year old girl probably wouldn’t know much about a scandal which happened in her town. She would be aware of it, but she wouldn’t really understand what had occurred. Thus, the Code vagueness is very appropriate. More mature viewers can detect deeper meaning, but young people will accept Selma’s dim understanding.

This movie is a little known classic which has drama, humour, sentimentality, and tenderness. Its old-fashioned depiction of a Wisconsin town during World War II is a charming view of a former world. This week between Christmas and New Years Day is an excellent opportunity for many of us to watch a lot of wonderful movies. I highly recommend that you watch Our Vines Have Tender Grapes. This mid-Breen era film is a classic which can be appreciated at Christmas or any other time of year. Please join me tomorrow as “The Twelve Days of Christmas with the Code” continues. Happy Holidays!

9 thoughts on “The Second Day of Christmas: “Our Vines Have Tender Grapes” from 1945”