Michaela of Love Letters to Old Hollywood is hosting a blogathon to celebrate the famous pairing of Lucille Ball and Desi Arnaz. This blogathon, which is honoring the 31st anniversary of Mr. Arnaz’s death, is a tribute to the careers of this famous married couple. I am joining the celebration with an article about their first pairing, the movie which started it all, Too Many Girls from 1940. 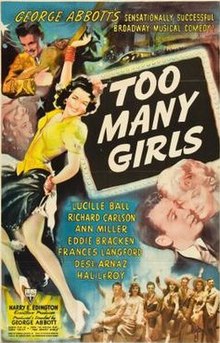 This is the story of four All-American football players who are hired to be the bodyguards of a millionaire’s trouble-making daughter, Connie; when she decides to go to her father’s Midwestern alma mater, Pottawatomie University, the four young men also enroll, keeping in mind the anti-romantic clause which forbids them to make a pass at their charge, as well. It turns out that Connie did not decide to attend Pottawatomie because of loyalty to the family alma mater or because of a great thirst for knowledge. Her beau, an English playwright, lives very near the campus, so attending this school gives her a chance to see him often. The football players, however, are determined to keep the Englishman from making a lateral pass. Pottawatomie has a sorority with a peculiar custom that is both comforting and frustrating. All the members wear beanies which signify that they don’t “neck.” While this policy, which seems like a left-over rule of the 1920s Anti-Flirt Club, is annoying in the young men’s own romantic lives, it is reassuring regarding their charge. When they first accepted the job, all four of the young men were thinking not only about the money but about the prettiness of the girl they had to protect. However, in the face of a preponderance of co-eds, three of the youths find the anti-romantic clause easy to obey, since there are plenty of other girls. The leader of the group, Clint Kelly, finds himself falling for the girl he is supposed to keep out of trouble, but he can’t tell her who he is, since he is receiving an excellent salary from her father. Meanwhile, the four football stars are very frustrated by the mediocrity of the Pottawatomie football team, but they claim that they can’t play due to heart trouble; they are afraid that they will be recognized and exposed if they join the team. However, in the middle of a losing game, Manuelito, one of the four players, joins the game without permission. Just when their team is making some progress, he is injured. Connie tells the other three boys that she knows they’ve played football; they have to join the game for Pottawatomie. They agree, and the team wins the game. When Connie’s father hears about this, he is immensely pleased that his alma mater is an athletic success for the first time in years. He arranges for Pottawatomie to play against some of the country’s best teams. The four champions lead the mediocre football team to a place as one of the nation’s greatest teams. However, when Connie tells Clint that she loves him, he is torn. He no longer cares about the big game the next day; he wants to resign as her bodyguard so he can tell her who he really is. Unfortunately, she finds out who he is by herself, and she is furious. She feels like he tricked her and just wooed her to keep other men away from her. She decides to go East, so her four bodyguards have to follow her. This leaves the school in a terrible position for the game the next day. Will they be able to find a way to win the game for Pottawatomie? Will Clint be able to make Connie realize that he really loves her? Will the other three fellows be reunited with their girls? You have to watch the movie to find out! Lucille Ball plays Connie Casey, the spoiled millionaire’s daughter who decides to go to Pottawatomie University. Richard Carlson plays Clint Kelly, the leader of the four football bodyguards who falls in love with the girl he is supposed to chaperon. Desi Arnaz plays Manuelito, a South American football player who is a star athlete and an incomparable ladies’ man. Eddie Bracken plays Jojo Jordan, a rather comical member of the football-playing

bodyguard group. The final member of the football playing foursome is Al Terwilliger, an comical young man played by Hal Le Roy. Some of the supporting co-eds

in the story are Pepe, an exuberant Hispanic girl played by Ann Miller, Eileen Eilers, the singing student body president played by Frances Langford, and Tallulah

Douglas Walton plays Beverly Waverly, the English playwright who is Connie’s beau. This movie was the debut of three actors, Desi Arnaz, Eddie Bracken, and Van Johnson. While the first two actors had prominent roles in this picture, Mr. Johnson’s role was that of an uncredited college student at Pottawatomie who has two lines; however, he is frequently visible in group scenes. There are many musical numbers in this movie, which has an excellent Rodgers and Hart score. Frances Langford sings, Ann Miller sings and dances, and Desi gives us a sample of his South American music. The most memorable song is “I Didn’t Know What Time It Was,” the hit tune which made its film debut in this movie. Lucy, over-dubbed by Trudy Erwin, sings the song first to Clint; later, Jojo comically reprises it as he recounts it to the other football-playing bodyguards. The movie’s finale is a big Latin number, “Spic and Spanish,” in which everyone sings and dances; even some particles under a professor’s microscope dance to the Latin rhythm! If you watch this movie just to see Lucy and Desi acting together, you will probably be disappointed. They have virtually no interaction. However, it is interesting to see this film, since it was their first one together. They met on the set, fell in love, and got married six months after filming ended. Thus, even though they had no onscreen romance, they had a beautiful offscreen romance which was the beginning of the famous pairing which would would be featured in two other movies and many television shows.

When I was a very young girl, my mother, sister, and I would watch “I Love Lucy” on channel 13 every morning with breakfast. Since I was home-schooled, I worked on my schoolwork in our living room. I always felt motivated to work well in the morning, since I was looking forward to seeing more of the hilarious antics of Lucy, Ricky, Ethel, and Fred. At that time, since the show was in black and white and looked grainy on our little television, I thought it must be terribly old. Now I realize that it was in the 1950s. I will always think of them as one of the best teams in television history. If you want to see this team prominently displayed and acting together in a movie, I suggest their other two films, The Long, Long Trailer from 1955 and Forever, Darling from 1956.

However, Too Many Girls stands apart as the movie which started it all.

In general, I would say that this is a pleasant but unexceptional film. It is definitely silly at times, and the plot is somewhat weak. I found it entertaining, but it is not excellent. It is interesting to see these actors in early roles, and I think that any fans of Desi Arnaz, Eddy Bracken, and Van Johnson would enjoy seeing them in their film debuts, even though the roles are rather brief. I found parts of the film to be very amusing, particularly those with Eddy Bracken; he is very funny in this movie. Some of the musical numbers are very good, and others are unmemorable. Miss Ball and Miss Langford look very pretty in their costumes in this movie, and Mr. Arnaz looks youthfully fresh and handsome.

Personally, one of the things I appreciate most about this film is that it is entirely free from objection from a Code standpoint. It was made in 1940, and obviously so. It has that good, clean Code feeling. The only thing which I sense was changed was the situation with the beanies. Since this did come from a play by Rodgers and Hart, who were noted for their risqueity, I have a feeling that the beanies originally signified maidenhood. The flippant discussion of a woman’s maidenhood or lack thereof was not acceptable to the Production Code Administration, so it was cleverly changed to an Anti-Flirt Club-like rule about young ladies abstaining from necking. Although that seems more like a useful sorority feature in the 1920s rather than 1940, Pottawatomie does seem rather behind the times, so I find this to be realistic. Too Many Girls may not be the most brilliant film ever made, but it pleases me to see any film which adheres to the Code and which obviously did not give Joseph Breen much trouble.

I recommend this picture for people who like classic musicals, college stories, carefree comedies, Lucy and Desi, or Van Johnson. I think any classic movie lover who can enjoy movies without taking them too seriously might like this picture. It’s charming in its rather silly way. It’s entertaining, and it doesn’t tax your mind, emotions, or sensibilities. While a good drama can be very enjoyable, sometimes one just wants to see a light, carefree tale that doesn’t have too many problems; it’s a diversion from the problems of life. Isn’t that the ultimate goal of all forms of entertainment? Modern filmmakers seem to have forgotten that. Maybe the reinstatement of the Code could revive simple, wholesome entertainment like this that showcases great talent and can be enjoyed by the whole family!

I would like to thank Michaela for hosting this blogathon and for allowing me to participate. Reading her announcement and her first contribution to the blogathon made me want to watch some of my favorite I Love Lucy episodes. She obviously has a great affection for this dynamic team, and she has created a wonderful tribute to them with this blogathon. I especially like her article about Desi Arnaz; it is tender, fascinating, and extremely informative. Lucy and Desi were a great team who provided wholesome entertainment to America through television even in the later 50s, when films no longer cared to do so! Watch some of their great collaborations at your earliest opportunity!