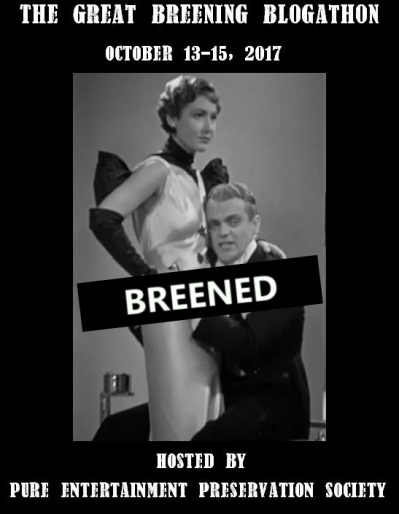 This weekend was very busy, and everyone, including myself, was not able to finish all his articles by Sunday. Thus, I’ve extended the blogathon through this week. I’m excepting new articles as they come in. Next week I will post the final roster which will feature all the articles.

Today, two articles were published as part of the “Great Breening Blogathon.” Here they are:

The Breening of Night Nurse, 1931 by Beth Daniels for Mildred’s Fatburgers

Beth Daniels did an exceptionally fine job of breening a famous Warner Bros. pre-Code film, Night Nurse. We were terribly impressed by the detailed, intelligent way in which she wrote her article. She listed every section of the Code that was violated, explained how it was violated, and proposed how it could be fixed. Her version of the film sounds ideal and completely Code-compliant. Miss Daniels rightly identified the problem of the numerous undressing scenes; while it would be best for them to be completely eliminated, some of them could remain as long as the girls were never shown in less than full slips. The drunken mother being an invalid is an excellent suggestion. We were very impressed by her suggestion of making the bootlegger a milkman. Of course, he could start as a bootlegger who has to go to Laura after being shot. When she sees him again, he says that he has reformed, but it is revealed that he really hasn’t. Instead, he should really have reformed and become a milkman, as Miss Daniels suggested. Regarding the actual surgery, MGM’s Dr. Kildare series from 1938 to 1942 provides an excellent example of Code medical dramas. I agree that the surgery is too long in this movie. We were very pleasantly surprised that Miss Daniels noted the problem with the forbidden expression “Nuts.” We also noticed the use of the forbidden “lousy.” We highly recommend that all our readers read this fine, highly effective and equally entertaining breening article. We thank Miss Daniels for her participation and for the witty reference she made to our blogathon. It is with great pleasure that we present this PEPS Seal of Approval to Beth Daniels for her marvelous breening. (All PEPS Seals may be reproduced on the receiver’s website with our blessing.)

“Twinkling Stars:” An Original Movie from 1937 by Tiffany Brannan for PEPS

This is an article about my original film idea from 1937 with James Cagney and Eleanor Powell. I have hinted at my ideas for musicals which could have been made with these dancers, but you have to read this article if you want to know my idea for a whole movie which could have been made with them. Of course, I had to make the romance more complicated by adding Lew Ayres, Virginia Bruce, and Ruth Hussey to the cast. I hope my article will make the movie seem real to you. Although we do not award ourselves PEPS Seals of Approval, we think Mr. Breen would have approved of this proposed production.

Thank you so much for reading these articles and all the others in this blogathon. Joseph Breen would have thanked you, and we Brannans do!