This article was written by James Brannan, the president of the Pure Entertainment Preservation Society.

Frank Sinatra, also known as “Old Blue Eyes,” perhaps the most famous singer of all time, is seen in the distance on a vast sound stage. His hands in his pockets, dressed in a stylish 1950s suit with his signature hat, Frank slowly walks toward the camera, smoothly crooning the great Van Heusen and Cahn hit “(Love is) The Tender Trap.” This is a great opener to a great film, MGM’s musical The Tender Trap from 1955.

I love this film as it is; it’s a swell picture. However, it is obvious from this film alone that the Production Code Administration had already greatly weakened by 1955. Geoffrey Shurlock had only officially been head of the PCA for a year, but his inferior self-regulating was already extremely apparent. Unlike some films from this year, there was no need for this movie to be less than 100% Code compliant. With remarkably small changes, this picture can be hypothetically made into a film which Joseph Breen himself would have approved. The purpose of Breening is to show that a film can be just as entertaining without the risque little things that filmmakers often like to include.

As president of PEPS, I wanted my first article published on our website to be a Breening of a film I thoroughly enjoy. I decided to write it for our first blogathon, “The Great Breening Blogathon,” which is celebrating Joe Breen’s 129th birthday. I have watched The Tender Trap at least twenty times over the years. In all honesty, I initially struggled with the thought of changing anything in this film, but then I recalled the purpose of the Code in the first place: to maintain a moral standard in every film that will allow whole families, people of all ages, to enjoy the movie-going experience without being exposed, either blatantly or subliminally, to images or dialogue that are not squeaky clean! When I am finished self-regulating The Tender Trap, I hope the film will be relatively free from anything that is likely to bring offense and that it will be, to quote Mr. Breen, “reasonably acceptable to reasonable people.” And now, with no further ado, here goes my first Breening!

Charlie’s other lady friend, Jessica (Jarma Lewis), enters the apartment while Poppy is freshening up in the bathroom. She comments on how the apartment needs a good cleaning and stops to look at the couch, saying “And that couch! What have you been doing on that couch?” The Breen office would suggest eliminating this comment and Joe’s (David Wayne) subsequent reaction of frantically pouring another martini and guzzling it. Also, Joe asks, “Where did all these tomatoes come from?” referring to the number of girls he sees. The Breen office would suggest another word like “dolls” or “dames.”

As Jessica is leaving, she kisses Charlie and says “Tiger,” almost growling. The Breen office would likely suggest that referring to him as Tiger should be eliminated because it is too close to the forbidden expression “Tom Cat.” A substitute term of endearment would be better here, such as “Honey Lamb,” or “Sugar Pie,”  especially fitting perhaps, since Jessica is a southern belle.

Soon after, as Charlie’s more serious lady friend, Sylvia (Celeste Holm), is leaving, she sarcastically imitates Jessica by saying “Tigah” and making a low growl while kissing Charlie goodbye. The Code Office would suggest that this should be replaced in kind by her saying “Honey Lamb” with an exaggerated Southern accent. This would be equally effective without being so suggestive.

Later, Charlie is taking a shower while Joe leans on the counter and talks about his wife, Ethel, upon whom Charlie had a crush in high school. Reference is made to Charlie being slapped with a paternity suit by a loose girl “with the hot eyes” whom he took to the dance instead of Ethel. Joe then says “At least they cleared you. Ethel always said ‘Old Charlie couldn’t have done it. He didn’t have the know how.’” The Breen office would suggest removing this line of dialogue due to its reference to improper intimate relations. It could remain if it was changed to a breach of promise suit. Also, the Code forbids the describing of a woman as hot. Some other description should be used. In this same sequence there are several shots of Charlie in or near the shower showing his face and torso, suggesting he is stark naked below camera view. The Breen office would suggest these be removed.

Later at an audition, Julie Gillis (Debbie Reynolds), the new girl about to enter Charlie’s life, is seen on stage giving a tempo suggestion to the pianist. She does so by tapping her feet and bouncing her posterior in the process. She does this twice, the second time more emphatically. Charlie, seated in the auditorium, leans forward in reaction to this and says, “I think this girl has got something”. The Breen office would suggest this be changed, not necessarily eliminated. Perhaps she could be facing stage right and tapping the tempo; making her skirt looser would help, too. Charlie could make the comment “I think this girl has got something” earlier when she first enters the stage and says, “Hello, is anybody out there?”

After they have begun dating, Charlie and Miss Gillis go to her apartment while her parents are out of town. When they enter the apartment, Charlie immediately embraces her. She appropriately says he should go home. He persists, and she suggests that the evening could be prolonged by her inviting him in for a night cap. She does, and he stays. He suggests they “neck,” she agrees, and they sit on the couch. His advances become more aggressive,  and he turns off the end table light. Again, as a good girl should, she asks, “Why did you do that?” He says, “Some words take on a different meaning in the dark,” and moves in even more aggressively. She says, “Charlie, you’re not talking, you’re nibbling,” and she abruptly turns on the light, saying, “My idea of necking and yours are two different things.” Miss Gillis suggests they watch television instead and turns the TV on. Esther Williams is seen romantically swimming with a male costar. (There is nothing wrong here, since it was a good Code film clip being shown.) Charlie is inspired, however, and makes affectionate advances again.

She quickly suggests they look at a book of Renaissance art. Charlie turns to a page showing several nude figures, about which he makes risque comments. Madame Pompadour is shown nude, and Charlie says, “Are her folks gone for the weekend?” About another painting he says, “I want to soak in all this wonderful detail.” Next, they see a couple embracing through a sheer curtain in an apartment cross the way. She says, “That is a happily married couple.” Exasperated, Charlie says they can’t help but give into their desires because everything is conspiring against them, “Science, the arts, the animal kingdom!” (referring to the couple kissing across the way.) The Breen office may have suggested that they should eliminate the nude art and Charlie’s risque comments about it. Also, eliminate him referring to the kissing married couple as “the animal kingdom.”

Later, Charlie impulsively proposes to Sylvia. To celebrate their engagement, he throws a “wingding” which is not shown but is widely discussed. When inviting one man over the telephone, he says, “Slip your wife into something seductive and come on over.” The Breen office would eliminate this suggestive line, since it adds to the idea that this party is going to be widely immoral. This should not be implied before or after.

The final Breen objection is the use of the words louse and lousy. Several times in the film, Charlie is referred to as a louse, and his martini-making as lousy. The term louse was considered vulgar by many censor boards during this period. It should therefore be replaced by the words cad, heel, or rat, for example.

How would these Breen office changes have effected the overall quality of this film? I invite you to watch this film and see for yourself. As you are viewing this great musical, keep the changes I have mentioned in mind and consider the overall effect they would have had on it. Happy birthday, Joseph Breen! 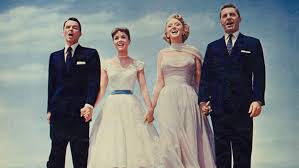 5 thoughts on “THE GREAT BREENING BLOGATHON: Breening “The Tender Trap” from 1955 by James Brannan”