This article was written by Teresa Brannan, James’s wife, Tiffany and Rebekah’s mother, and the inspiring force behind PEPS, like all Brannan endeavors. 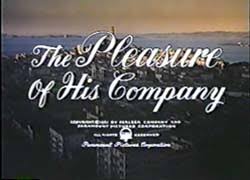 The Pleasure of His Company is a 1961 comedy film starring Fred Astaire and Debbie Reynolds, directed by George Seaton and released by Paramount Pictures. It was based on a 1958 play of the same name by Samuel A. Taylor and Cornelia Otis Skinner. As they say: “Art often imitates life.” I can attest to this because my own life story is similar to this movie plot. I believe this is why some stories appeal to some people perhaps more than others.

This story moved me to tears the first time I saw it and still has the same emotional pull each and every time I watch it.

Now that I have sung the movie’s praises, let me tell you the premise of the story. A young San Francisco debutante, Jessica Poole (Debbie Reynolds) is about to be married to a cattle rancher, Roger Henderson (Tab Hunter). His ranch is in the Valley of the Moon in Sonoma County. Jessica’s mother, Katharine “Kate” Dougherty, who was divorced from her first husband when Jessica was very young, is now married to James “Jim” Dougherty, a banker in San Francisco. They have invited Jessica’s father to the wedding to give her away, at her request, but have received no replies to their numerous cablegrams. Biddeford “Pogo” Poole arrives unannounced at the Dougherty home when they are out and makes fast friends with their cook and housekeeper, Toy.

The family arrives home and Kate’s father, Mackenzie Savage (Charles Ruggles), comes from his home in Carmel for the upcoming wedding. Upon seeing him, Jessica is overjoyed though still upset at her father not responding to their invitations. She goes upstairs to try on her mink stole and the outfit she will wear after the wedding; while she is dressing, Pogo comes downstairs to greet everyone. Kate is pleasantly surprised to see him and introduces him to her new husband. As Jessica descends the staircase, she talks to her grandfather, and, as she looks around the room, she spots her father for the first time in fifteen years. She is speechless and overwhelmed with emotion. It is a tender reunion for both of them. 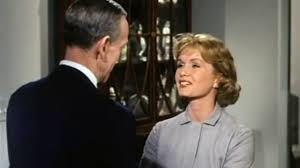 The movie proceeds to Pogo meeting Roger for the first time. You can tell that he is unimpressed with his future son-in-law and sets out to disillusion Jessica about faultless Roger. He wines and dines her around San Francisco as he shows her the city. He convinces her to go and see the world with him, and she almost calls off the wedding. You see that the divorce has caused a great conflict in Jessica because she has not had the chance to have all of the wonderful experiences she would have had with her father if her parents had not gotten divorced. Even though divorce is unacceptable under the Code, it is allowed because it is not between the main characters.

For “The Great Breening Blogathon,” I decided to breen this Shurlock era film as my first PEPS article. This is a very clean movie with the exception of a few curse words and few lines. The first violation comes when they are looking a statue that someone has sent to Jessica, so they think. The grandfather says, “Do you remember your Aunt Edith?” as he turns the statue around to reveal the very large posterior of the wooden statue. This line should be removed because it is in poor taste and not at all necessary to the plot.

Both Pogo and Kate say the word hell when they are in heated discussions with each other. That word should be removed. Next, Kate is saying that the young couple will be romanced on the peninsula, and Pogo asks what they will be doing. Kate says, “We’re going to bed.” Pogo then replies, “Is that the best you can offer?” Kate quickly answers, “That wasn’t an offer.” This whole dialogue should be removed because it is suggestive and inappropriate since they are not married anymore.

After a wonderful dinner at a French restaurant that Pogo arranged for Jessica, Roger, and himself, they come back home and father and daughter dance together the first side of a record while Roger watches as he drinks and smokes to pass the time. Pogo says goodnight after many parting words, and then an argument ensues between the young couple. Kate, who is upstairs reading in bed, hears the loud voices and quickly comes downstairs, accompanied by her husband, Jim. They try to patch up the disagreement and send Roger home. Kate sends Jim back upstairs so she can a private discussion with her daughter.

Pogo comes downstairs and wants to get in on the conversation, as he asks for a nightcap. Jessica gets it for him and says goodnight. Kate says that Pogo should take his drink to his room, but he says he would rather drink it downstairs if she would stay with him. They have a heated discussion, and Kate ends up slapping Pogo. He plays on her emotions gets her to give him a rather passionate kiss. This kiss needs to be removed because it is improper since they are no longer married.

The next violation comes when Pogo is about to leave for Paris so he doesn’t upset the wedding. Mr. Savage says to Pogo, “For a moment I thought you had her.” Pogo responds, “I can beat him with words. What beat me is the sexual appeal of a young buck in his prime.” The sexual appeal comment must be changed. Pogo could say, “A young man in his prime.” Later in that scene, Jessica decides to go to Europe for a year with her father instead of marrying Roger, and Pogo says to Mr. Savage, “Sex isn’t everything.” This line needs to be removed. He could say, “Youth isn’t everything.” Then Kate implores Pogo not to take Jessica and tells him he can stop all of this nonsense. Pogo responds by saying that Jessica isn’t ready to get married. She says to him, “She was until you came around. She was panting.” Pogo replies, “Don’t be vulgar!” Even Pogo is appalled at this comment. This is the final line that needs to be removed.

As the movie comes to the conclusion, you see that Pogo’s attempts to convince Jessica to leave Roger have failed. At one point you even think he is then making a play for his ex-wife Kate because he realizes how much he loved her and the fun they shared together. At the parting scene at the airport, Jim, Kate, and Mr. Savage watch as Pogo is about to board the plane bound for Paris. Under his arm is a picture of Jessica as a little girl, the way he has always pictured her through the lost years.

As Kate is yelling at him to bring back her portrait, Jim realizes that he has someone with him. To their disbelief, they see that it is Toy. He yells to them, “I go see where Rupert Brooke is buried. I go see world.” You see the longing in Pogo’s eyes that he really wishes it was Kate who was going with him, but then in an instant he is back to his free-spirited, lighthearted manner. This really shows the pain and loss of divorce for all concerned!

As you can see, there were very few changes that need to be made to make this delightful film Seal-worthy. The small changes in no way upset the plot or storytelling but only make it acceptable for all audiences, no matter their age or sensitivities. It is far better to see a movie in which you have no objections to anything the actors say or do than to walk away wondering why they felt the need to put in an offensive word or phrase, just for effect. An intelligent person can make his point without adding any profanity for effect! The modern day person should try to remember this fact in his own life.

This is a wonderful movie that won Fred Astaire a Golden Globe Award after he had retired from dancing on screen, although he danced with Debbie Reynolds and Lilli Palmer. All of the actors gave wonderful performances, and Charles Ruggles is always delightful. He is a great addition to the cast, playing a wonderful grandfather as he also does in “Parent Trap,” a Disney movie from 1961 that starred Hayley Mills, Maureen O’Hara, and Brian Keith.

I hope you enjoy this movie as much as I always do!

2 thoughts on “THE GREAT BREENING BLOGATHON: Breening “The Pleasure of His Company” from 1961”