The Solid Gold Cadillac begins with shots of Rockefeller Center which are accompanied by George Burns’s narration. As the camera goes into a huge office building, Mr. Burns tells the audience about the backbone of American industry, namely, stockholders. As he explains the concept of stockholders’ meetings, he introduces us to just such a meeting, which is happening before our very eyes. This is the annual stockholders’ meeting of International Projects, a multi-million dollar corporation which manufactures nearly everything. 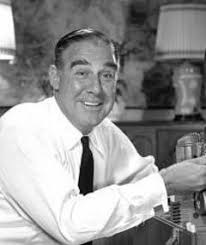 The man who has built the company for years, Edward L. McKeever, perfectly played by Paul Douglas, is retiring from position of president to go to Washington at special command of the president.

Thus, his assistant, Jack Blessington, portrayed by John Williams, is taking over the company.

The meeting is going very smoothly until a stockholder in the audience, Miss Laura Partridge, brilliantly played by Judy Holliday, begins asking questions. She questions the size of the directors’ salaries, their representation of the stockholders, and Mr. McKeever’s interest in the meeting. Her ten shares of stock give her that right. Within minutes, the entire meeting is in a state of chaos. At this point, George Burns tells us that the film is dedicated to little stockholders like the outspoken Miss Partridge, and the story really begins.

Mr. McKeever and Laura meet in the soda shop in the building’s lobby, and he offers her a ride home. While his assistant thinks she is a little crazy, Ed likes the talkative, somewhat irrational aspiring actress. She tells him that she will attend all the International Projects meetings and “look after things.” The new friends say goodbye; he goes to Washington, D. C., and she goes to the stockholders’ meetings.

It is not long before the four directors of the company are anxious to get the inquisitive young lady out of their meetings. You see, these four fellows are crooks who have just been waiting for an opportunity to get in control and make a lot of money for themselves, even if the company and the stockholders suffer.

Jack Blessington, a shrewd operator, reasons “If you can’t crush them, join them. If you can’t kill them, acquire them.” They can’t kill Miss Patridge, even though the treasurer suggests that they try, so Mr. Blessington offers her a job in the company. Her job is to answer any questions the stockholders have and to make friends for the company, but the stockholders never have questions, so the job is just a convenient way to remove her without getting the chair for murder. Jack thinks that $125 a week is not too much money to ensure that she is not at the meetings.

Laura is thrilled to be working in a big company, but her energetic nature quickly becomes bored in the inactive position.

She has a typewriter, a coffee pot, homemade sandwiches, and a sweet, efficient secretary named Amelia, played by Neva Patterson, but she has no work to do. Thus, she takes it upon herself to follow Mr. Blessington’s instructions to make friends for the company by writing to the stockholders.

Amelia reluctantly brings her the list of stockholders, and she begins to write enormous amounts of letters. It is not long before she has the largest office staff in the building and is spending $300 a week in postage! However, as she gets farther into the company, she sees more of the corruption and greed which fills the lavish offices of the selfish directors.

Amelia and her sweetheart, Mark Jenkins, another employee who is played by Arthur O’Connell, help Laura unravel the dirty secrets in the company’s management. Laura soon realizes that they can’t fix the company alone; they need Mr. McKeever. 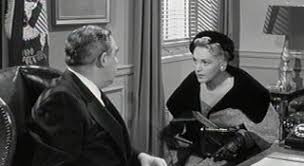 The directors send her to Washington to entice him into giving them the government contracts they want, but she uses the opportunity to tell him what is happening to the company. He agrees to come back, but can a few honest people destroy big corruption? Watch this golden film to find out!

One of the taglines for this film was “Judy Holliday is golden,” and she certainly was. Her talents are amply displayed in this comical, tender, heart-warming film directed by Richard Quine. She plays a girl who seems like a dumb blonde, since she is just a little silly and irrational, but she proves to have unsuspected depth and intelligence. Miss Holliday was very good at portraying this sort of character. Paul Douglas is charming as the gruff but lovable Ed McKeeveer. The rest of the cast is excellent, too. The entire film is made out of fourteen carat gold, so how could it not be brilliant?

Since this is for the “Colour Blogathon,” I must say something about the colour in this picture’s title. The solid gold cadillac of the title is only seen twice.

The first time is in a cartoon in the opening credits; as the names jump onto the screen, cartoon Judy drives the golden car across the screen several times. Of course, we only understand that the cartoon car is gold, since it is in black and white. As you watch this brilliant film, you may begin to wonder why it is called The Solid Gold Cadillac at all. You have to wait until the very ending. The last minute or so of the film shows Laura Partridge exiting the International Projects building and approaching a car which is parked at the curb. George Burns tells us that she was given a special gift of a solid gold cadillac. At this precise moment, the film changes to Technicolor!

Now we can see that the beautiful car is indeed a shining, metallic gold. The concept of having only part of a movie in colour was very popular in the 1920s and 30s. By the mid-50s it was rather old, but this made it uncommon and unique. It still was extremely effective!

I would like to thank my hostess, Catherine from “Thoughts All Sorts,” for hosting this blogathon. It was peachy.  I hope that her blogathon is such a success that she will be in the pink with everything looking rosy. Who can be blue during such a swell blogathon?

By the way, one good blogathon deserves another! I am hosting my very first blogathon, “The Great Breening Blogathon,” in mid-October: https://pureentertainmentpreservationsociety.wordpress.com/2017/09/07/extra-the-great-breening-blogathon/. It is all about the Golden Era of entertainment on the Silver Screen. We are celebrating the birthday of a sterling gentleman, Joseph I. Breen, who was the head of the Production Code Administration from 1934 to 1954. It was his wise and prudent enforcement of the Motion Picture Production Code during these years that made the Golden Era golden! He has sadly gotten the black reputation of a censor, but he was not one; he was a self-regulator who was appointed and liked by filmmakers. During these two wonderful decades, he kept red dialogue and blue scenarios off the Silver Screen, so audiences poured into the theatres. The studios’ finances went from being in the red to in the black in a few months! Join this blogathon to find out what it was like to be a filmmaker during the Golden Breen Era! If you are trying to think of a good film to breen for this blogathon, The Solid Gold Cadillac is a fine choice. It is an early Shurlock film which has the spirit of the Code but multiple breenable elements. Your joining this blogathon will surely make my day rosy and ginger peachy! Now, I think I have exhausted the colourful adjectives, so I will fade to black, leaving a rainbow as the memory of this lovely Colour Blogathon!