What film contains all the characters I listed in the title? Monkey Business from 1952 is the only one I know! Cary Grant is the chemist, Ginger Rogers is his wife, Marylin Monroe is the secretary, and Esther, the chimpanzee, is the scientist! For the “Movie Scientist Blogathon” hosted by Silver Screenings and Christina Wehner, I am going to write about Dr. Barnaby Fulton, the brilliant chemist who finds the miracle formula of mental youth with the assistance of an ape.

Dr. Barnaby Fulton has been working on a youth formula for two years. He is employed at a plant by Oliver Oxley, who has grander plans for the formula than Dr. Fulton does. While Barnaby hopes only to make a formula to reverse the effects of aging like poor eye sight and arthritic pains, Mr. Oxley hopes to discover the fountain of youth to reverse all aging, which they will call B-4 (Before). Barnaby’s wife, Edwina, is very patient with his occasional absent-mindedness, which sometimes makes him a complete mad scientist. 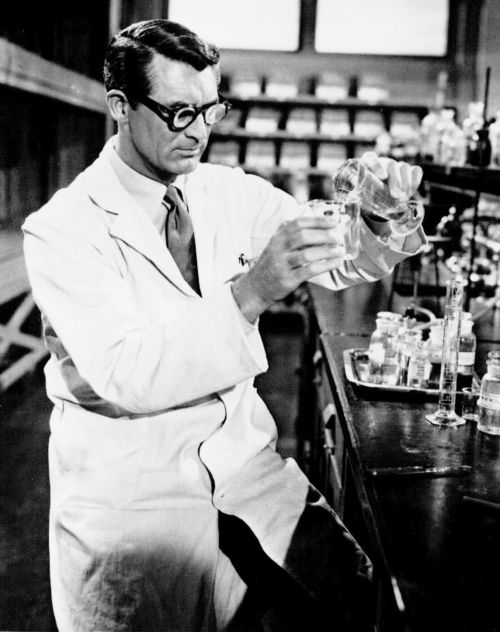 Barnaby has been experimenting on chimpanzees, but he decides to test his latest innovation on himself. He swallows the formula bravely, washing down the disgusting formula with water from the water cooler. Within a minute or so, he gets dizzy and starts to become blind. When he takes off his glasses, he realizes that his eyesight was not worsened by the formula; it strengthened his eyes so much that his thick glasses rendered him blind. He then realizes that his bursitis is gone. Within minutes, he feels lively, vivacious, and so enthusiastic that he is acting perfectly ridiculous. The miraculous formula has made him feel twenty again while looking the same. Little does he know that these groundbreaking results have absolutely nothing to do with the formula on which he has worked so hard. They came from the water chaser, which contains a formula that a mischievous chimpanzee, Esther, mixed and dumped into the cooler. With the exuberant foolishness of his newfound youth, Barnaby sets out to do the town. He wastes no time in getting a funny haircut, an obnoxious, striped coat, a red sports car, and an admiring companion for the day in the form of Miss Lois Laurel, Mr. Oxley’s dimwitted but full-figured blonde secretary.

They rollerskate, swim at a public pool,  drive recklessly around town, and casually flirt in a very juvenile manner. There are almost disastrous results when the formula begins to wear off while Barnaby is driving. After Barnaby takes a nap, the effects of the serum have completely worn off. However, the adventures have just begun.

Later that evening, Edwina takes some of the formula so Barnaby can study her reactions. She washes it down with the infected water, so she experiences the effects of mental youth. She has no physical reactions, since she has not aged much, but she begins to act like a very silly college girl.

She persuades Barnaby to go with her to the hotel where they spent their honeymoon; it is not long before she thinks that they are actually on their honeymoon. She goes from a nervous, blushing bride to a hysterical girl who is crying for her mother and calling her lawyer, who is a former sweetheart, about getting a divorce. After these ludicrous results, Barnaby decides to destroy the formula. They are far from safe, though, since the water is still infected. 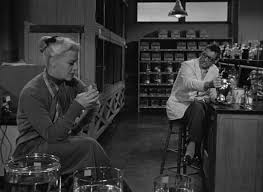 When Edwina and Barnaby drink several cups of coffee made from the youth-inducing water, they mentally revert to ten years of age. They begin playing, fighting, and talking like children.

Mr. Oxley is desperate to find out what the secret ingredient is, but Barnaby is more interested in fun and games than in financial agreements. When Edwina childishly threatens to call her lawyer friend, Hank, Barnaby joins forces with a group of children. 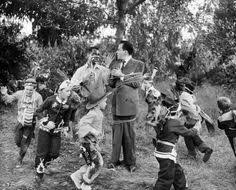 While playing Indians, they all follow Barnaby’s plan to scalp Hank. Through a hilarious misunderstanding, Edwina mistakes a neighbor’s infant for Barnaby.

She thinks that the formula has backfired and physically turned him into a baby. Meanwhile, Mr. Oxley wants to find out the true recipe so they can make an antidote for Barnaby, although he really wants to know it so he can make a fortune off B-4. This will not be easy; how can Barnaby tell them the formula when he hasn’t learned to talk yet? On the other hand, how can the formula ever be made and widely produced when even Barnaby doesn’t know the real recipe? Unless Esther the chimpanzee learns to talk, you will have to see Howard Hawks’s conclusion of this hilarious comedy to find out. 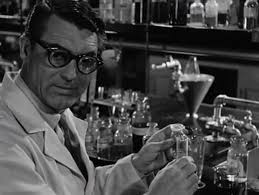 Cary Grant is very funny and versatile in the role of Dr. Barnaby Fulton. He easily and speedily transitions from a sensible, thoughtful scientist into a youthful lunatic. 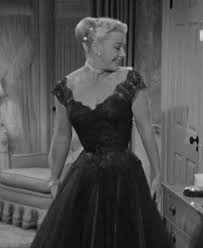 Ginger Rogers is excellent in the role of his considerate and understanding wife, Edwina, who becomes a wild, jealous, and sometimes hysterical maniac after taking the formula. 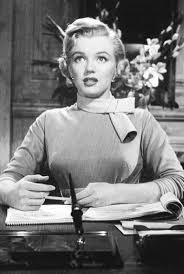 Marylin Monroe effectively portrays the role of Oxley’s secretary, Miss Laurel, who is infatuated with Dr. Fulton, especially after the formula has made him young and wild.

Charles Coburn is perfectly cast as the greedy, selfish, and rather lecherous Mr. Oxley, who wants his own way above everything else.

Hugh Marlowe is very amusing in his small role of Hank Entwhistle, the lawyer who used to be Edwina’s sweetheart and still loves her. Of course, I cannot neglect to say a word about the true scientific genius in this movie, Esther.

She is played by a well-trained, extremely comical chimpanzee. Like most chimpanzees who are seen in movies, she contorts her face in positively hilarious ways. She is very convincing as an ape who knows the secret to youth better than human chemists. 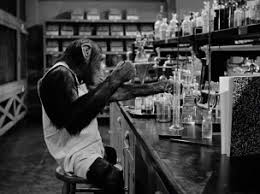 She shakes her head while watching Barnaby mix his formula. At her first opportunity, she shows him how to correctly make it.

The concept of a youth-restoring serum is one which dates back to ancient times. Mr. Oxley is clearly interested in finding the fountain of youth which alchemists sought. Barnaby is looking for a less magical chemical formula which will reduce the effects of age but not age itself. I don’t think he is opposed to a miracle youth serum; he just thinks that it may be impossible to find the right combination to make such a formula. The formula which Esther creates exceeds Barnaby’s hopes, but it is not exactly the fountain of youth. Ideally, a youth serum would permanently return the body to complete youth; the taker should look and feel exactly as he did at his physical prime. B-4 creates a feeling of youth but does not change one’s appearance. Physical aging symptoms like presbyopia and bursitis disappear, and the mind is returned to a state of youthful foolishness. However, if you ask me, the users of B-4 do not just act young; they act insane and rather drunk. I find it highly improbable that Barnaby and Edwina were as silly at twenty as they are after taking B-4. Also, the effects are quite limited. They only last for a few mad hours. I’m sure that this would please Oxley, since it would force the consumer to buy large quantities of B-4 to keep feeling young. Ah, well! Many a scientific failure is a commercial success.

I would like to thank my hostesses, Ruth and Christina. It was grand writing about a good scientist. I hope they have as much success when they focus on the mad and lonely scientists. On a side note, one good blogathon deserves another! I am hosting my first blogathon, “The Great Breening Blogathon,” in mid-October to celebrate the 129th birthday of Joseph I. Breen, Hollywood’s self-regulator: https://wordpress.com/post/pureentertainmentpreservationsociety.wordpress.com/4911. I hope my hostesses and my readers will join and find out what it was like to be a filmmaker during the Golden Breen Era of the cinema!

7 thoughts on “An Absent-Minded Chemist, A Test-Victim Wife, A Mindless Secretary, and A Genius Scientist!”