This article is part of “The Van Johnson Blogathon:” https://loveletterstooldhollywood.blogspot.com/2017/08/the-van-johnson-blogathon-is-here.html

Van Johnson has long been considered one of the nicest actors of the Code era. He had a wholesome quality which enabled him to play the oft-mentioned boy next door. His honest yet handsome face, clear Rhode Island accent, and all-American red hair with freckles made him likable and genuinely real to movie-goers. His acting skills were displayed in a wide variety of pictures which ranged from light-hearted musicals to stirring dramas. Through the various genres, however, he frequently played a member of the Armed Forces. For the Van Johnson blogathon honoring Mr. Johnson’s 101st birthday, I am going to write about an early Van Johnson picture from MGM in which the twenty-nine year old actor plays a heroic Army pilot, Thrill of a Romance from 1945. 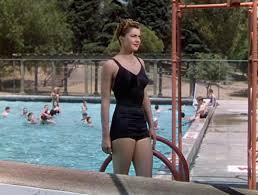 Cynthia Glenn is a beautiful young swimming teacher who lives in Los Angeles, California. While she is teaching her lovable, youthful pupils in a public pool, she catches the eye of a slick but unemotional industrial wizard, Bob Delbar, who sweeps her into a whirlwind courtship.

Her family is neither serious nor worried, since she lives with her fanciful, capricious Aunt Nona and Uncle Hobart. The contented, childlike eccentrics only want to see their niece happily doing what brings her pleasure. Within a month of meeting Bob, Cynthia marries him. 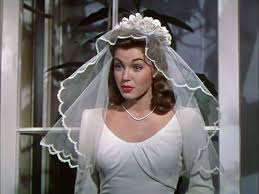 He takes her to the luxurious Monte Belva mountain resort for their honeymoon. The other guests of the hotel include a famous opera singer, Nils Knudsen, a war hero, Major Thomas Milvaine, Tommy Dorsey and his fabulous band, and Maude, the daughter of Bob’s main business associate, J. P. Bancroft. Before the Delbars have even had a chance to eat dinner together, Mr. Bancroft calls and demands that Bob join him in Washington, D. C., to finish an important business merger. Bob is reluctant, but he agrees to leave immediately. 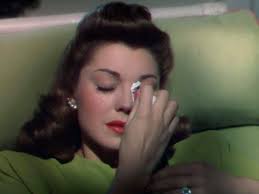 He leaves his beautiful blushing bride alone in the bridal suite to spend her wedding night crying lonely, miserable tears. Thomas Milvaine has the suite next to hers, and he is troubled to see her crying on her balcony. From the proper distance of his own balcony, he sweetly tries to console her. The next day, she runs into Thomas again, this time in the swimming pool.

They quickly make friends, and she offers to teach him how to swim. The steak and beer loving Mr. Knudsen, who is painfully trying to lose one hundred pounds, also becomes a good friend of the young Mrs. Delbar. The wise, mature tenor and the young, sympathetic pilot help Cynthia pass the dismal two weeks during which her husband is gone.

As the amiable trio enjoys the various activities of the resort, their friendship grows. However, it is not long before everyone in the hotel, including Cynthia, realizes that she and Tommy are in love. The contrast between his sincere emotions and her husband’s cold personality become horribly obvious.

Tommy is too much of a gentleman to cross the line of etiquette and morality with a married woman, but both want to express their love for each other. How can this situation happily resolve without introducing the unpleasant topic of divorce? Watch this picture to find out! 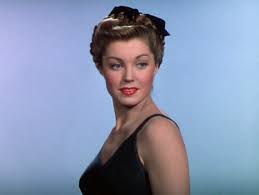 Esther Williams swimmingly plays the role of Cynthia Glenn in this aquatic musical. She looks beautiful, acts charmingly, and swims as gracefully as ever.

Van Johnson is Captain Milvaine; as in many other films, he is excellent in this role of an honorable soldier with simple charm.

Lauritz Melchior, a famous Danish, Wagnerian tenor, plays Nils Knudsen endearingly. This was the first picture he made after leaving the Metropolitan Opera Company to work at MGM.

Carleton G. Young plays the nervous, greedy husband of the vivacious, sweet swimming teacher. While his bride would be content with simple pleasure, he is obsessed with making more and more money, even though he already is a millionaire.

Tommy Dorsey and his band, playing themselves, provide excellent musical accompaniment throughout the film. 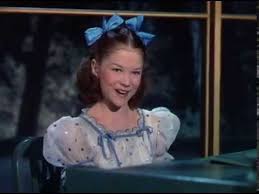 They are joined by Helene Stanley, an excellent young pianist who plays Susan Dorsey, the bandleader’s niece.

Naturally, the powerful Lauritz Melchoir entertains pleased listeners on and off the screen with his amazing voice.

Of course, Esther Williams swims through this watery musical, which is a musical pageant that shows her talent in a simpler fashion than many of the aquatic spectacles which Busby Berkeley choreographed for her.

This 1945 picture is a Breen film from the middle of the Golden Code era. It truly deserved its Production Code Administration seal. This film contains an excellent solution to the problem of annulments in films. It is a fine example to breeners, who will find this tactic useful in films such as It Happened One Night from 1934 and You Can’t Run Away From It from 1956. Within hours of returning from Washington, having been gone for over a week, Bob proves himself to be an unfeeling, selfish, and suspicious husband. He accuses his devoted bride of infidelity because she was walking in the woods with Captain Milvaine; he angrily offers her an annulment and a settlement. She does not want any money, but she accepts the offer of an annulment. Although it is not clearly stated in the Code, divorce and remarriage were infrequently depicted with the leading sweethearts when Mr. Breen was in charge, since the Catholic Church condemned remarriage after divorce. Even though they are only married in name, it is not ideal. Thus, it is rather disturbing from a Code standpoint to have the leading lady be married before her marriage to Tommy, which is imminent. However, things are not left so poorly arranged. Bob calls his lawyer and says that he wants to get an annulment. In alarm, his lawyer says that he can’t be married again, since he is not officially divorced from his last wife. Up to this point, neither Cynthia nor the audience knew that he had been married before. This news makes it obvious that no annulment is necessary, since their marriage was illegitimate. Because of this, it was very fortunate that he was called to Washington right after the marriage. You see the handiness of this device? This scenario is not just a convenient Code solution to an unfortunate situation; it is a probable situation among those who marry and divorce quickly and frequently. This is an easily added scenario to this film which makes everyone happy. 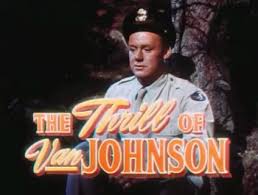 Van Johnson is very sweet and charming in this film. Captain Milvaine is tender, warm, and sympathetic, yet he always remains a gentleman.

This picture made Van Johnson very popular. When it premiered at the Egyptian Theater in Hollywood, he was mobbed by a crowd of adoring fans who tore his clothes and pulled his hair. They seem to have gotten a little too excited. This is one of Mr. Johnson’s finest films, and it is a gem from the Breen era.

I would like to thank Michaela from Love Letters to Old Hollywood for allowing me to participate in this blogathon. I hope you will join my blogathon, “The Great Breening Fest,” which I am hosting with the Flapper Dame in October: https://wordpress.com/post/pureentertainmentpreservationsociety.wordpress.com/4858. Until then, enjoy all the articles about Van Johnson! 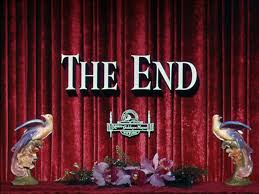 2 thoughts on “Van Johnson in “Thrill of a Romance””