This article is part of “The Workplace Blogathon” at Moon in Gemini: https://debravega.wordpress.com/2017/07/09/announcing-the-workplace-in-film-tv-blogathon/

When Lew Ayres was a boy, he wanted to be a doctor. Like many boys with this dream, he did not seriously pursue a medical career during high school. In his senior year, he dropped out of school to go to Mexico with a band. He was discovered by a talent scout when he was nineteen years old, and he quickly became a successful actor. One would think that this would have ended the possibility of a medical career for him forever. This was not the case with Lew Ayres, however. Being a doctor was definitely in his future.

In 1932 Lew Ayres made his eleventh feature film, The Impatient Maiden, a Universal picture in which he starred with Mae Clarke. She plays a secretary, and he plays a medical intern. This was his first time playing a doctor, but it certainly would not be his last. Between 1938 and 1942, he played Dr. Kildare in the nine film MGM series. This was the pinnacle of his entire career. In World War II, Mr. Ayres, who was opposed to fighting, applied for medical corps duty. As he served as a medic in war zones in the South Pacific, he was closer to being a doctor than he was during any other part of his life. After the war, his first film role was that of a psychiatrist in The Dark Mirror from 1946. In 1948, he was nominated for his only Best Actor Academy Award for playing Dr. Richard Roberts in Johnny Belinda. One of his last leading roles was that of a doctor in Donovan’s Brain from 1952. In 1949 and 1950, he reprised his role of Dr. Kildare on the radio. All of this, however, began with Dr. Myron Brown in The Impatient Maiden. Myron Brown is a medical student who is doing the second year of his internship at the Virgin Hospital in Los Angeles, California. An interesting side note is that this was the first film set in Los Angeles which had nothing to do with the movie industry. He is strictly “off women,” since he believes that he is in no financial position to be anything but businesslike. He can’t afford to get married, and it will be at least two years until he has even developed any sort of medical practice, so he doesn’t think he should have anything to do with girls until then. All this changes when he meets Ruth Robinson, a pretty working girl who is the secretary for a divorce lawyer. The day after he has met her, Myron knows that he is madly in love with Ruth. He offers to quit his internship and get another job so they can get married right away. However, there is more between them and the altar than their financial situation. Ruth has been soured on the idea of marriage by her experience with the failed marriages which pass through her employer’s office. She is afraid of marriage, and she sees no reason why the law should “make puppets” of them. If they love each other, she thinks that they should be devoted to each other without marriage. Myron knows that living together out of wedlock would not be love. Since he won’t continue their relationship without marriage, and she won’t get married, they part company. Myron is heartbroken, but he throws himself into his work. Soon after, Ruth realizes that her boss is interested in her. He offers to rent her an apartment in his building at a discount rate, guaranteeing that it will remain proper. However, it is only a matter of time before he will demand a less honorable situation. Will Ruth surrender to his advances and travel the world in style, or will she overcome her aversion to marriage so that she and Myron can live happily ever after together? 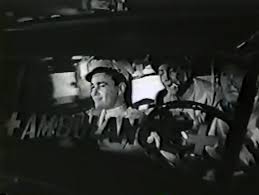 In the 1930s, hospital interns were sent out in the ambulances with two attendants. It was a brilliant idea, since interns got practical experience with many medical emergencies, and patients got assistance from well-trained doctors instead of medics. The Impatient Maiden is one of the interesting films which shows us this old ambulance system. Myron Brown is an intern who performs ambulance duty with his best friend, Clarence Howe, who is a “gentleman nurse,” and a driver. 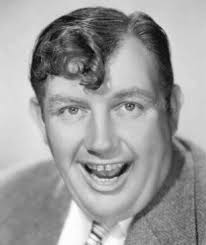 Clarence Howe is funnily played by Andy Devine. Thus, Myron’s workplace is usually outside the hospital.

When you first see him, Dr. Brown is betting Clarence that he can save the suicide case they’re about to treat. Although it is a good incentive for Dr. Brown, it seems somewhat unethical for Clarence to bet a dollar that their patient is going to die. This first case is a pregnant woman who tried to kill herself with gas because her husband left her. She was discovered unconscious by her levelheaded neighbor, Ruth Robbins, who quickly called the other neighbors to action. When Myron arrives, he and Ruth immediately begin a quick, witty exchange of sarcasm. Upon first seeing the very young Myron, Ruth says that she thought there would be a doctor. Looking rather offended, Myron says, “Oh, well, we don’t wear beards anymore.” Myron and Clarence are so good at their work that they can save the gas victim and have rapid exchanges with the young ladies from the next apartment at the same time.

Clarence has a good time making fun of Ruth’s dimwitted Southern roommate, Betty, who is comically played by Una Merkel. However, when he finds out she can cook delicious food, he changes his mocking to mashing. As Myron examines Ruth’s side pains from a bad appendix and leg cuts from pieces of broken glass, she thinks that it is “a new way of getting fresh.”

Although Myron is very respectful, you can tell that his concern for her is not just because she is an interesting case. The next day, he invites the girls to come over to the hospital and visit Mrs. Gilman, their unfortunate neighbor. When he tells Ruth not to eat before coming, she thinks it is a breakfast invitation. As usual, it is just part of his medical career. He wants to take an X-ray of her appendix.

Afterwords, he realizes the misunderstanding and takes her to a cafe. He is still very professional, since he carefully orders a meal for her which will be good for her appendix. As he is explaining the dilemma of an intern’s romantic life, a commotion is heard outside. He rushes out to help the victims of the automobile accident. No matter where he goes, Myron Brown is in his workplace. Although it seems that his medical profession will hinder his romance with Ruth, it eventually brings them back together in an ironic way. 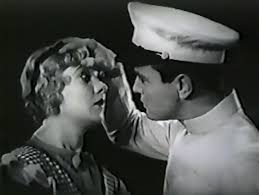 There is some interesting medical footage in this picture. It gives the audience a good opportunity to see various medical equipment, including a fluoroscope and a special zipper straight jacket which Clarence invented and Myron helped finance. There also is a lengthy operation scene. It is longer than the average Code film operation, but nothing is actually shown. It is interesting to imagine that the actors are really a medical staff. I think the length of this scene, which comes at a critical moment of the story, was used to build tension.

Although this is a pre-Code film, it is very clean. The improper content is almost exclusively in individual lines or inconsequential scenarios. The plot has what Joseph Breen called “compensating moral values.” This film’s best characteristic is Myron’s moral view of marriage. Pre-Code films abounded with loose women who were willing to not be married and men who were more than willing to accept the situation. As Mae West said, “When women go wrong, men go right after.” This film has a woman with loose morals, Ruth, who doesn’t believe in marriage because of her job and a cynical uncle’s advice. Betty is somewhat stupid but a voice of moral reason. She is very romantic, but she just wants to get married. Ruth calmly offers a long term commitment to Myron; she wants to live like they are married without being married. She is not a loose woman who goes from man to man like Kitty in The Public Enemy or a woman of ill repute like Myra in Waterloo Bridge. She seems like just a good girl gone wrong. Many people probably wouldn’t think that such things were common in the 1930s. They really weren’t; most young couples got married. However, Hollywood was suggesting and depicting more immoral relationships than wholesome marriages in those days. There was a dangerous trend toward a rejection of marriage. It is a good thing that Mr. Breen and the Production Code Administration put an end to Hollywood’s suggestion of such things in 1934.

I have great respect for Myron Brown. After his second date with Ruth, he is evidently crazy about her. He can’t stop calling her on the telephone, even though it is the middle of the night. He eventually comes over to see her. He knows that they must get married since he loves her so much. When Ruth basically throws herself at him, he simply turns down the offer. He says, “That wouldn’t be love,” and he is right. It would be nothing more than “a biological reaction,” so they would lose all respect for each other. He loves her too much for that. This is a very noble moment for him. Lew Ayres wasn’t noted for playing the strongest of roles. He usually played the nice fellow or the boy next door. However, it took a lot of strength for a man in that cinema sea of amorous immorality to say no. Women are supposed to be the moral sex, but men can say no, too. Clark Gable and James Cagney were noted for playing such strong, aggressive roles, but their characters easily succumbed to the wiles of loose women played by Jean Harlow and the like. Myron Brown stands apart as a man who is strong enough to resist temptation. That is more powerful than hitting someone in the nose or sweeping a woman off her feet.

I would like to thank my hostess, Debbie, for allowing me to participate in this enjoyable blogathon. I hope that my readers will want to see this excellent film because of my article. It can be watched for free on YouTube: https://www.youtube.com/watch?v=dvCvLwRn0Io. It is not a very clear recording, but this film is out of print, so you can’t find much better quality anywhere. Hopefully, someone will remaster and release it on DVD someday. Until then, I hope you will enjoy this copy of it. Perhaps Myron will be an inspiration for men and an ideal for women of a proper beau. He certainly is a fine example of a doctor; only Dr. Kildare can compare with him in my opinion. The next time you call for an ambulance or visit the hospital, be sure to ask for Dr. Myron Brown. Give him my regards, will you?

8 thoughts on “The Impatient Maiden & The Moral Intern”