This article is part of the Swashathon at Movies Silently: http://moviessilently.com/2017/07/14/the-swashathon-is-here/

Many classic films contain great dancing, others contain exotic period settings, and still others contain exciting adventure with swashbuckling drama. Not many pictures contain all three, but The Pirate from 1948 does! When I decided to join the Swashathon at Movies Silently, I knew that I wanted to review this film, which combines thrilling action with beautiful music and charming scenarios that should please any old-movie lover.

This is the tale of a beautiful Spanish maiden, Manuela, who lives in a Caribbean village and dreams of romance with a pirate, Macoco. Judy Garland charmingly plays Manuela; she sings, dances, and dreams the character to vivid life. In the beautiful Technicolor, she looks lovely in her period Spanish costumes.

Gene Kelly plays Serafin, a romantic traveling actor who comes to town; he will play any part to win the heart of the beautiful Manuela. Gene Kelly is exquisite as this dashing, mashing actor who sings, dances, performs acrobatic feats, and even does a little magic as he mesmerizes audiences and tries to woo Manuela. Judy Garland was British, Scottish, and Irish, and Gene Kelly was obviously Irish, yet they both are very convincing as Spaniards. Mr. Kelly could easily be a Senor Consuelas in his dark makeup, curly black wig, and thin mustache, and Judy Garland looks like a Senorita Gomez. 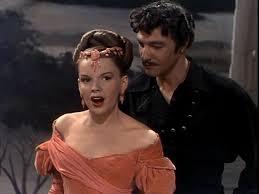 Manuela dreams about “Mack the Black,” the dashing, romantic, exciting pirate of legends. None of the local men will satisfy her, since they cannot compare to the daring masculinity of a violent pirate. She daydreams that Macoco is still alive and will someday come and take her away with him on his ship. Unfortunately, she faces the dismal reality of having to marry the dreadfully dull and respectable mayor, Don Pedro. The fat old man has traveled in the past, but now he just wants to stay home and be peaceful and quiet. When Manuela goes to Port Sebastian with her aunt to pick up her wedding dress and get one glimpse of the Caribbean Sea, she meets a bold actor, Serafin. He is fascinating and fascinated, and he invites her to his troop’s show that night. She acts insulted and superior. However, that night, she is restless in her hot bedroom, so she ventures down to their show, which she could hear clearly. Serafin mesmerizes her with a revolving mirror, and she confesses that she is in love with Macoco. She sings and dances wildly before he breaks the spell with a kiss. She flees in horror.

The wonderful irony of this film delights me every time I see it. Manuela is a romantic young woman who dreams of an exciting future with a legendary pirate. I can relate to her desire for romance and adventure, although I never have dreamed of marrying a pirate. She is engaged to an older man who is the complete opposite of the man she admires, Macoco. The marvelous irony of the situation is the fact that he is Macoco, or rather, he was. He escaped the dangerous, infamous career with his life, a chest full of treasure, and a weak heart. Now he just wants to marry Manuela, have a quiet, respectable life, and forget his past criminal life. When Serafin comes to their quiet village, he tries to woo Manuela on her very wedding

day to Don Pedro. Don Pedro threatens to have him whipped for his advances, but he is helpless when Serafin realizes that he is Macoco. Years earlier, Serafin was the lone survivor of a ship which Macoco plundered. Don Pedro is desperate to keep his secret, so he agrees to Serafin’s dastardly plan to win Manuela’s heart; he is going to pretend to be Macoco, who is currently disguised as an actor. Can

Serafin keep his deception going long enough to sail away with Manuela? Will she believe him? How long will Don Pedro be able to withstand the humiliation of seeing an actor masquerade as himself? Can Serafin win his lady without losing his life at the hands of the authorities, who still hang pirates?! Watch this film right away to find out! 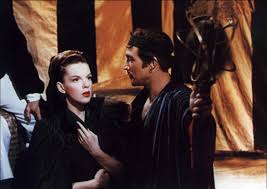 I love Judy Garland’s exciting number, “Mack the Black,” which she performs after being hypnotized by Serafin. She throws off her cloak, under which she is wearing only the white top of her nightgown with her skirt , and sings like she has always dreamed of doing. The exciting number by Cole Porter captures the Caribbean theme and thrilling drama that is associated with pirates. To get a preview of this exciting number before you watch the full movie, here it is on YouTube: https://www.youtube.com/watch?v=lJWTRK2yObU. The original theatrical trailer also is an excellent precursor to the film which captures the true spirit of the picture. You can see it here: https://www.youtube.com/watch?v=c18WhJb80h4. 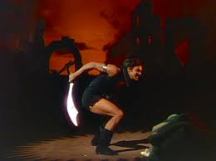 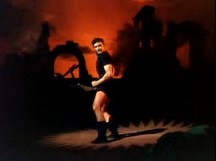 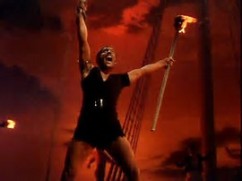 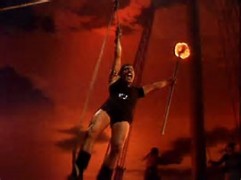 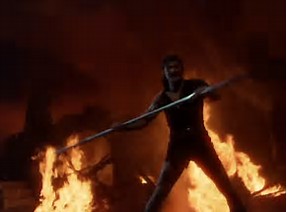 Since this blogathon is dedicated to swashbuckling, I must say a few words about the piratical climax of the film, Gene Kelly’s Pirate Ballet. After Serafin has declared himself to be Macoco in front of the whole town, he frightens the mayor’s guards with a whip. Then, aware of the fact that Manuela is watching him from her window, he begins to dance around a white donkey which is sitting in the square. As she watches this dance, it is transformed in her mind to her ideal of him as a pirate. The donkey becomes a frightened woman in a white dress with white ears on her head, and the simple square becomes a dramatic pirate setting with fire and burning ships. Macoco is now wearing a black pirate costume with a bandana around his head and a cutlass in his hand. In this dance, Gene Kelly leaps around the huge set, performing his own dangerous stunts with skill and dispatch. He plays with swords and fire as though they are harmless. He swings on ropes amid treacherous shipmates, chests of treasure, burning ships, and lady hostages. All this flashes through Manuela’s mind and across the screen for us to see. Even if you don’t watch the whole picture, you must watch this number: https://www.youtube.com/watch?v=UVv6FTKC92U. It begins after her fantasy has begun, since it does not include the opening part with the donkey. After all the excitement, the dramatic pirate’s setting returns to the simple square. However, although he is no longer in a sinister black outfit, Macoco is still there, so Manuela’s exciting dream is becoming a reality 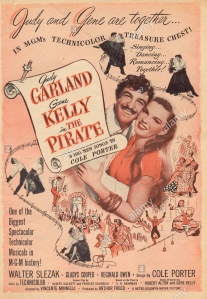 I hope you enjoyed my description of a musical adventure into the realm of swashbucklers. MGM knew how to make grand Technicolor musicals, and this film is a shining example. The exquisite Cole Porter score, which also features Gene Kelly’s number “Nina,” Judy Garland’s numbers “You Can Do No Wrong” and “Love of My Life,” and their duet, “Be a Clown,” adds color and variety to the picture. Gene Kelly’s daring stunts and thrilling swordplay make this a swashbuckling film which even people who don’t like violence can enjoy. The drama is tempered with sentiment, music, and comedy. Watch this marvelous Code film today!

12 thoughts on ““The Pirate:” A Tale of a Romantic Spanish Maiden and a Swashbuckling Caribbean Actor”